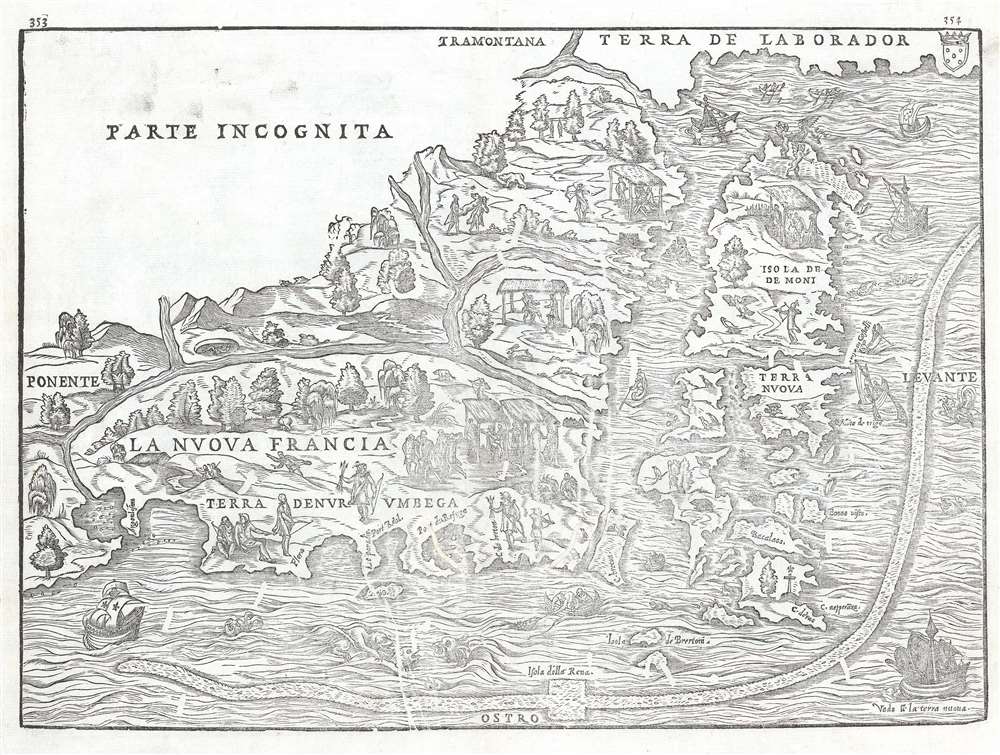 An edition of the earliest acquirable image of the American Northeast.

This is the seminal 1556 / 1606 Giovanni Battista Ramusio map of the Northeast and Canada, 'The first printed map devoted to the New England region' (Osher) and the first map to apply a specific name to Canada. The map depicts the northeastern coast of North America from New York to the coast of Labrador, inclusive of New England and maritime Canada. In particular, it is the first map to reveal Giovanni da Verrazano's 1524 voyage to America and to depict his discoveries in what would become New York and New England. It is also among the most visually engaging early maps, being richly decorated with depictions of indigenous peoples, Europeans, flora and fauna, sailing ships, sea monsters, and demons (indeed, the map features an island named Isola de Demoni and shows its denizens replete with horns, hooves, tails and wings.)

The Ramusio is the first printed map to reveal Verrazzano's discoveries in New York and New England, and is consequently the first map to show New York Bay and Harbor. This appears in the lower left corner of the map; the peninsula to the east of the bay is identified as Angloulesme, a term Verrazzano applied to what is now known as western Long Island and Brooklyn, to flatter his French sponsor, Francis I. The notoriously dangerous and rock strewn waters of Upper New York Harbor are illustrated by numerous tiny islands. Continuing eastward along the coast, Flora is most likely the eastern tip of Long Island, Montauk. Port Real is Newport Bay, and Port de la Refuge corresponds to Narragansett Bay. This would suggest that the island of Briso is an early depiction of Block Island and the dual Isola de Brertoni, Nantucket and Martha's Vineyard. The curious constriction of the coastline between Narragansett Bay and Cape Breton is the result of Gastaldi's attempt to reconcile Verrazzano's journey with those of Cartier. He made the erroneous assumption that the northernmost point of Verrazzano's exploration, Narragansett Bay or Port de la Refuge, was close to the southernmost point of Cartier's voyage, Cape Breton Island, thus compressing the two and, alas, omitting Cape Cod.

Verrazzano, again in honor of his French patronage, named the lands he skirted Francesca. Ramusio translates this on the map as Nuova Francia, or 'New France,' making this the first map to name Canada. Verrazzano's cursory survey is improved upon by the results of Cartier's 1534 and 1535 voyages, revealing what we now know as the Gulf of St. Lawrence and the island of Newfoundland, named Terra Nuova here. Cape Breton Island is identifiable and so labeled. The snakelike band wrapping around the coastline represents the Grand Banks and the square area, identified as Isola d'ella Rena or 'Island of Sand,' can only be Sable Island. The Grand Banks were long known to the Portuguese and the Bretons as a rich fishing ground. This point is emphasized by the number of fishing boats pictured near the banks and amongst the islands, one of which is actually named 'Bacalaos' - the Portuguese word for codfish.

Verrazzano's appellation 'Francesca' did not appear in a vacuum, as the first European claims to this region were not French, as Ramusio acknowledges in this map. The Labrador coast is marked here with the arms of Portugal, as are the sails of one of the many ships plying the fishing grounds. Verrazzano and Cartier both sailed for the French, however, and Ramusio's map emphasizes France's growing influence not only by adopting Verrazzano's nomenclature, but also symbolically: both of the ships sailing to New France in the lower corners of the map bear Fleurs-de-lis on their sails. The message appears to be that whatever the Portuguese have found around the world, the French ought to be able to take it with relative ease.

A notable interior feature of this map is its puzzling upstream conjunction of the Hudson River with the St. Lawrence. Though Gastaldi's 1548 map shows the mouths of these rivers, it neither completes nor joins them; so it is not clear whether the idea that they might do so was Gastaldi's or Ramusio's. Verrazzano did not venture far up the Hudson, but Cartier's second voyage went as far as Montreal, so the thought that the rivers might have an association may have derived from those reports. After all, today a network of canals do indeed connect the two rivers.

The New York/Connecticut coastline is presented on a disproportionately large scale. While this may also be a misinterpretation of its extensive treatment in Verrazzano's journals, it may also reflect European fascination with the legendary land of Nurumbega (Norumbega), here occupying much of that coastline. This mysterious land appears on a printed map for the first time on Gastaldi's 1548 map; overall, it first comes to light on Verrazzano's 1529 manuscript map of America. He used the term, Oranbega, which in Algonquin means something on the order of 'lull in the river.' The first detailed reference to Nurumbeg, or as it is more commonly spelled Norumbega, appeared in the 1542 journals of the French navigator Jean Fonteneau dit Alfonse de Saintonge, or Jean Allefonsce for short. Allefonsce was a well-respected navigator who, in conjunction with the French nobleman Jean-François de la Roque de Roberval's attempt to colonize the region, skirted the coast of south of Newfoundland in 1542. He discovered and apparently sailed some distance up the Penobscot River, encountering a fur rich American Indian city named Norumbega - somewhere near modern-day Bangor, Maine. Andre Thevet, writing in 1550, recorded encountering a French trading fort at the site. A few years later in 1562, an English slave ship sank in the Gulf of Mexico. David Ingram, one of the survivors, claimed to have trekked overland from the Gulf Coast to Nova Scotia where he was rescued by a passing French ship. Possibly inspired by Mexican legends of El Dorado, Cibola, and other lost cities, Ingram returned to Europe to regale his drinking companions with boasts of a fabulous city rich in pearls and built upon pillars of crystal, silver, and gold. The idea caught on in the European popular imagination and expeditions were sent to search for the city - including that of Samuel de Champlain.

This map was first engraved by Matteo Pagano for inclusion in the third volume of Ramusio's Navigationi et Viaggi in 1556. The woodblocks for this, and indeed all of the maps of the 1556 edition burned in a warehouse fire in 1557. It appears in only one known state. The blocks were all re-engraved, probably again by Pagano, for the 1565 edition of the Navigationi et Viaggi. This second block is geographically identical to the first, but is somewhat more skillfully executed; the two blocks are most easily distinguishable by the addition of willow trees on the new version. The second block was employed one more time in 1606, this edition easily identifiable by the small worm-shaped blank areas visible on the map (woodworm appears to have similarly infested all blocks of the 1606 edition.) The 1556 edition of the third volume of Navigationi et Viaggi. is rare. Seven examples of the 1565 are listed in OCLC, while perhaps twenty of the 1606 edition appear in institutional collections. The separate map appears eight times in collections in this edition.

Giocomo Gastaldi (c. 1500 - October, 1566) was an Italian astronomer, cartographer, and engineer active in the second half of the 16th century. Gastaldi (sometimes referred to as Jacopo or Iacobo) began his career as an engineer, serving the Venetian Republic in that capacity until the fourth decade of the sixteenth century. During this time he traveled extensively, building a large library relating to voyages and exploration. From about 1544 he turned his attention to mapmaking, working extensively with Giovanni Battista Ramusio, Nicolo Bascarini, and Giovanbattista Pedrezano, as well ask taking private commission for, among others, Venice's Council of Ten. He is credited with the fresco maps of Asia and Africa still extent in the map room of the Doge's Palace. Gastaldi was also one of the first cartographers to embrace copper plate over woodblock engraving, marking and important development in the history of cartography. His 1548 edition of Ptolemy's Geographia was the first to be printed in a vernacular; it was the first to be printed in copperplate. As with his Swiss/German contemporary Münster, Gastaldi;'s work contained many maps depicting newly discovered regions for the first time, including the first map to focus on the East Coast of North America, and the first modern map of the Indian Peninsula. His works provided the source for the vast majority of the Venetian and Roman map publishers of the 1560s and 70s, and would continue to provide an outsize influence on the early maps of Ortelius, De Jode, and Mercator. Learn More...


Giovanni Battista Ramusio (July 20, 1485 - July 10, 1557) was an Italian civil servant, humanist, scholar, historian, and geographer active in the middle part of the 16th century. Ramusio spent most of his life in the service of the Republic of Venice, first as part of that state's embassy to France, and later as a reporter on voyages and discoveries. He was born to an illustrious family in Treviso and moved to Vencie as a young man, where his father was a magistrate. He studied at the University of Padua but may not have received a full degree. He entered the civil service shortly after leaving the university and was immediately assigned to diplomatic service for his facility with languages, particularly French. His most significant contribution to cartography is his publication of Navigationi et Viaggi a collection of travel narratives he collected in his service to the state. The narratives include those of Marco Polo, Niccolò Da Conti, Magellan, Alvar Nuñez Cabeza de Vaca, Giosafat Barbaro, and Tomé Pires, among others. Some of the voyages appearing in the Navigationi et Viaggi are otherwise unknown, marking it as an exceptionally important volume. Ramusio died in Venice in 1557. Learn More...