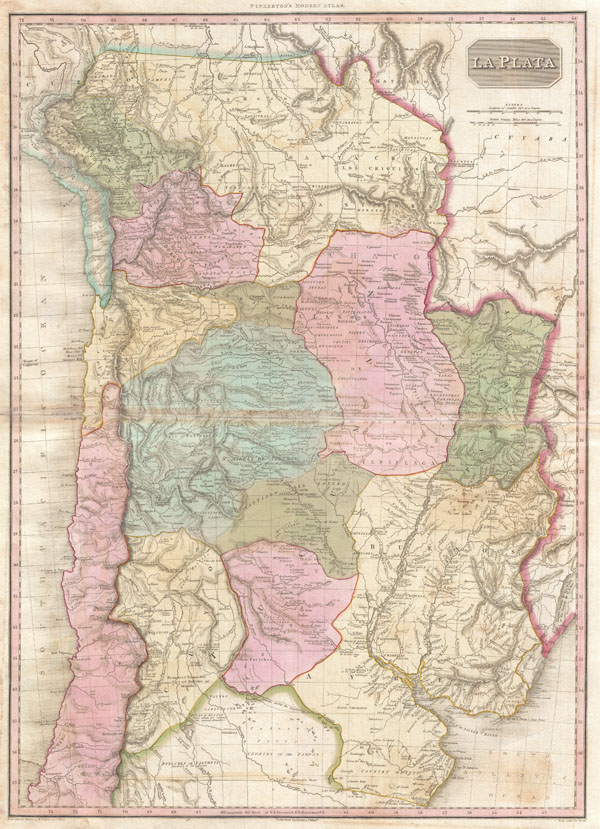 A significant advance in the mapping of the Amazon Basin.

An altogether extraordinary 1818 map of the southern parts of South America by John Pinkerton. Covers the modern day countries of Argentina, Bolivia, Paraguay, Chile as well as parts of adjacent Brazil and Peru. Pinkerton offers impressive detail throughout noting indigenous groups, missions, towns and cities, swamps, mountains, and river systems. Upper left hand quadrant features the title plate and two distance scales, one in British Miles and the other in Castile Leagues.

Cartographically speaking this is an often neglected part of the world - especially in the early 19th century. Though the coastlands and open plains had been well mapped early in the 16th century, the interior was rarely penetrated. The combination of mountainous terrain, daunting jungles, malaria, and unfriendly indigenous groups combine to make this area all but unexplorable - even today. Nonetheless, Pinkerton make a commendable attempt to piece together early conquistador accounts, explorer's journals, missionary records, and indigenous reports into a coherent mapping of the area. In doing so he achieves a number of significant advances in the mapping of the region.

In general, this map reads like a litany of disappointment. The number if ruined towns, abandoned missions, forgotten mines, and destroyed settlements would be hard to match in any other map. Pinkerton notes the ruins of La Conception, St. Isabel, Santa Cruz de la Sierra, and Guadalcazar to name but a few. In the Andes, he identifies the sites of a number of important mountains and volcanoes including Aconcagua, Coquimbo, Petoroa, and others. He also identifies the site of the majestic ruined pre-Columbian city on the shores of Lake Titicaca.

Traditionally cartographers identified the apocryphal Lake of Xarayes as the source of the Paraguay River. In earlier days, explores associated this lake with legends of Paradise, El Dorado, and the gateway to the Amazon. The lake itself, though never existed. Instead it was a misinterpretation of the vast Pantanal flood plain during the rainy season. Here Pinkerton abandons the notation of a 'Lakes of Xarayes,' instead identifying numerous 'Lakes of Xarayes,' and in doing so come much closer to the truth. This is the first map to exhibit this change which is itself a significant advance the mapping of the Amazon Basin.