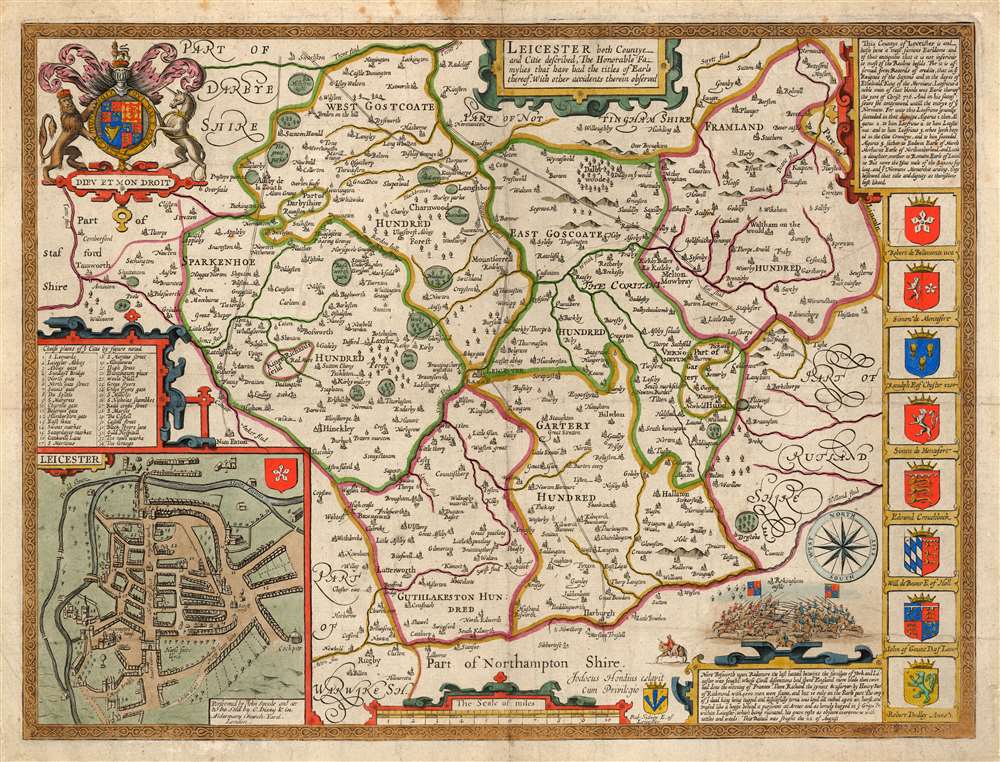 Marking the Momentous Battle of Bosworth.
$750.00

This is John Speed's 1770 map of the East Midlands county of Leicestershire, England. It was first included in Speed's county atlas and remained in publication long after Speed's death, and in this case this specific map was printed in Cluer Dicey's scarce, final edition of 1770. The map is richly detailed, showing towns, abbeys, castles, forests, and parklands. An inset plan in the lower left details the walled town of Leicester with a key naming thirty-four streets, gates and buildings. Along the right side of the map are displayed the armorial crests of eight of the historical Earls of Leicester. At the bottom are the arms of Robert Sidney, the second Earl of Leicester (probably added by Bassett and Chiswell in 1676). At the upper left are the Royal Arms, with the motto 'Dieu et Mon Droit.'

The Battle of Bosworth

The map is notable for its depiction, at the bottom right, of the Battle of Bosworth: the last important battle of the fifteenth century Wars of the Roses (1455 - 1478). It was fought on August 22, 1485, and won by an alliance of Lancastrians and disaffected Yorkists, who defeated the last king of the House of York. The battle is presented - much after the fashion of Shakespeare's memorialization of it - as a personal defeat of Richard III at the hands of Henry Tudor, the first English monarch of the Tudor dynasty. Richard III was killed during the battle - the last English monarch to die in combat. The site of the battle is marked on the map as 'Kinge Richards Feild' The battle scene here is attended with a descriptive text:

Nere Bosworth upon Redemore the last battail betwixt the families of York and Lancaster was fought. Whose Civill discentions had spent England more blode than twice had done the winning of Frannce. There Richard the tyrant and usurper by Henry Earl of Richmond with 4000 men were slaine, and but 10 only on the Earls part. The corps of ye dead King being tugged and dispitefully torne was layd all naked upon an horse, and trussed like a hogge behind a pursivant at Arms and as homely buryed in ye Graye Fr. within Leicester, which being ruinated, his grave rests as obscure overgrowne with nettles and weeds. This battail was fought the 22 of August.

The sharp-eyed reader will spy the horse leaving the battlefield to the left, with the stripped body (presumably of the hapless Richard III) draped across its back. The presumed location of Richard III's burial, Greyfriars, is marked as item 23 on the town plan.

This map was engraved by Jodocus Hondius in 1608 for inclusion in John Speed's The Theatre of the Empire of Great Britaine, published in London by Sudbury and Humble in 1614. It continued in publication in the atlas in all its editions, including those that were bound together with Speed's A Prospect of the Most Famous Parts of the World. This example bears the imprint of Cluer Dicey, whose scarce edition of Speed's atlases was published in 1770 and was the final imprint of the long-lived work. Perhaps twenty-seven examples of the separate map, in various editions, appear in institutional collections. None of these, however, is of the present Dicey imprint, which appears to be rare.


Cluer Dicey (1714-1775) was an English printer, publisher and engraver. He was the son of printer, engraver and newspaperman William Dicey (1690-1756), from whom it appears he learned the trade. Cluer joined his father in the business and took charge after William's death. Among other works, he republished the county maps of Christopher Saxton, and produced the final 1770 edition of John Speed's atlas of England and Wales. Learn More...

Speed, John, The English Atlas, or a Complete Set of Maps of all the counties in England and Wales, (London: Dicey, C.) 1770.