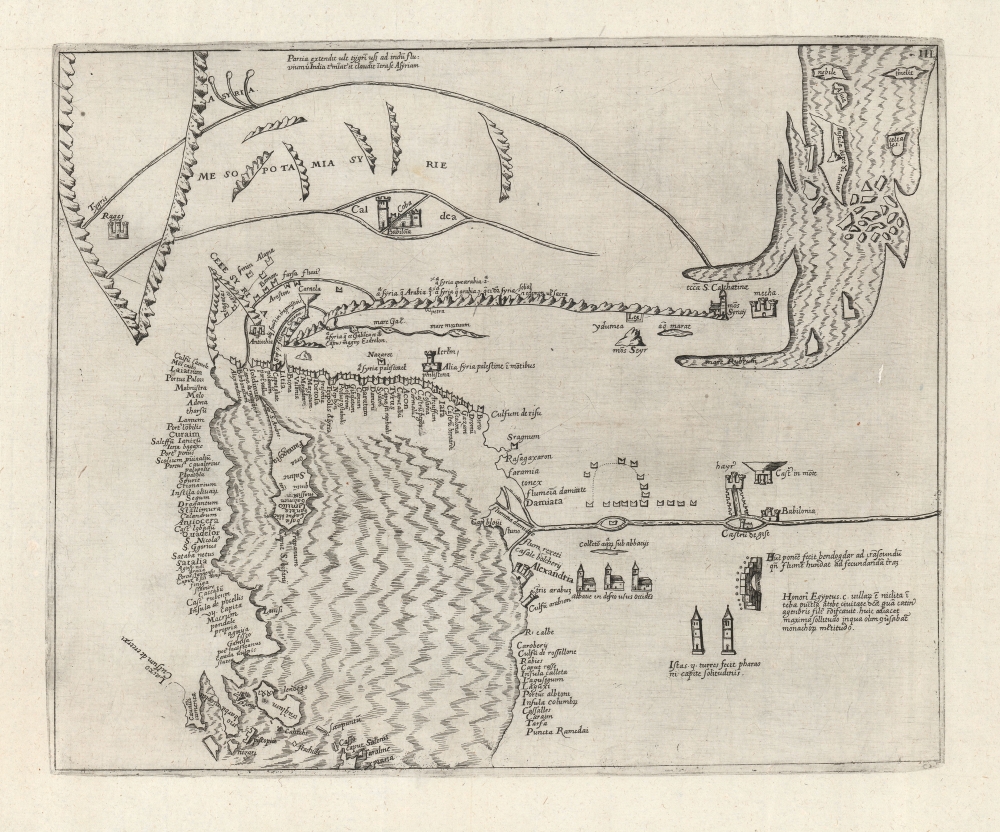 Earliest printing of a Military Portolan of the Eastern Mediterranean.
$4,000.00

This is the earliest printed iteration of Pietro Vesconte's 1611 portolan map of the Eastern Mediterranean, the Lower Nile, the Arabian Peninsula, and Mesopotamia. While not committed to print until this 1611 edition by Jacques Bongars, the map is the work of the 14th-century Venetian cartographer Vesconte, who produced it c. 1320 to promote Marino Sanudo's proposed crusade. As such, it is one of the earliest surviving maps to support a specific military effort.

This printed map is a faithful copy of a 14th-century manuscript, and thus pre-dates the European rediscovery of Ptolemy's Geographia. Consequently, the map lacks Ptolemy's precision, systematic scale, or conventions of orientation. The map is oriented to the east with the eastern Mediterranean, indicated with hachured waves, at bottom just left of center. The eastern tip of the Crete appears at the base along with the archipelago, including Scarpanto and Rhodes. The map follows the coast of Asia Minor, listing the locations in the manner of a Portolan. A very large Cyprus is depicted south of Asia Minor. Note the orientation of the placenames on the island suggesting a direction of travel from east to west, as distinct from the placenames elsewhere leading towards the Holy Land. Beyond Cyprus, place names along the coasts of Lebanon and Palestine are also rotated to facilitate travel. Both within the Holy Land and on the Egyptian coastlines, major cities and fortifications are shown pictorially.

The Mediterranean commands the lower left corner, which abandons scale in order to place the region in a broader scope. The lower right depicts Egypt. The Nile delta and the Mediterranean coast approaching Alexandria share the portolan-esque quality of the rest of the Mediterranean chart, but points south depict details in a much more schematic, mappamundi-like manner, showing Egypt's western fortifications as well as its castles along the Nile. The upper left describes Mesopotamia: the Tigris and Euphrates Rivers, the city of Babylon, and the distant lands of Assyria and Persia. The rivers reach southwards towards the Persian Gulf. The Red Sea is named, revealing a drastically minimized Arabian Peninsula, featuring the Church of Saint Catherine upon mount Sinai, a short distance from Mecca. The waters beyond - a drastically foreshortened Indian Ocean - show an array of islands whose names (Nebile, Celtales and so on) are drawn from the Travels of Marco Polo.

One of the Earliest Military Maps

Despite the wild distortions of the southern and eastern portions of the map, the Mediterranean areas were, firstly, based on the best techniques of charting available in the 14th century. The purpose of the map was to convince the leaders of Western Europe - Pope John XXII and King Charles IV of France in particular - of the practicality of a new crusade to Capture the Holy Land. It appeared in the Venetian diplomat Marino Sanudo's Liber secretorum fidelium crucis (Book of Secrets for True Crusaders), which detailed his proposed effort to take the Holy Land for the Christian West.

This printed edition of the map appeared in Jacques Bongars' 1611 Gesta Dei per Francos, sive Orientalium expeditionum, et regni Francorum Hierosolimitani historia which collected in one volume the surviving medieval texts pertaining to France's role in the crusades. As such, it presented in print for the first time the full complement of Vesconte's maps. (The map specifically of the Holy Land, dubbed the Sanuto-Vesconte map, found its way into several of the printed editions of Ptolemy's Geographia, but the other maps such as this remained neglected.) The book, while well-represented in institutional collections, was printed in a single edition and its maps are rare on the market. One example of the separate map is listed in OCLC.

Jacques Bongars (1554 - July 29, 1612) was a French scholar and diplomat. Born in Orléans nand raised as a Huguenot, he would receive most of his early education in Germany before returning to Orléans and Bourges. He joined the service of Ségur Pardaillan, a courtier to Henry, king of Navarre (later Henry IV of France.) Pardaillan sent him in 1587 on a mission to northern Europe, and later England to obtain help from Queen Elizabeth for Henry of Navarre. He continued to travel on behalf of Henry, and to the detriment of the house of Habsburg. His service continued until the king's murder in 1610. He died in Paris not long after. Bongars produced several books, including Gesta Dei per Francos, a collection of early works pertaining to the Crusades, with a particular focus on French participation in them. Learn More...


Marino Sanudo (or Sanuto) Torsello (c. 1270 – 1343) was a Venetian statesman and geographer. He is best known for his efforts to instigate a new crusade to the Holy Land. This lifelong task resulted in his book, 'Liber Secretorum Fidelium Crucis (Book of Secrets for True Crusaders) which would be supplented by an array of the earliest surviving portolan charts of the Mediterranean coast and the Black Sea, executed by Pietro Vesconte. Sanudo was born to an aristocratic trading family in Venice around 1270; his father was a member of the Venetian Senate. In his youth Sanuto traveled broadly, visiting in time Acre, Greece, Romania, Palestine, Egypt, Armenia, Cyprus and Rhodes. He would eventually join the entourage of the Doge of Venice; after 1305 he attended Cardinal Riccardo Petroni in Rome.

He was a vigorous correspondent, particularly with travelers whose reach had extended beyond his own.

Perhaps related to his early experiences in Acre - which fell rapidly to Muslim forces shortly after his visit there - Sanuto was a lifelong advocate of a crusade to capture the Holy Lands for the west. While he was certainly not alone among such instigators, his emphasis on strategy, practical financial backing, and detailed modern cartography set his proposals apart. His long term approach - with a preparatory blockade of and capture of Egypt to secure the invasion's flank - was never implemented. Nevertheless his book, often revised and updated, would find its way into the hands of not only the Pope but also King Charles IV of France. At least eleven manuscript copies are known to survive. Its complement of maps by Vesconte are the earliest medeival maps intended for military purposes. Learn More...


Pietro Vesconte (fl. 1310-1330) was a Genoese cartographer and geographer. His early portolan charts set the standard for such works produced in both Italy and Spain throughout the fourteenth and fifteenth centuries. Very little is known of his life. He was born in Genoa, but produced the bulk of his work in Venice. His charts - among the first of any to be signed and dated - remain among the earliest to accurately chart the coasts of the Mediterranean Sea and the Black Sea; his works contain some of the earliest attempts to chart the British Isles. In addition to his separate charts, he is known to have authored no fewer than four manuscript navigational 'atlases,' consisting of particular navigational charts that could be joined to make a larger, general one. His work was groundbreaking in its accuracy: the mappamundae that characterize this period were not characterized by precision, being more in the way of mnemonic aids for the study of the world by people unlikely to actually travel it. Many of his works, however, focused on the Holy Land, and these were produced in order to encourage a crusade to those regions. Learn More...

Excellent. Some creasing at folds, else a fine example with a bold strike.