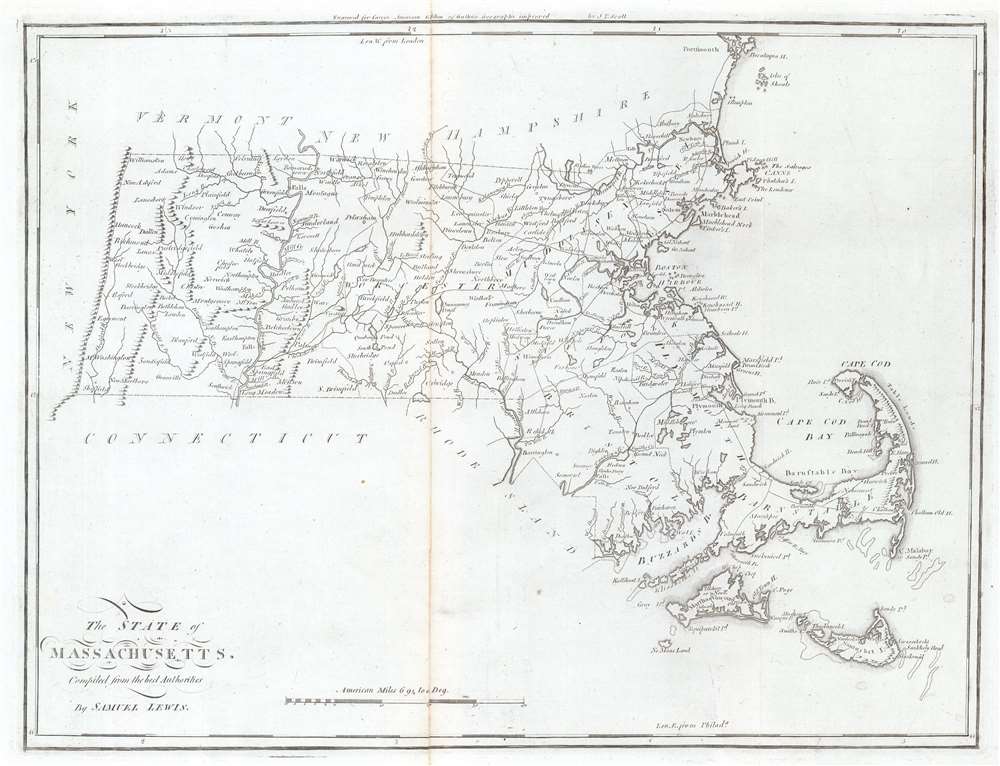 From the first general atlas published in the United States.
$275.00

This is a 1796 Mathew Carey and Samuel Lewis map of Massachusetts, published by Carey in the first general atlas of the United States. Cities, towns, and villages are labeled across the state, including Boston, Salem, Marblehead, and Plymouth. Major roads are depicted, along with rivers and lakes. Coastal bays and harbors, including Boston Harbor, Buzzards Bay, and Cape Cod Bay, are labeled.

This map was engraved by William Barker for Carey's American Edition of Guthrie's Geography improved (the first general atlas published in the United States) in 1796. Well represented institutionally.


Samuel Lewis (c. 1754 - 1822) was an American engraver, cartographer, draftsman, and geographer active in Philadelphia in the first part of the 19th century. Though his place of birth is uncertain, most agree that Lewis emigrated from Dublin, Ireland, in the late 18th century. Lewis' earliest cartography work was produced in partnership with the well-known Philadelphia publishers Matthew Carey and Henry Schenk Tanner. In 1804, with the intention of republishing high quality English maps in the United States, Lewis partnered with the eminent British map publisher Arron Arrowsmith. Their first joint publication was A New and Elegant General Atlas, but many others followed including an American edition of Arrowsmith's important double hemisphere wall map of the world. Arrowsmith also worked with Jedidiah Morse, among other important American cartographers of the period. Ralph Brown considers Lewis to be "the most enterprising commercial map-maker of the period … " Lewis is best known for his map related to the expedition of Meriwether Lewis (no relation) and William Clark. In 1814 Lewis, copying directly from William Clark's manuscript, issued A Map of Lewis and Clark's Tracks across the Western Portion of North America. This important document was the first published map derived from the Lewis and Clark Expedition and profoundly transformed the cartography of the American northwest. Samuel Lewis of Philadelphia should not be confused with Samuel Lewis of London, another cartographer active during roughly the same period. Learn More...