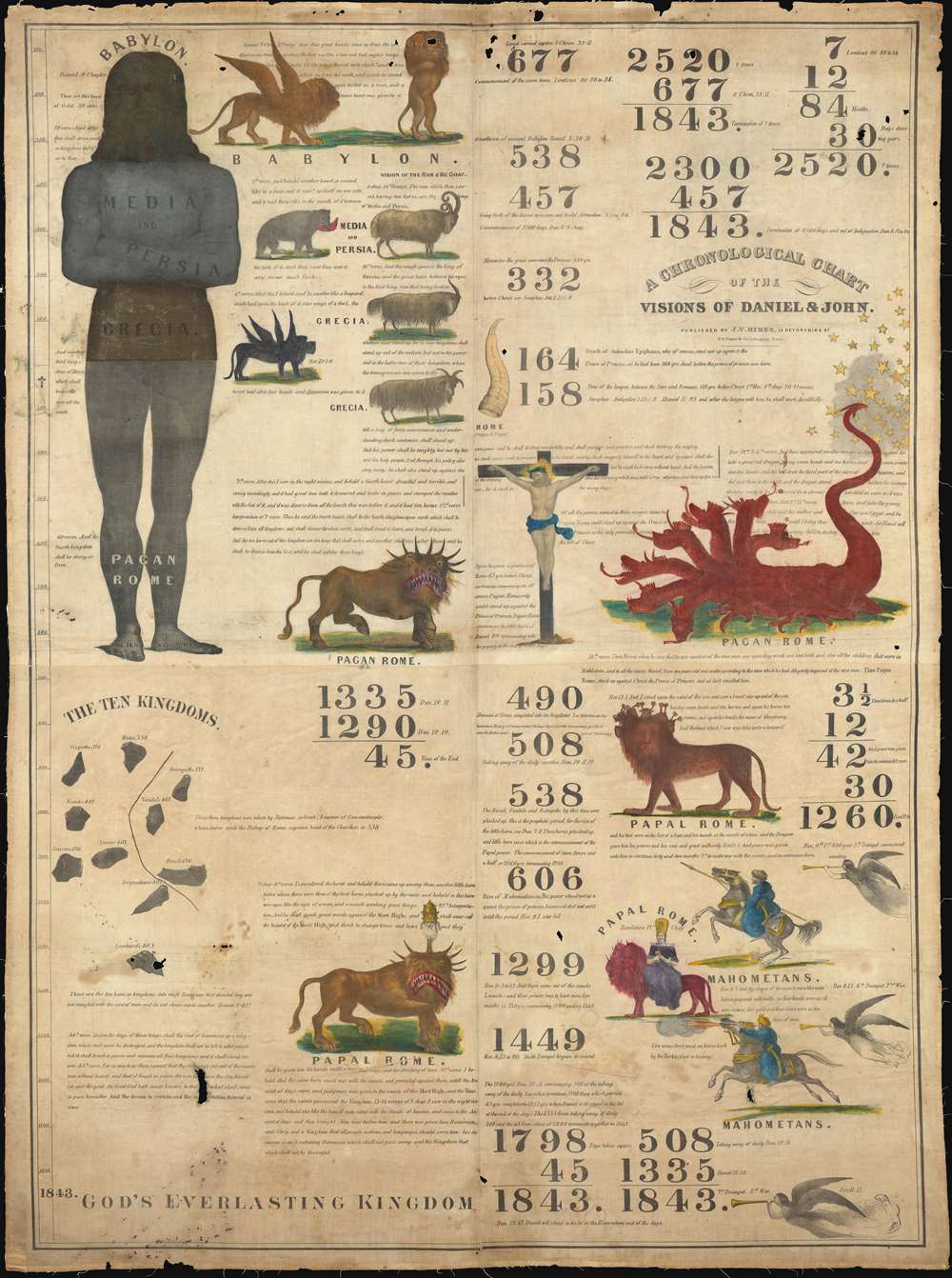 Known as the '1843 Chart', this rare Millerite chronological chart predicts the end-of-days in 1843. Printed on cloth by Benjamin Thayer, this chart is a didactic tool illustrating the predictions of William Miller. The chronology records world history from roughly 700 BC to 1843, when Miller, based upon Biblical calculus and prophetic interpretation, predicted Christ would come again heralding Armageddon. The allegorical 'beasts' of Armageddon are illustrated, among them various goats, a 7 headed dragon, a lion-bull creature, and more. The chart was published by Joshua Vaughan Himes, who served as Miller's publicist and pamphleteer after 1840. he publicaion of htis chart was significant as it was meant both to fulfill prophecy and for use at 'big tent' evangelical gatherings.

William Miller was a prosperous famer from northeastern New York. Miller used the year-day method (in which Biblical days are replaced with real-world years) to interpret the prophecies of Daniel 8:14. Starting with the Persian King Artaxerxes I's 457 BC decree to rebuild Jerusalem, Miller calculated 2300 year/days, determining the date of the apocalypse and the Second Coming as 1843 or 1844. He began to proselytize his ideas as early as 1831 through a series of lectures and pamphlets. During one of these lectures, in 1839, he met Joshua Vaughan Himes.

Himes met Miller during a lecture in Exeter, New Hampshire. He found Miller's apocalyptic message compelling and, from 1840, began acting as Miller's de facto publicist. He organized lecture tours and published posters, like this one, to explain Millerism. Himes also published Signs of the Times, a fortnightly newspaper intended to report on the coming end-day. Signs of the Times reamins an active publicaion of the Seventh Day Adventist Church.

When Jesus didn't show up in 1844, an un-event that came to be known as the 'Great Disappointment,' the popularity of Millerism began to decline. Millerite leaders and followers were left generally bewildered and disillusioned. Some determined that Jesus had 'secretly returned,' others abandoned the Millerite doctrine, still others embraced complex theological ideas that ultimately led to the founding of the Seventh-day Adventist doctrine.

The Prophecy of Habakkuk

The chart is credited in period documentation to Millerite preachers Charles Fitch (1805 - 1844) and Apollos Hale (1807 - 1898). It id believed that they received divine inspiration and that the publication of the '1843 Chart' fulfilled the prophecy of Habakkuk, which read, 'And the LORD answered me, and said, Write the vision, and make it plain upon tables, that he may run that readith it' (Habakkuk 2:2).

Adherents to the Bahá'í Faith generally believe Miller's interpretation of Biblical prophecy to have been correct and fulfilled. Their own prophetic forerunner, the Báb, declared himself the 'Promised One' on May 23, 1844, and began preaching in October 1844. A number of Bahá'í publications reference the Millerites, most notably the William Sears' Thief in the Night. In this work Sears recreates Miller's year-day process, reaffirming 1844 as the date of the Second Coming.

It is unclear exactly when this was printed, but it must postdate 1842, when it was approved by the Boston Millerite General Conference, and predate the 1843-44 Great Disappointment. Andrews University, which owns 3 examples of this chart, ascribe its design to Millerite preachers Charles Fitch and Apollos Hale, but there is no reference to either on the chart itself. It was published by Himes and printed in Boston by Benjamin W. Thayer. The present example is the first edition. It was retooled in 1843 to update the apocalypse to 1844, again in 1850, and again 1853 to adhere to Joseph Cummings' revised end-of-times dating of 1853. In the James White Library, Andrews University, there is evidence of an 1909 issue collected from an Amazon tribesman. Later reduced issues were produced for educational purposes in 1908, the 1970s and 1980s.

This banner is extremely rare. We have been able to identify only three surviving examples at the James White Library at the Adventist Andrews University. The Adventist Digital Library has digitized versions of all 3 examples. The OCLC does cite the chart several times, but further research has revealed these to be facsimiles. Market history is extremely limited. The chart appeared in a trade catalog some 30 years ago for 4,000 USD. No more recent trade history exists.

Joshua Vaughan Himes (May 19, 1805 - July 27, 1895) was a minister, publisher, and leader of the Advent Christian Church active in the middle t late 19th century. Himes was born in Wickford, Rhode Island and apprenticed as a cabinetmaker in New Bedford, Massachusetts. He joined the literalist Christian Connexion Church in 1824 and was ordained as a minister in 1825. Sometime between 1839 and 1840 Himes became involved with the Millerist movement of William Miller, who he met at a lecture in Exeter, New Hampshire. Himes quickly became aa adherent and leveraged his organizational and publishing ability to promote Millers 'End of Days' interpretation of Biblical prophecy. He also began publishing the Signs of the Times, a fortnightly Millerist newspaper. Following the Great Disappointment (when the world did not end as Miller projected in 1843-44), he became a leader of the Adventist Church Learn More...


Benjamin W. Thayer (1814 - December 17, 1875) was a Boson based lithographer, newspaper investor, and real- estate broker active in the middle part of the 19th century. Thayer published as 'B. W. Thayer and Company.' He appears to have had two periods of activity, between 1840 and 1847 and between 1851 and 1853. In 1840 he took over the shop of William S. Pendleton and Moore, which he rand with his brother-in-law, John H. Bufford, and John E. Moody. He abandoned the partnership in 1846, establishing himself at 208 Washington Street as a 'fancy goods seller' and lithographer. He does not appear in the Boston Directory between 1848 and 1850, suggesting he was no longer active. He reestablished his partnership with Bufford in 1851 and appears again in the Directory until 1953, when he sold the shop to S. W. Chandler. He leveraged the assets of the sale to become a wealthy newspaper investor and real estate agent. Learn More...

Good. On linen cloth. Toning throughout. Some old holes.