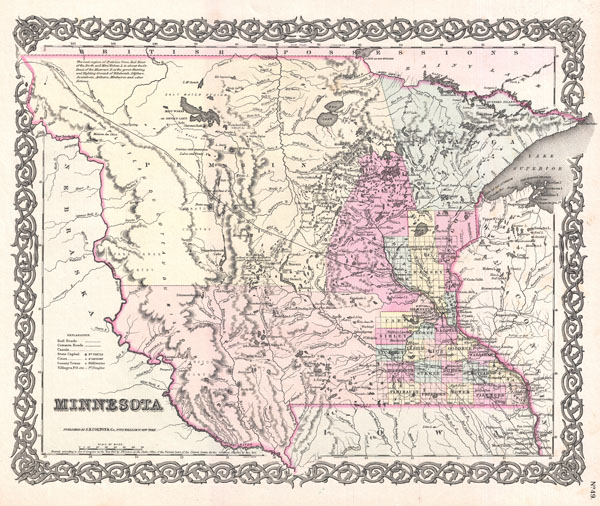 A beautiful 1855 first edition first state example of Colton's map of Minnesota. This is one of the rarest and most desirable of all Colton atlas maps. Like most of Colton's state maps, this map was derived from an earlier wall map of North America produced by Colton and D. Griffing Johnson. Covers territorial Minnesota, which included modern day North and South Dakota. When the map was drawn only a small portion of southeastern Minnesota hand been plated for settlement, the remainder of the territory was dominated by a number of large and powerful American Indian nations. These included the Yanktonnan and Chippewa. Identifies the Chippewa and Long Prairie Indian Agencies. Also offers notes on the salinity of various lakes in the region and the locations of trading posts, such as the Scottsman Martin McLeod's Trading Post on the Minnesota River. This map further identifies various forts, rivers, rapids, fords, and an assortment of additional topographical details. Map is hand colored in pink, green, yellow and blue pastels to define territory and state boundaries. Surrounded by Colton's typical spiral motif border. Dated and copyrighted to J. H. Colton, 1855. Published from Colton's 172 William Street Office in New York City. Issued as page no. 49 in volume 1 of the first edition of George Washington Colton's 1855 Atlas of the World.