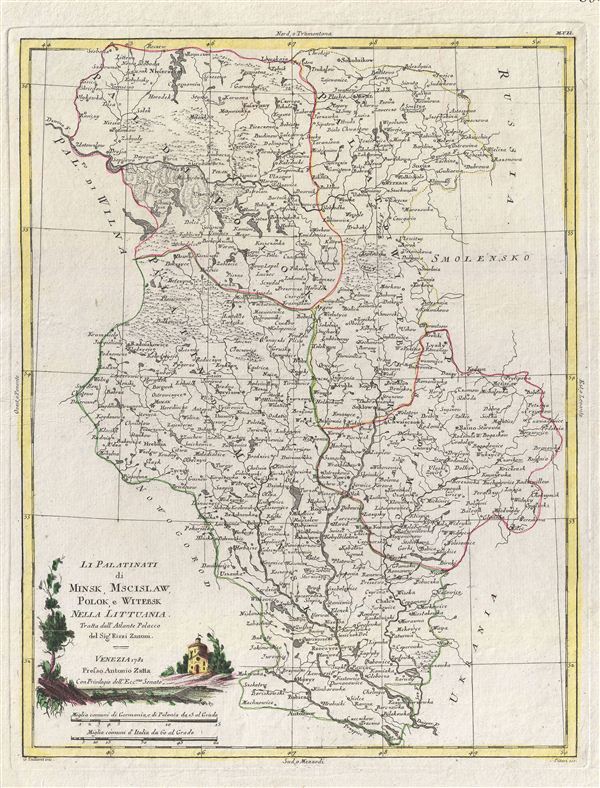 A fine map of the Palatinates of Minsk, Mscislaw, Polok and Witebsk, Poland. This map covers from parts of Poland from Sokolnikow to Plost and from Wilna to the Russian border. Though culturally intact, by 1781 Poland had gone through two partitions. When this map was issued most of the territory depicted here was under Russian suzerainty. A title cartouche depicting a country scene set in the lower left quadrant. This map was drawn by Antonio Zatta for Rizzi Zanoni's 1781 Atlante Polacco.


Giovanni Antonio Bartolomeo Rizzi Zannoni (September 2, 1736 - May 20, 1814) was an 18th century Italian cartographer active in Venice and Naples. Zannoni was born in Padua, Italy on September 2, 1736. Between 1749 and 1751 Zannoni studied Astronomy at the University of Padua under John Polen, a prominent astronomer of the period. After leaving the University, Zannoni was commissioned by the King of Poland, Augustus III, to map that country. Zannoni's subsequent survey is considered the first accurate triangulation of Poland. Afterwards Zannoni's services were in high demand and he traveled around much of Europe, working on various surveys in Denmark, Germany, Prussia, and Sweden. Around 1757 Zannoni was caught up in the hostilities surrounding the Seven Year War and, after one battle, was taken to Paris as a prisoner of war. Paris must have suited Zannoni for he remained there for nearly 20 years, even taking service with the Paris Engineer's Office. It was also here in Paris the Zannoni developed many of the cartographic contacts that would lead to a number of important cartographic publications, including the Atlas Moderne in conjunction with Lattre. In 1781 Zannoni was called to Naples by the Bourbon monarch there to help in the revision of the Charter of 1769. Afterwards he stayed on and produced a numerous important maps of the Kingdom of Naples. Zannoni is considered a careful and precise cartographer and his work, particularly the maps he made in Naples, have been praised by R.V. Tooley as 'remarkable for a marvelously minute attention to detail, and amply deserves the commendation passed upon it by Sir George Fordham' (Tooley, Maps and Mapmakers, 21). Zannoni would spend the remainder of his days in Naples and passed away on May 20, 1814. Learn More...