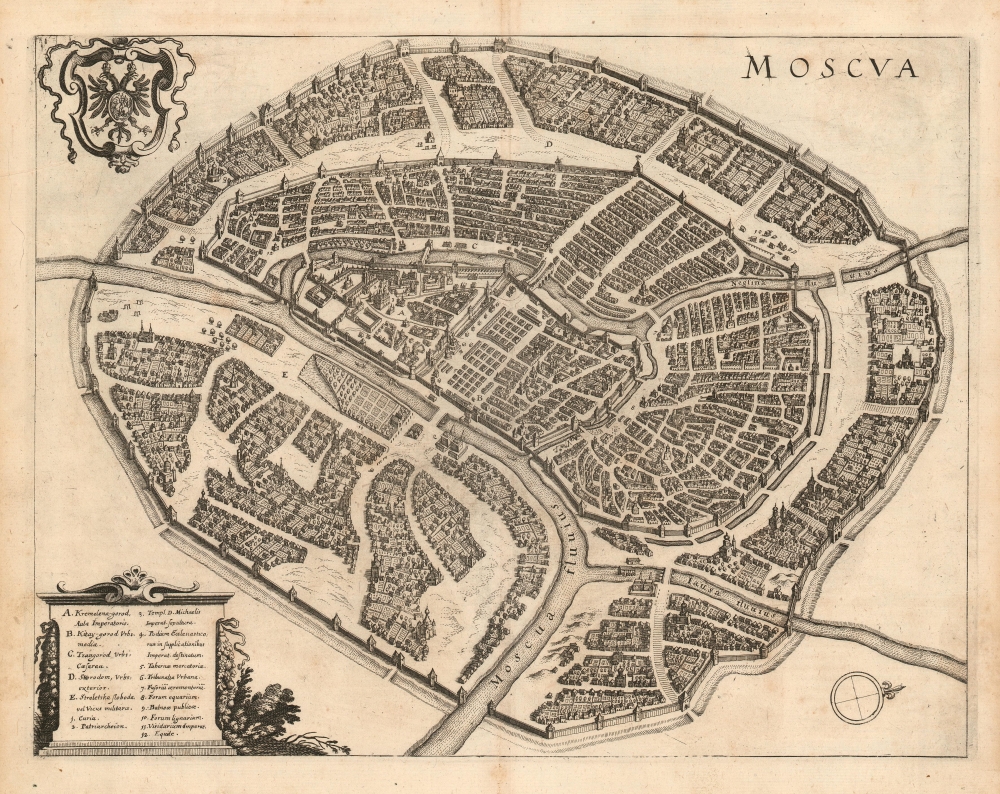 One of the earliest full-sheet examples of this pre-Смутное время plan of Moscow.
$2,500.00

This is a scarce 1638 Matthais Merian city plan or map of Moscow. Though an intermediary source may have been Hessel Gerritz, the map is believed to have been ultimately derived from a Russian survey prepared at the orders of the Czar of Muscovy, Boris Godunov. Iterations of this plan first appear in the final, 1617, edition of the Braun and Hogenberg city book. A reduced version was included as an inset in Hessel Gerritz's Tabula Russiae, the plate for which would later be purchased by Blaeu for inclusion in his atlas. Apart from the Braun and Hogenberg, this appears to be the earliest full-sheet edition of the plan, which pre-dates by more than twenty years the version included by Joan Blaeu in his Atlas Maior. Although this map's information dates to the end of the 16th century, the onset of the Time of Troubles following the death of Boris Godunov would curtail much reliable contact with this part of the world, and so well into the 17th century this plan would remain the most up-to-date mapping of Moscow available. An inset of this plan would even adorn the 1676 map engraved by Francis Lamb for inclusion in the last editions of the Speed atlas.

The plan is oriented to the west-north-west and shows the concentric city walls of the Kremlin, Kitai Gorod and the old city at the junction of the Moscow and Neglinnaya rivers. A legend with a letter-and-number key labels city features. In addition the map also notes the Kremlin and Kitai Gorod, the Streltsy encampment, churches, courts and other public buildings.

This map was executed in 1638 for inclusion in Matthias Merian's Neuwe Archontologia cosmica, a German translation of Pierre d'Avity's 1616 Les Estats, empires, et principautez du monde. We identify about ten examples of later editions of Merian's Neuwe Archontologia cosmica in institutional collections, and twelve examples of this separate map are so cataloged, in various editions.


Georg Braun (1541 – March 10, 1622) was a German deacon, viewmaker, and typo-geographer based in Cologne. Along with Franz Hogenberg (1535 - 1590), Braun is best known for his publication of the highly influential city atlas Civitates Orbis Terrarum. The six volume work, with some 546 views, was published between 1572 and 1617 and intended a companion to Abraham Ortelius' Thatrum Orbis Terrarum - thus certain obvious stylistic similarities. In compiling the Civitates Braun took on the role of editor while most of the engraving work was completed by Franz Hogenberg. Braun died, as he was born, in Cologne. Learn More...