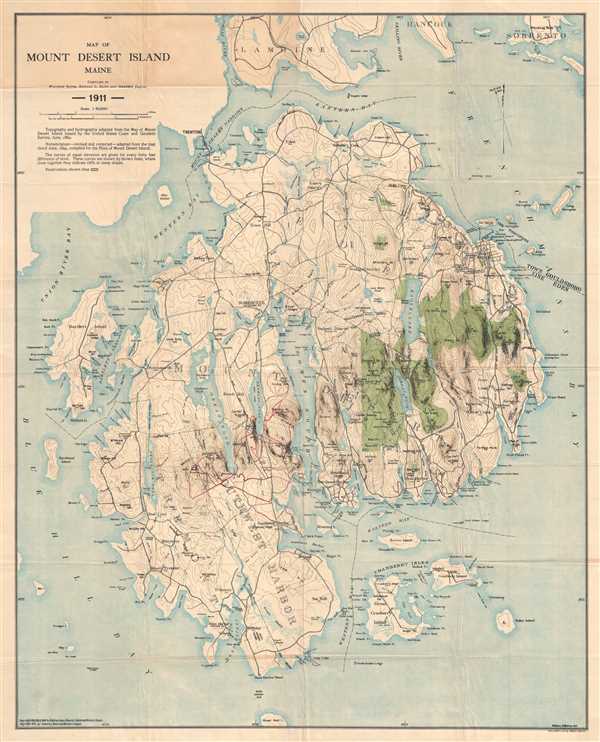 The last edition of a landmark map in the cartography of Mount Desert Island.

This is a 1911 map of Mount Desert Island, Maine compiled by Waldron Bates, Edward L. Rand, and Herbert Jaques. The map depicts the island from Blue Hill Bay to Frenchman's Bay and from Lamoine, Hancock, and Sorrento to Great Gott Island. Highly detailed, locations throughout the island are labeled, including the towns of Bar Harbor (labeled here as Eden), Mount Desert, Southwest Harbor, and Tremont. Villages throughout each of these towns are also labeled, including Salisbury Cove, Somesville, West Tremont, and Seal Harbor. The topography, illustrating elevation changes in forty-foot intervals, was adapted from the Map of Mount Desert Island issued by the United States Coast and Geodetic Survey in 1882, as was the hydrography.

The boundaries of nascent Acadia National Park are illustrated on the map as well, though the park remains unlabeled. Acadia was initially established as Sieur de Monts National Monument by President Woodrow Wilson in July 1916. In February 1919, the area's status was officially changed from a National Monument to a National Park, making it the first National Park east of the Mississippi River. With the change to a National Park came a name change as well, with the region now being known as Lafayette National Park. It would not be until January 1929 that the park would be renamed Acadia National Park. Acadia is unlike most other National Parks as its creation was encouraged by numerous private individuals. One of these was John. D. Rockefeller, Jr. Rockefeller purchased a summer home in Bass Harbor in 1910, the year before this map's publication. He began buying land in the park with the goal of creating a system of carriage roads as means of making more accessible to visitors what Rockefeller though was 'one of the greatest views in the world.' Although it is impossible that the paths indicated here are the carriage roads, the carriage roads as they exist today closely resemble the trails illustrated here. The trails as they are shown here most likely correlate to those created by Waldron Bates, one of the individuals responsible for this map. Although this map predates the formal creation of the park, the creation of the park was under consideration at the time of this map's publication.

This map was compiled by Waldron Bates, Edward L. Rand, and Herbert Jaques and published by the Walker Lithography and Publishing Company in 1911.

Waldron Bates (November 24, 1856 - February 9, 1909) was an American lawyer, author, cartographer, and avid outdoorsman. Born in Boston, Massachusetts, Bates attended Harvard and graduated in 1879. He then attended Boston University, from which he received a law degree in 1882. In 1892, Bates joined the Bar Harbor Village Improvement Association, and was named its Path Committee Chairman in 1900, a position he held until his death in 1909, and served as the Association's president from 1904-05. Bates, Edward Rand, and Herbert Jaques published the 'Map of Mount Desert Island' and the 'Path Map of the Eastern Part of Mount Desert Island' in 1896. He was well known around Bar Harbor and Mount Desert Island as a pathmaker. He would plan and build trails leading to geologically interesting rock formations and related sites, and also instituted a uniform method of signage for these trails. On February 9, 1909, Bates tragically passed away when he tried to board a train leaving the railroad station in Monroe, Virginia. According to newspaper accounts, Bates was trying to board a Pullman car, when he lost his footing, slipped, and fell under the departing train. He never married.


Edward Lothrop Rand (August 22, 1859 - October 9, 1924) was an American botanist, lawyer, and cartographer. Born in Dedham, Massachusetts, Rand was born Edward Sprague Rand IV but later changed his name to Edward Lothrop Rand on July 2, 1878, following a scandal involving his father over-mortgaging the family home, evading arrest, and fleeing to Brazil. He attended Harvard University and graduated in 1881 and graduated from Harvard Law School in 1884 and went on to practice law in Boston, but his true passion in life was botany. Rand was famous on Mount Desert Island as one of the members of the Champlain Society and as the first Chairman of the Path Committee on Mount Desert Island. He co-author Flora of Mount Desert Island, Maine with J.H. Redfield and created map of Mount Desert Island with Waldron Bates and Herbert Jaques. Rand married Annie Matilda Crozier on June 29, 1893 in Boston.


Herbert Jaques (January 23, 1857 - December 21, 1916) was an American draftsman and cartographer. Born in Framingham, Massachusetts, Jaques studied at MIT. After graduating, he found a job as a draftsman in the offices of Henry Hobson Richardson. Jaques joined forces with another draftsman employed by Richardson, Robert Day Andrews, to create the firm Andrews and Jaques. In 1889, Augustus Neal Rantoul joined the firm, which was renamed Andrews, Jaques, and Rantoul. Andrews, Jaques, and Rantoul designed private residences, but their best known work are public and commercial buildings they designed for clients throughout the United States. Jaques married Harriet Sayles Francis on April 26, 1883.

Very good. Even overall toning, except on top left, where it is heavier. Wear along original fold lines. Verso repairs to fold separations and at fold intersections. Blank on verso.