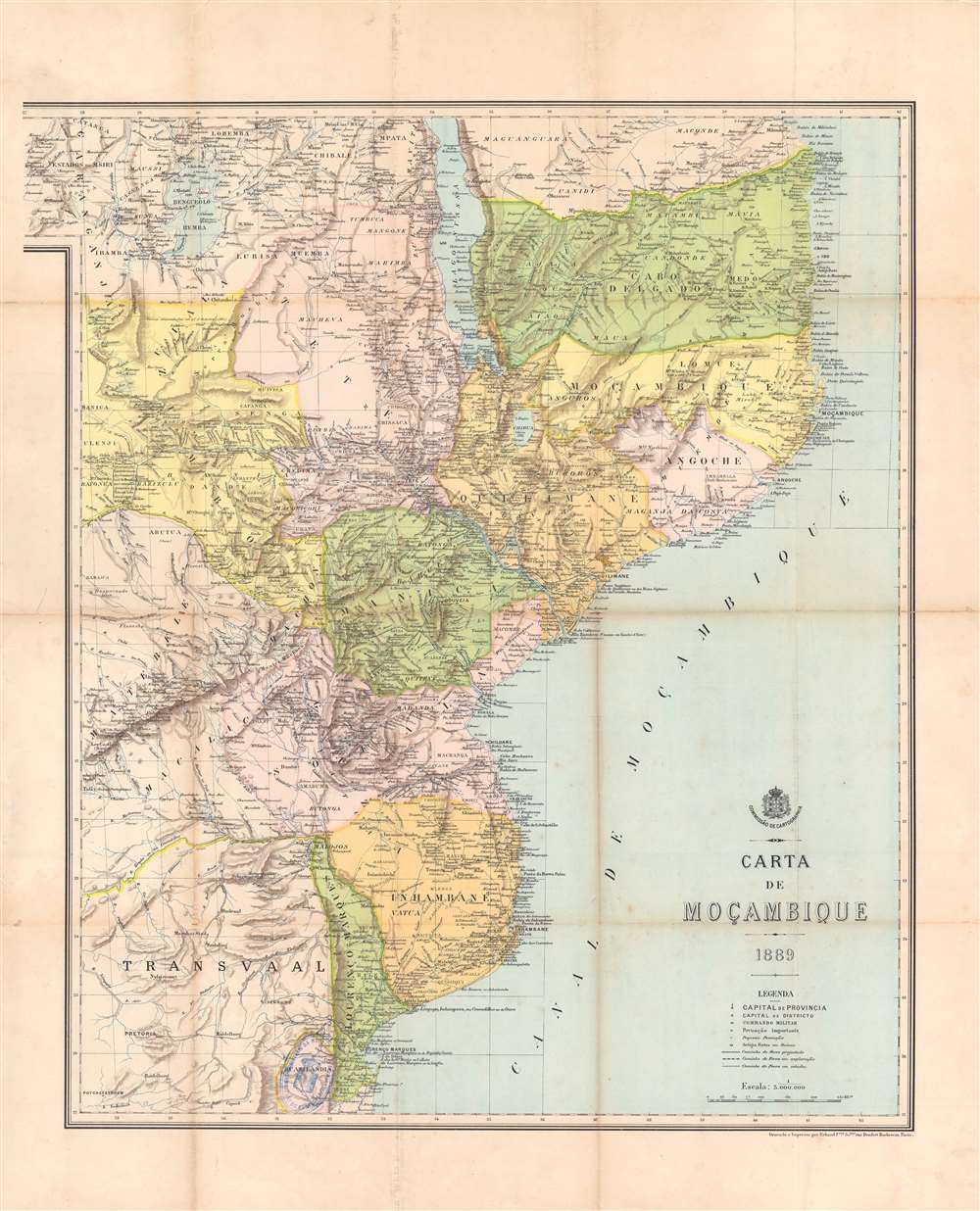 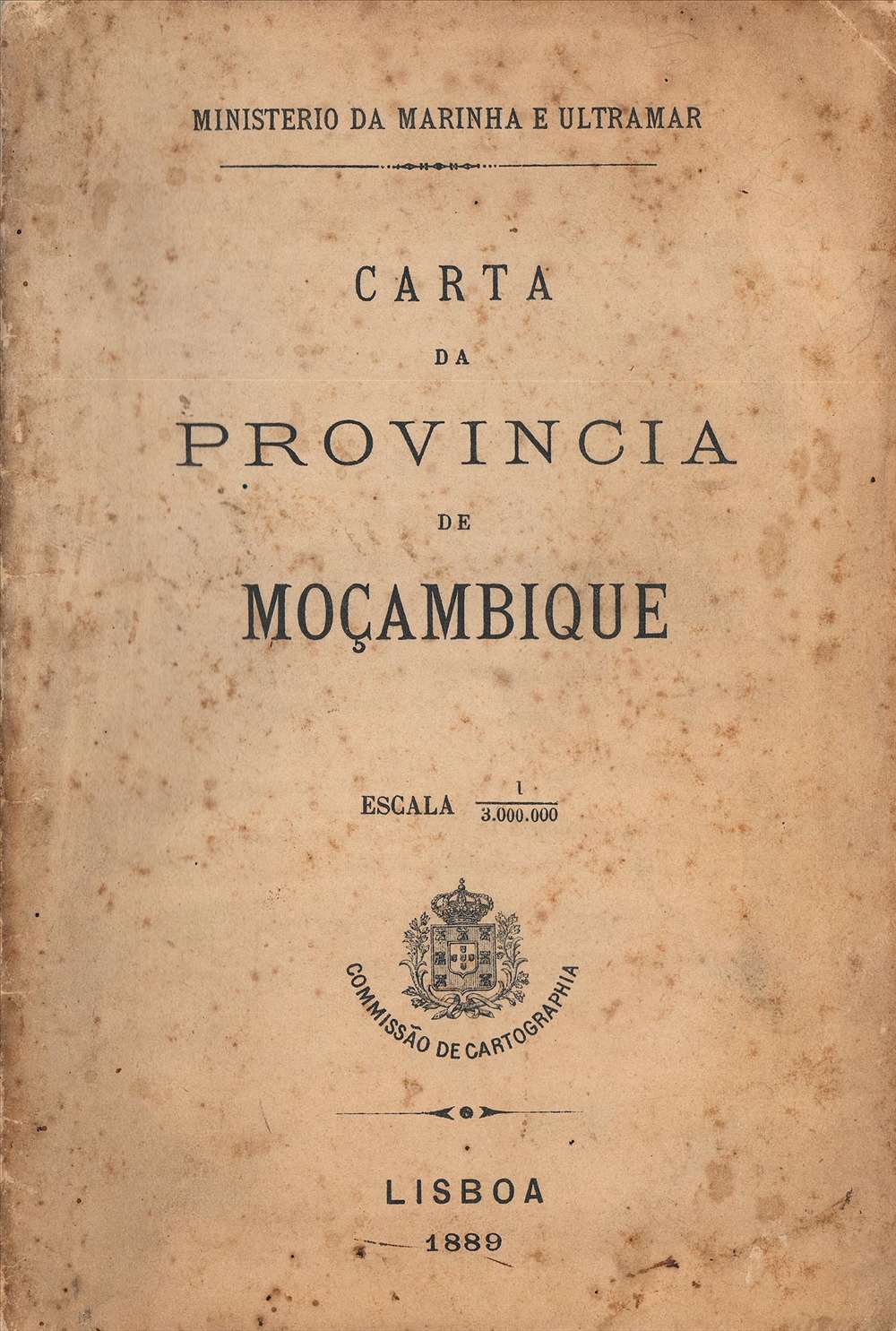 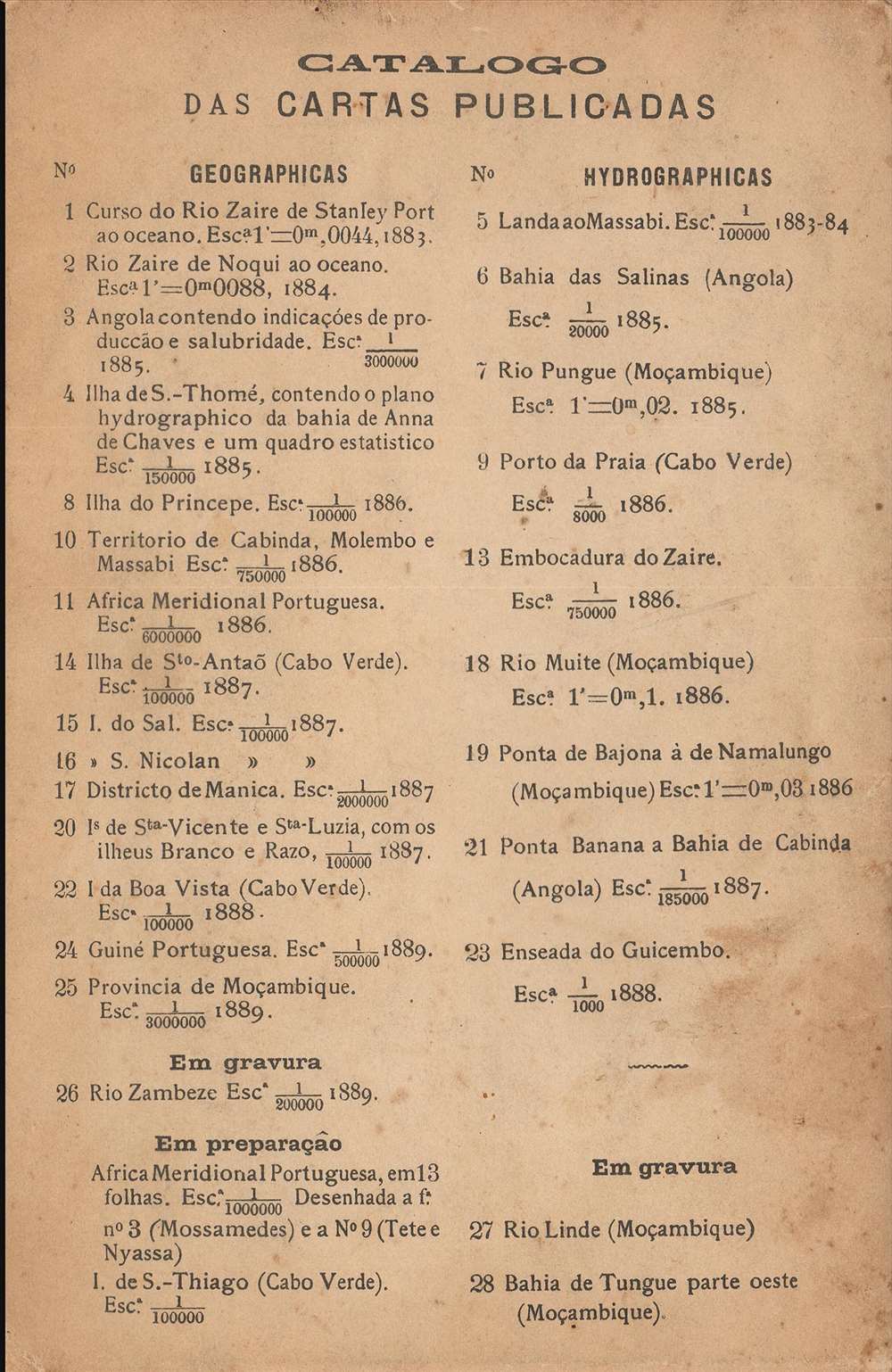 This is an 1889 map of Mozambique (Portuguese East Africa) made by the Comissão de Cartographia and printed in Paris by Georges Erhard. It was produced at the height of a Portuguese-British competition in central and eastern Africa, part of the 'Scramble for Africa' among European powers. The map reflects territorial claims extending far past areas of Portugal's actual control, a failed attempt to claim sovereign based on the doctrine of 'effective occupation' laid out at the Berlin Conference of 1884 - 1885.

This map is a rather fanciful depiction of the territory of Portuguese East Africa, with borders extending well beyond areas of Portuguese rule. At this time, Portugal was striving to build a land corridor between Mozambique and Angola (discussed below) and the territories here marked as Tete, Zumbo, the northern portion of Quilimane (Quelimane), and the western portion of Sofala, were critical for that project. The map gives a sense of the difficult mountainous terrain, limited infrastructure, and array of local groups (in caps), often in competition with each other, that confronted the Portuguese in trying to substantiate these claims.

At the time this map was made, the British and Portuguese were tussling for influence in this region. In the areas included in the top portion of this map, British missionaries had arrived in the 1860s and other British interests expanded in their wake, including the African Lakes Corporation and a town at Blantyre (center, towards center-top), where a British Consul was stationed in 1883. Still, British settlers there were considered beyond the protection of their government. Further to the south, along the left-hand side of this map, British mining interests led by Cecil Rhodes and his British South Africa Company signed agreements with local chiefs, obtaining mining rights and establishing protectorates over their lands.

Meanwhile, since the 1830s, the Portuguese had attempted to expand their control over Mozambique, which was only nominal inland from the coast, by offering large estates (prazo) to colonists in the Lower Shire River Valley (the area around Blantyre and Lake Chilwa, here as Lake Chirua). They also sought to shore up ties with local rulers who were their supposed vassals, or in other cases sponsored rival factions to gain the upper hand in various localities.

In the late 1870s and 1880s, the Portuguese tried to establish an East-West corridor across central Africa, a plan laid out in the famous 1885 Mapa cor-de-rosa (Pink Map). This project was motivated by the doctrine of effective occupation agreed to at the Berlin Conference of 1884 – 1885, where the Portuguese also gained the support of other European powers for their plan, except for Britain, whose subjects were expanding into these same areas and who imagined a string of colonies running north and south 'from the Cape to Cairo' that would intersect with Portugal's claims.

In the wake of the Berlin Conference, Portuguese troops under Alexandre de Serpa Pinto attempted several times to make inroads with local chiefs in the Shire Highlands around Blantyre and establish a protectorate. In September 1889, Serpa Pinto crossed the Ruo River at Chiromo (here as Chilomo) with a military expedition. At that point, the British Consul had left Blantyre but had set up a missionary named John Buchanan to act as consul in his absence. Without conferring with the Foreign Office, Buchanan declared a Shire Highland Protectorate to fend off the Portuguese advances. The situation came to a head when Serpa Pinto's troops fought with troops of Kokolo chiefs aligned with the British and the Portuguese moved as far north as Katunga (here as Catunga).

In January 1890, the British sent an ultimatum that the Portuguese relinquish their claims laid out on the Pink Map and sign a treaty fixing the borders on terms favorable to the British. The much weaker Portuguese were forced to accept Britain's will and watch helplessly as British interests expanded into the lands they had recently claimed. The subsequent Anglo-Portuguese Treaty of 1891 confirmed British primacy in the region and established territorial divisions that still predominate in central and eastern Africa. The incident was an embarrassment for the young King Carlos I and for the entire nation, and was used as an opportunity by republican revolutionaries to stage a (failed) revolt in Porto. The monarchy's reputation never recovered from the episode; Carlos was assassinated along with his designated heir in 1908 and the monarchy was overthrown and abolished in 1910.

In the early 19th century, Portugal was no longer a great world power, and its empire was significantly reduced, especially after the independence of Brazil in 1822. But the empire did still maintain a string of colonies, the largest of which were Angola and Mozambique. Some Portuguese had ventured into the African interior in the early days of their colonial presence and set up estates and trading post-garrisons, including at Sena and Tete. Portuguese traders even ventured further inland, mostly along the banks of the Zambezi, into what is now Zambia and Zimbabwe, competing with established Swahili traders and seeking out gold, ivory, and slaves. However, settlers were few in number and generally intermarried with the local population to the point that they lost Portuguese identity, while the estates were operated like independent fiefdoms rather than a shared colonial enterprise. The Portuguese inclination to try to force Christianity on their trading partners and use the presence of Muslim traders as an excuse for military campaigns also provoked opposition. Therefore, Portugal's control was mostly limited to coastal ports and most of the people it claimed to rule were effectively independent. This is evidenced by the indication of 'Portuguese ruins' and 'ancient forts' in the southwestern portion of this map (currently eastern Zimbabwe).

In the early-mid 19th century, the government launched a renewed effort to move colonists further inland and strengthen direct control over the interior. The 'Scramble for Africa' at the end of the centurey presented Portugal both risks and opportunities. But, as discussed above, they were incapable of challenging the British and had to grudgingly accept a secondary role among European colonial powers there. Despite their earlier antagonism, the British and Portuguese were both wary of German expansion in Africa in the late 19th century and collaborated against Germany during the First World War. Although Portugal was neutral at the start of the conflict, it supplied the British and French armies on the Western Front and was eventually drawn into the war on the Allied side in 1916, focusing mainly on protecting its African colonies.

In the interwar period, with the threat of anti-colonial movements looming, Portugal moved towards a notion of 'pluricontinental' nationhood. Nevertheless, with the wave of decolonization that followed World War II, Portugal faced the prospect of losing its colonies, but the country's Prime Minister and de facto dictator, António de Oliveira Salazar, categorically refused decolonization and aimed to crush guerilla movements in Angola, Mozambique, and Portuguese Guinea (now Guinea-Bissau). Counter-insurgency efforts were largely successful as a short-term solution, but failed to resolve underlying problems, and when Salazar's successor Marcelo Caetano was toppled in a coup in 1974, Portugal's empire quickly collapsed. Angola and Mozambique then descended into protracted civil wars that became Cold War proxy conflicts that were only resolved years later.

This map was published in 1889 by the Comissão de Cartografia das Colónias, an office within the Ministério da Marinha e Ultramar, and was engraved and printed by Georges Erhard in Paris. It is held by a handful of libraries in Europe and North America and is scarce to the market.