1654 Nicolas Sanson Map of the Mughal Empire and its Neighbors 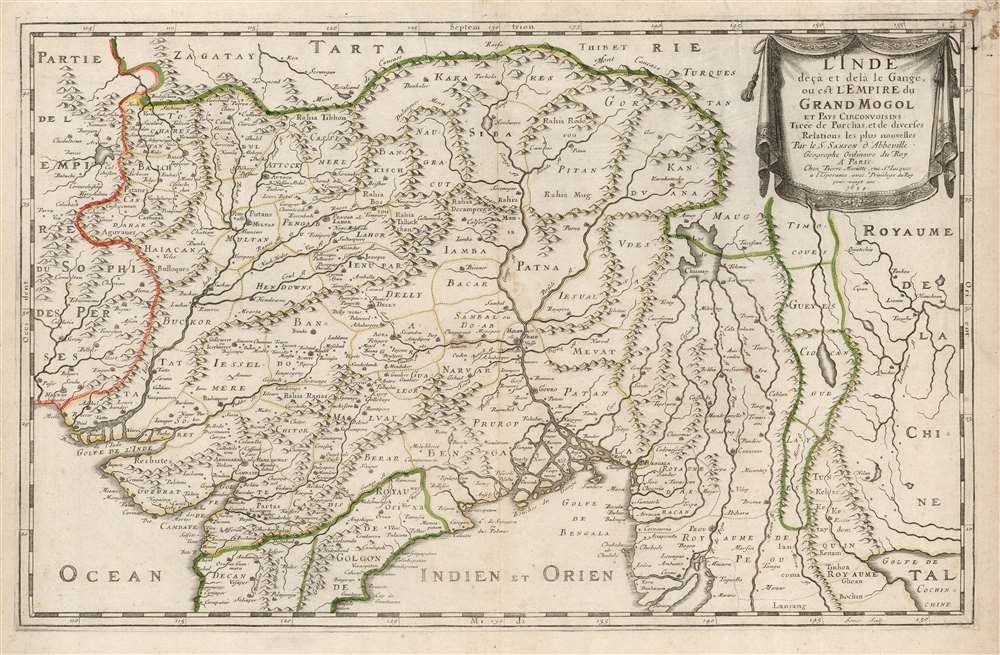 1654 Nicolas Sanson Map of the Mughal Empire and its Neighbors

This is an attractive example of Nicolas Sanson's 1654 map of the Mughal Empire of Northern India. It is a significant illustration of the early Silk Route trade networks between India and Kabul. The map thus embraces the northern parts of modern India, Pakistan, Afghanistan, Bangladesh, and Burma, as well as parts of Thailand, Laos, and Vietnam.

Its core is derived from the unacquirable 1619 Baffin / Roe map. (Probably via the 1625 printed version appearing in Purchas his Pilgrimes. Sanson credits Purchas in the cartouche.) As such, the map features an early, accurate mapping of the Indus River, as well as western and central India. At its heart, the map reveals the vital trade routes between the chief cities of Gujarat, Agra, and Jaisalmer, and their linkage to the Silk Road center of Kabul. While the map does not depict roads, it does illustrate the network of towns, waystations, and caravanserai built to support the bustling trade system. In particular, it reveals the administrative route linking the Imperial palaces at Agra and Lahore.

The lion's share of this map - and virtually every seventeenth century map of northern India - is based on William Baffin's Indostan, the first English map of India, made based on the travels and geographical information of Sir Thomas Roe, the British East India Company's ambassador to the Mughal Empire. Roe and Baffin are thought to have worked on their map during Roe's 1619 return to England aboard the ship Anne Royal, following Roe's tenure as ambassador. Baffin, formerly an arctic explorer, was employed as a surveyor by the East India Company and served as a Master's Mate on Anne Royal. Roe was tasked to produce a map of the Empire in India, compiling geographical data on thirty-seven cities. Baffin added these to the map with difficulty, as he needed to reconcile Roe's data with his own charts and others that remained authoritative. Their 1619 manuscript survives in a single copy in the British Library and the map was published that year, itself surviving in only a single example, also at the British Library. Despite its present prohibitive rarity, the map's influence was monumental.

West of the Indus

Sanson's map includes details north of Kandahar and west of Kabul that do not appear on the Baffin, or its more common derivatives such as the Jansson. Neither does Sanson's treatment of this area resemble Jansson's treatment on his map of the Persian Empire. Sanson's source for this region is obscure.

Prominent at the eastern limit of the map is the Lake of Chiamay, the apocryphal source of four important Southeast Asian river systems including the Irrawaddy, the Dharla, the Chao Phraya, and the Brahmaputra. This lake (also called Chiam-may or Chian-may) began to appear in maps of this region as early as the 16th century and persisted well into the mid-18th century. Its origins are unknown but may originate in a lost 16th century geography prepared by the Portuguese scholar Jao de Barros. It was speculated to be the source of five important Southeast Asian River systems and was mentioned in the journals of Sven Hedin. There are even records that the King of Siam led an army to seize of the lake in the 16th century.

Just as Sanson's map reaches further west than its English or Dutch sources, it extends further east as well. The Kingdom of Pegu (now Burma) and the northern part of Vietnam (Tunquin) appear, as does part of the Gulf of Tonkin (Golfe de Cochinchine, here.) But north of this, the regions of Timocoues, Gueyes, Ciocangue, and Layes (Laos) appear at the headwaters of the Mekong River. Blaeu's map of Southeast Asia obscures this region with a cartouche. The detail of Martino Martini's China does not reach so far west, and we are not aware of an earlier map to name these areas. Certainly, Richard Blome in his 1667 General Mapp of the East Indies would batten on to Sanson's detail here, as he did with the rest of his maps. But just as with the western regions in this map, Sanson's source map for Laos and points north is obscure to us.

This map was engraved by Jan Somer for inclusion in Sanson's atlases, published in partnership with Pierre Mariette. Thirteen examples are listed in institutional collections. The map appears on the market from time to time.


William Baffin (c. 1584 – January 23, 1622) was an English navigator, explorer and cartographer. His efforts to discover a Northwest Passage would earn his fame, largely resulting from his discovery of the bay that bears his name. He is also known for having produced excellent surveys of the Red Sea and the Persian Gulf on behalf of the East India Company, and his collaboration on the most influential map of Northern India to be produced in the seventeenth century. Nothing is known of his early life. Samuel Purchas hailed Baffin as a 'learned-unlearned Mariner and Mathematician... wanting art of words,' conjuring a working sailor whose grasp of survey and drafting came of long experience and not education. He first appears in the historical record in 1612 as chief pilot on Captain James Hall's fourth expedition to Greenland; in the following two years he would serve as in the Muscovy Company whaling fleet around Spitzbergen. In 1615 he was hired by the Company of Merchants of London, Discoverers of the North-West Passage' and sailed as pilot under Captain Robert Bylot, who explored Hudson Strait in search of a Northwest Passage. Baffin's surveys were found to be accurate, confirmed by the explorer Parry in 1821. Returning to the Hudson Strait in 1616 he passed west of Greenland up the Davis Strait, discovering the large bay now known as Baffin's Bay and reaching the furthest point in North America explored by a European until the voyage of Inglefield in 1852. Following his efforts to find a Northwest Passage, he served the East India Company as master's mate aboard the ship Anne Royal. His travels to India between 1617 and 1619 would result in his vaunted surveys of the Red Sea and the Persian Gulf, and his superb map of the Mughal Empire produced in collaboration with Ambassador Sir Thomas Roe. In 1620, he sailed east again, taking part in a naval battle with a combined Portuguese and Dutch fleet which would see his captain killed. Baffin was shot and killed in 1622, as part of a joint effort with Persia to take Portuguese fortresses on Qeshm and Hormuz. Learn More...