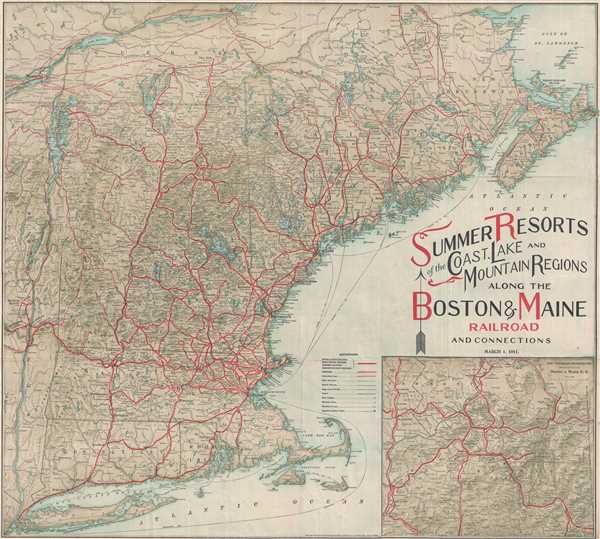 This is a wonderfully decorative 1911 Matthews-Northrup map of New England. The map depicts the region from New York City northwards along the Atlantic coast as far as New Brunswick and the Gulf of Saint Lawrence and from the Hudson River Valley to the Atlantic Seaboard. The network of the Boston and Maine Railroad is highlighted in red, allowing for an instant understanding of the railroad's extensive reach throughout New England and Canada. Myriad cities and towns are labeled along all of the routes. Numerous lakes, ponds, mountains, and other locations are also labeled. An inset map on the lower right highlights the 'American Switzerland,' or the White Mountains of New Hampshire. Elevation and topography is indicated via shading. This map was issued by the Matthews-Northrup Company for the Boston and Maine Railroad.

Very good. Backed on archival tissue for stability. Narrow margins all around. Blank on verso.
Looking for a high-resolution scan of this?