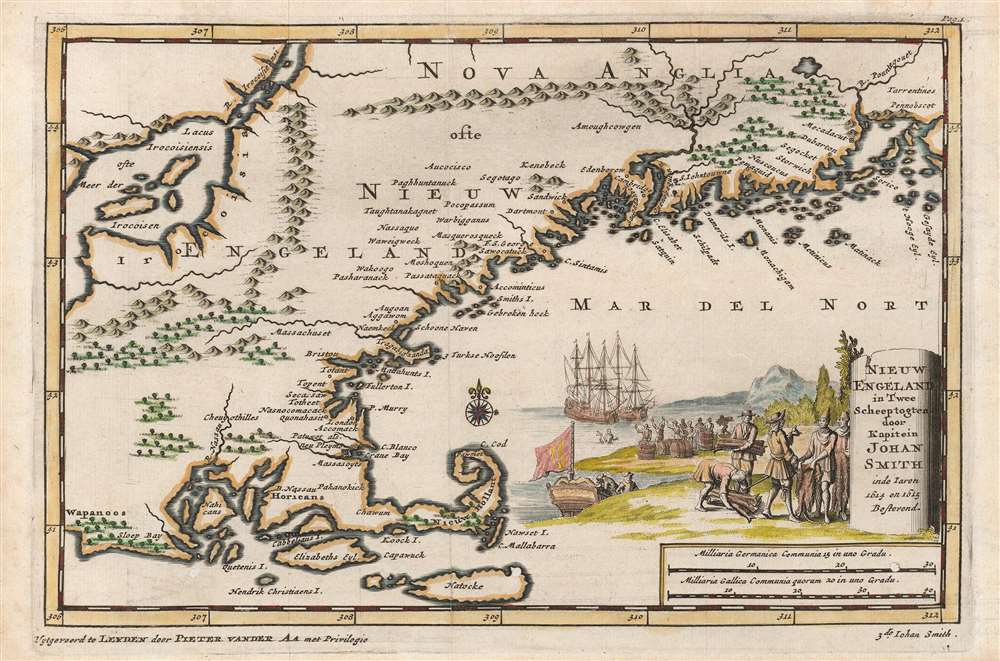 This is an attractive example of Pieter Van der Aa's 1707 map of New England, issued to illustrate the discoveries Captain John Smith in his 1614 and 1615 voyages. The map covers from the coast of Rhode Island to Penobscot Bay in Maine, showing Cape Cod, Elizabeth Island, and Nantucket.

The cartographer Van der Aa bases the cartography upon the contemporaneous Dutch model. The geographic detail and placenames, though compressed on a north-south axis, are derived from the 1651 Jansson 'Prototype Map,' the basis of nearly every map of the Northeast produced in the second half of the 17th century. This geography includes the massive Lacus Irocoisiensis (Lake of the Iroquois), an exaggerated Lake Champlain that the maps of this period placed far to the east of its actual location. Not only the geographic detail, but the placenames are also drawn from the Jansson lineage, rather than the 1616 John Smith map engraved by De Bry (which the present map does not at all resemble.)

The map, appropriately, is engraved in the Dutch tradition, with forests and mountains shown pictorially. An elegant compass rose is placed near Cape Cod. The superb cartouche shows Europeans trading for furs and skins with Native Americans; in the background, a group of Europeans stand with barrels of goods, waving to the finely-rendered ships offshore - or possibly, to the mermaid in the water beside them.

Van der Aa prepared this map for inclusion in volume 16 of his Naaukeurige Versameling, published in 1707. We are aware of four separate examples of this map cataloged in institutional collections: the Universitatsbibliothek Erlangen-Nürnberg, the Osher library, the American Antiquarian Society Library, and the Bert Twaalfhoven Collection at Fordham University. Van der Aa's Naaukeurige Versameling is well represented in OCLC.


Captain John Smith (1580 - 1631) was an English soldier, explorer, colonial governor, Admiral of New England, author, and self-promoter. He was pivotal in the establishment of the first permanent English settlement in America (Jamestown, Virginia) and was the first Englishman to map the Chesapeake Bay, and the coast of New England. His maps of these areas, especially his mapping of the Chesapeake, were broadly influential: there are few maps of Virginia that were produced in the 17th century that do not derive from his work. His books describing the Virginia Colony were themselves important in encouraging further settlement.

A difficulty with Smith's biography is that so much of it relies entirely on his own report: and Smith does not at all appear to have been a modest man. Learn More...