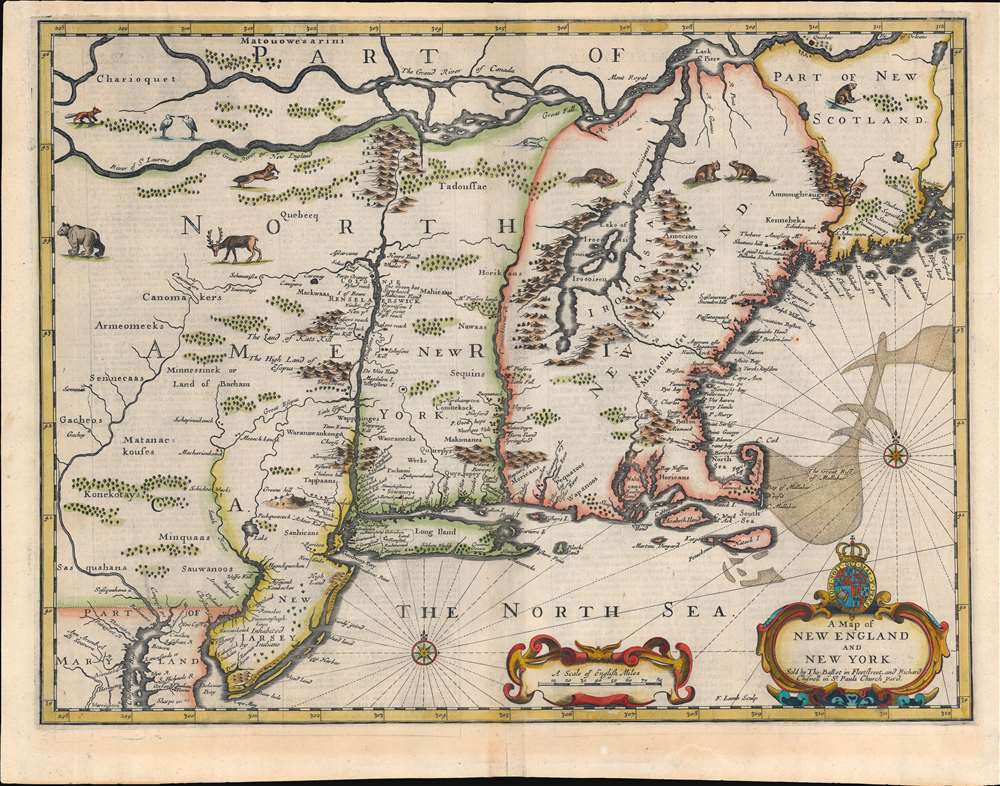 This is beautiful example of the 1676 map of New England engraved by Francis Lamb, to be added to the final edition of John Speed's Prospect of the Most Famous Parts of the World. This was among the maps Bassett and Chiswell commissioned Lamb to produce in order to bring Speed's atlas up to date. The map is a derivative of Jan Jansson's 1651 'prototype', but alters the Dutch topography with English place names. It is notable for a wealth of 'firsts'. This is the first obtainable English map to show the American Northeast's change of hands from Dutch to Britain suzerainty. As such, it emphasizes the potential wealth of the recent British conquest. It is one of the first printed maps to refer to both Manhattan and surrounding region as 'New York.' It is also among the first maps to correctly place Boston.

Like its Dutch precursor, this map covers from the coast of Maine in the vicinity of Penobscot to the Delaware and Chesapeake Bays. Lamb's map focuses more specifically on New York and New England than the antecedent Jansson, perhaps because the new maps in the Prospect already included a detailed map of Virginia and Maryland.

This map is the only English map from the primarily Dutch Jansson-Visscher Series, and while it shares many of the other qualities of the series - absence of Lake Ontario, weak illustration of the St. Lawrence, Lake Champlain offset to the east, and Cape Cod level with Manhattan - it significantly marks a shift in the political landscape from Dutch to British hegemony following the 1665 English conquest of New York City. The text throughout has been updated and Anglicized. Terms like 'Nieu Nederlandt,' 'Novi Belgii,' and 'Nieu Amsterdam' have been replaced with 'New York' and 'New Amsterdam.' Boston, which is often omitted from the Dutch series, has here been introduced. Other newly introduced British toponymy, such as New Iarsey (after the Isle of Jersey), have also been integrated. Dutch terminology throughout has furthermore been translated into English, with, for example, 'Iland' replacing 'Eyland' and 'South Sea' replacing 'Zuyder Zee.'

The First 'Speed' Maps Engraved by an Englishmen

Although commonly referred to as the 'Speed Map of New England' for its publication in John Speed's Prospect of the Most Famous Parts of the World, this map has not real relation to Speed, that figure having been been dead for some 47 years before it was engraved. After Speed's death, his map plates fell into the hands of Thomas Bassett and Richard Chiswell. Bassett and Chiswell employed Francis Lamb engrave seven additional maps, three dealing with North America, to expand the Speedian Prospect. This is one of those three. Since the maps produced for the Prospect during Speed's lifetime were uniformly engraved by Dutch artists - principally Goos and Hondius - Lamb's maps represent the only 'John Speed' maps engraved by an Englishman.

The map is richly embellished in the Dutch style with various 'American' fauna frolicking through the hinterlands. These include a deer or elk, a catamount, several beavers (important given the primacy of the regional fur trade in the mid-17th century), cranes, and foxes. Topography is presented in profile and often speculative. Two elaborate title cartouches appear in the lower right illustrating the map's scale, bearing the title, and the Bassett and Chiswell imprint. Francis Lamb's imprint appears between the two cartouches.

This map was engraved by Francis Lamb for Bassett and Chiswell. While sold separately as early as 1675, it appeared in only one edition of the atlas, 1676. There is only one edition of this map and most, like our example, have English text on the verso describing New England. Other variants without verso text lead Burden to speculate that there may have been a later printing between 1686 and 1688 under Robert Walton or Christopher Browne.

Francis Lamb (fl. 1667 - 1701) was an English engraver and mapmaker active in London during the second half of the 17th century. Working as an engraver Lamb produced a number of highly influential maps including four plates of the New World for inclusion in the 1676 Basset and Chiswell edition of Speed's "Prospect of the most famous parts of the world". He worked in conjunction many of the most prominent English map publishers of the 17th century including Richard Blome, John Seller, John Ogilby, Robert Morden, William Berry, Moses Pitt, Philip Lea, among others. Little is known of Lamb's personal life however he seems to have been a pupil of the British polymath Robert Hooke, who mentions him regularly in his journals. The dates of Lamb's birth and death are unknown, there is some speculation that he may have died around 1717. Baynton-Williams quotes abundantly with respect to Lamb from Hooke's diary, and the picture is of an exceedingly busy man with connections to many of the best geographical minds of his day. The novel maps he supplied for the 1676 edition of the Speed atlas may well have benefited even more from these connections than from his skill as an engraver. Learn More...

Speed, John, Prospect of the Most Famous Parts of the World, (London: Bassett and Chiswell) 1676.