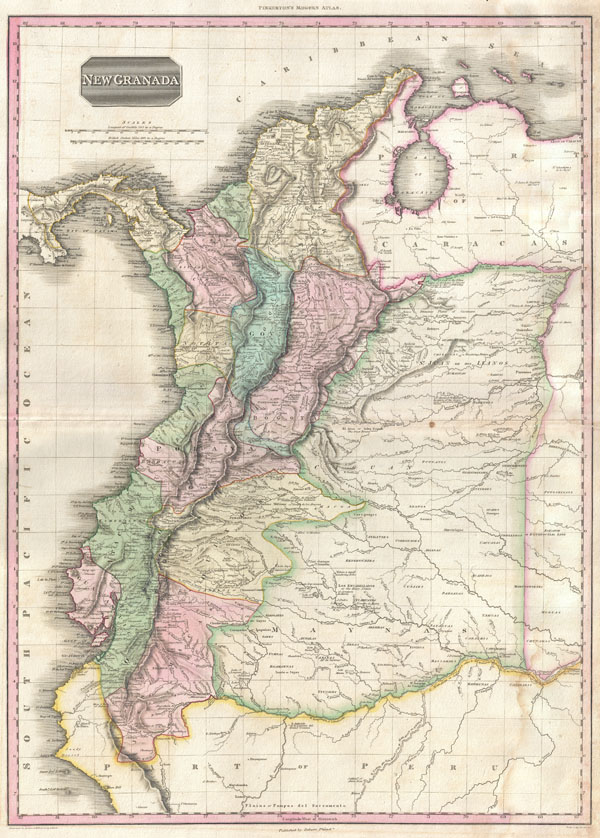 An altogether extraordinary 1818 map of the northwestern parts of South America by John Pinkerton. Covers the modern day countries of Columbia, Venezuela, Panama, and Ecuador as well as parts of Peru and Brazil. Pinkerton offers impressive detail throughout noting indigenous groups, missions, towns and cities, swamps, mountains, and river systems. Upper left hand quadrant features the title plate and two distance scales, one in British Miles and the other in Spanish Leagues.

Cartographically speaking this is an often neglected part of the world - especially in the early 19th century. Though the coastlands had been well mapped early in the 16th century, the interior was rarely penetrated. The combination of mountainous terrain, daunting jungles, malaria, and unfriendly indigenous groups combine to make this area all but unexplorable - even today. Nonetheless, Pinkerton make a commendable attempt to piece together early conquistador accounts, explorer's journals, missionary records, and indigenous reports into a coherent mapping of the area.

By far the most interesting aspect of Pinkerton's work in this region is his ethnographic commentary on the various indigenous tribes. He identifies the Gaberres 'inventors of curare, the most active poison hithero known,' the Encabellados 'or hairy nation,' and the Chiricoas 'a small wandering nation,' among others. He also names the sites of various Spanish towns and missions along the numerous inland rivers systems that spring from the Amazon and Orinoco. Pinkerton offers commentary on rapids, portages, speculative river courses, and notes on navigation. In the more populous regions on the coast and to the west of the Andes, Pinkerton names the important cities of Bogata, Quito, Caracas, and Panama.