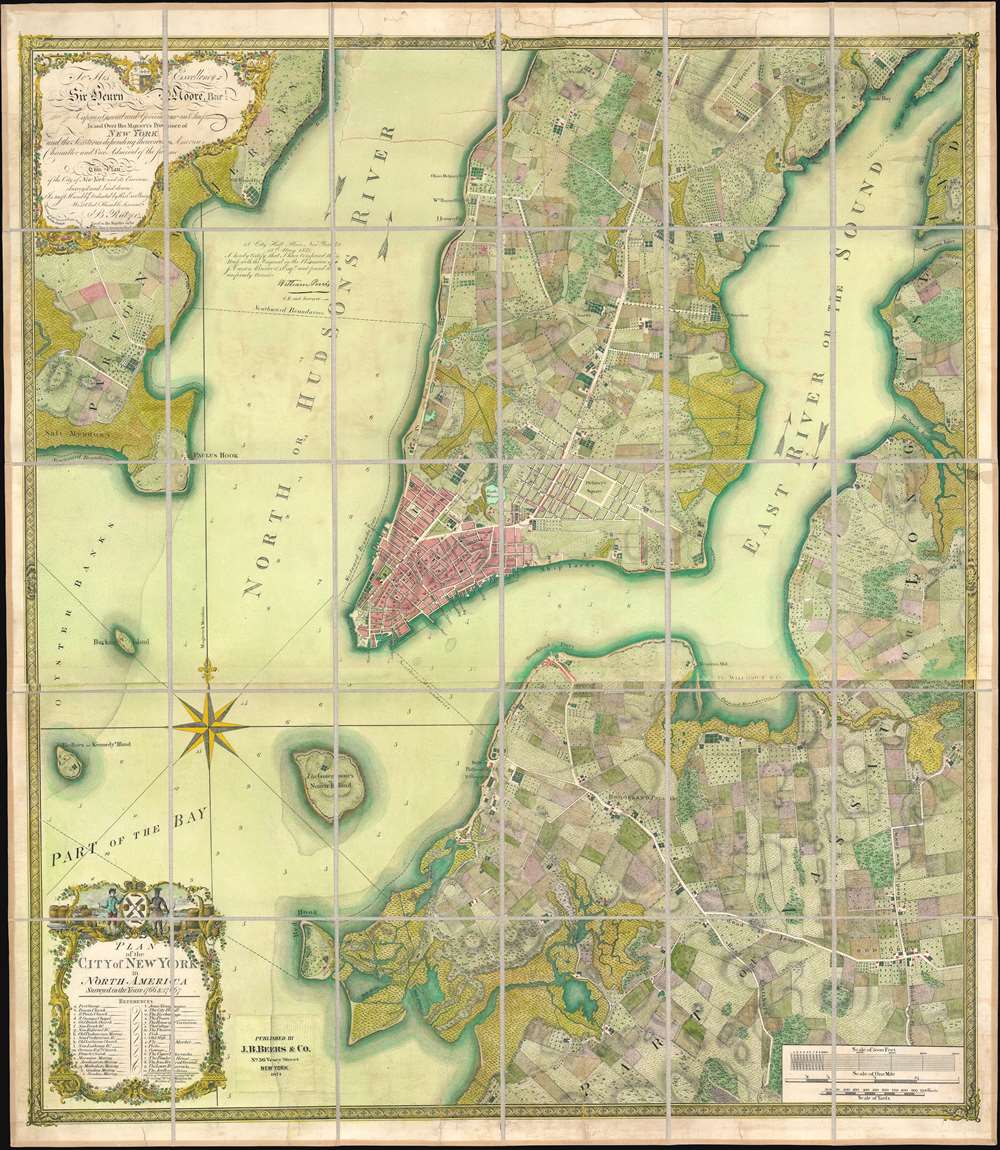 Beers / Colton edition of the most important printed map of New York compiled during the Pre-Amercian Revolutionary War colonial period.

To his excellency Sr. Henry Moore, bart., captain general and governour in chief, in and over his majesty's province of New York and the territories depending thereon in America, chancellor and vice admiral of the same : This plan of the city of New York and its environs, survey'd and laid down ; is most humbly dedicated by his excellency's most obedt. humble servant B. Ratzer.
1853 (dated)     43 x 37.5 in (109.22 x 95.25 cm)     1 : 9800

Known as the 'Ratzer Plan,' this is one of the most important, beautiful, and iconic colonial era maps of New York City, offered here in a stunning 1874 Colton / Beers restrike. This map was originally surveyed in 1767 by Bernard Ratzer, a lieutenant in the 'Royal American' regiment at the behest of Sir George Moore, governor of New York, who is sited in the cartouche. The map, which covers the southern part of Manhattan to about modern day 57th street, is a revision and expansion upon the flawed John Montresor plan of 1767. Across East River, a portion of Long Island is depicted, including most of Brooklyn and Parts of Long Island City.

This map emerged during a period of increasing unrest and political instability throughout England's North American colonies. The British victory in the French and Indian War (1754 - 1763) came at a high cost, leaving the British economy reeling, its national debt nearly doubled, and postwar expenses, including the cost of maintaining 1500 active British Regulars in the colonies, worsened the situation. To alleviate the issue, King George III and Parliament instituted the Stamp Act of 1765, a wildly unpopular direct tax on the colonies intended to defray military costs. The tax incited widespread acts of rebellion, especially in New York, where the Sons of Liberty and other separatist groups fostered a pyric anti-colonial environment.

With effigies of British nobleman and military officers burning in the streets, General Thomas Gage, then commander of British forces in North America, feared open rebellion. In preparation, he ordered Lieutenant John Montresor to immediately compile a plan of Manhattan. Montresor hastily completed the plan in just two months, which he submitted to Gage on February 8, of 1766. The plan suffered from the incommodious circumstances under which it was compiled with few streets named, their distances and orientations imprecise, and little overall detail with few structures noted. Shortly after the map was completed, Montresor returned to England on a leave of absence, taking his map with him for printing.

In the same year Parliament passed the 1765 Quartering Act, which required New Yorkers to provide housing to British Regulars. While the exceedingly unpopular act was never fully enforced, some 1500 British soldiers, among them the surveyor Bernard (Bernhard) Ratzer, descended upon New York. Ratzer, who had already established a reputation as a fine draughtsman and surveyor during the war, was called upon by Royal Governor of New York, Sir Henry Moore, to refine and complete Montresor's survey. Ratzer worked on the survey throughout the remainder of 1766 and 1767, sending it to England for engraving and publication in the same year. Ratzer continued to refine his survey, producing another larger map of New York City in 1770 and surveying the New York – New Jersey boundary.

Putting it all Together

In England, Ratzer's plan was engraved by Thomas Kitchin, one of the foremost engravers then active in London. Kitchin masterfully executed Ratzer's manuscript draught in print form, producing one of the finest maps of any American city then seen. He did however make one significant error, misspelling Ratzer's name as 'Ratzen,' thus forever dubbing this the 'Ratzen Plan.' The 'Ratzen Plan' formed the core of Ratzer's larger map of New York, the 1770 'Ratzer Map,' so named for Kitchin's correction of this error on the earlier work. That map, in turn, is the core of an enormous unpublished manuscript, surviving in the British Library, illustrating all of New York Harbor and the surrounding lands – giving evidence to the full extent of Ratzer's remarkable survey.

Augustyn and Cohen in Manhattan in Maps comment that

The Ratzer Map evokes a halcyon period in the history of Manhattan, at least in regard to its physical reality. The city at the time was a small but vibrant place with a population of about twenty-five thousand, for whom the countryside was a short carriage ride away. Also readily at hand were the recreational delights as well as economic advantages of the sea.

And indeed, the map reveals a combination of an urban landscape and rich countryside, divided into cultivated fields, gentlemanly estates (including those of Delancey and Rutgers) with geometric gardens, and salt marches. Some evidence also suggests the de-watering of the city – as seen by the partial filling of the Collect Pond, identified here as 'Freth Water' and a smaller drainage reservoir, with streets overlapping, in the Lower East Side. The religious diversity and tolerance for which New York has always been known is also much in evidence. There is a Jewish Cemetery noted in the Lower East Side, near St. James Street, and a variety of churches and synagogues noted in the reference section of the map.

This map was engraved by Thomas Kitchin and surveyed by Bernard Ratzer. The dedication references Sir Henry Moore, then governor of the New York. The first state was published in 1770 and was primarily for governmental use and as such saw a limited circulation. Only four surviving copies of the original 1770 issue remain, but the plan was reissued by Faden and Jefferys in 1776, on the cusp of the American Revolutionary War. After the Revolutionary War, Ratzer's map was practically forgotten until the mid-19th century, when cartographers looking for old records of Manhattan property ownership unearthed it and other maps. They needed this information to assist with eminent domain land repossessions under the 1811 Commissioners Act - the act that created the modern grid of New York City. To satisfy this need, the city contracted America's pre-eminent mapmaker, Joseph Hutchins Colton to reissue the Ratzer based upon an original in the library of James Carson Brevoort (1818-1887), a New York art collector. Colton later sold his plates to Frederick Beers, another New York map publisher who issued own restrike - representing the present example - in 1874. The Beers imprint appears as a pastedown I the lower left quadrant.

These 19th century reissues of the Ratzer are extremely rare - indeed, rarer than the 1776 Faden / Jeffreys issue.