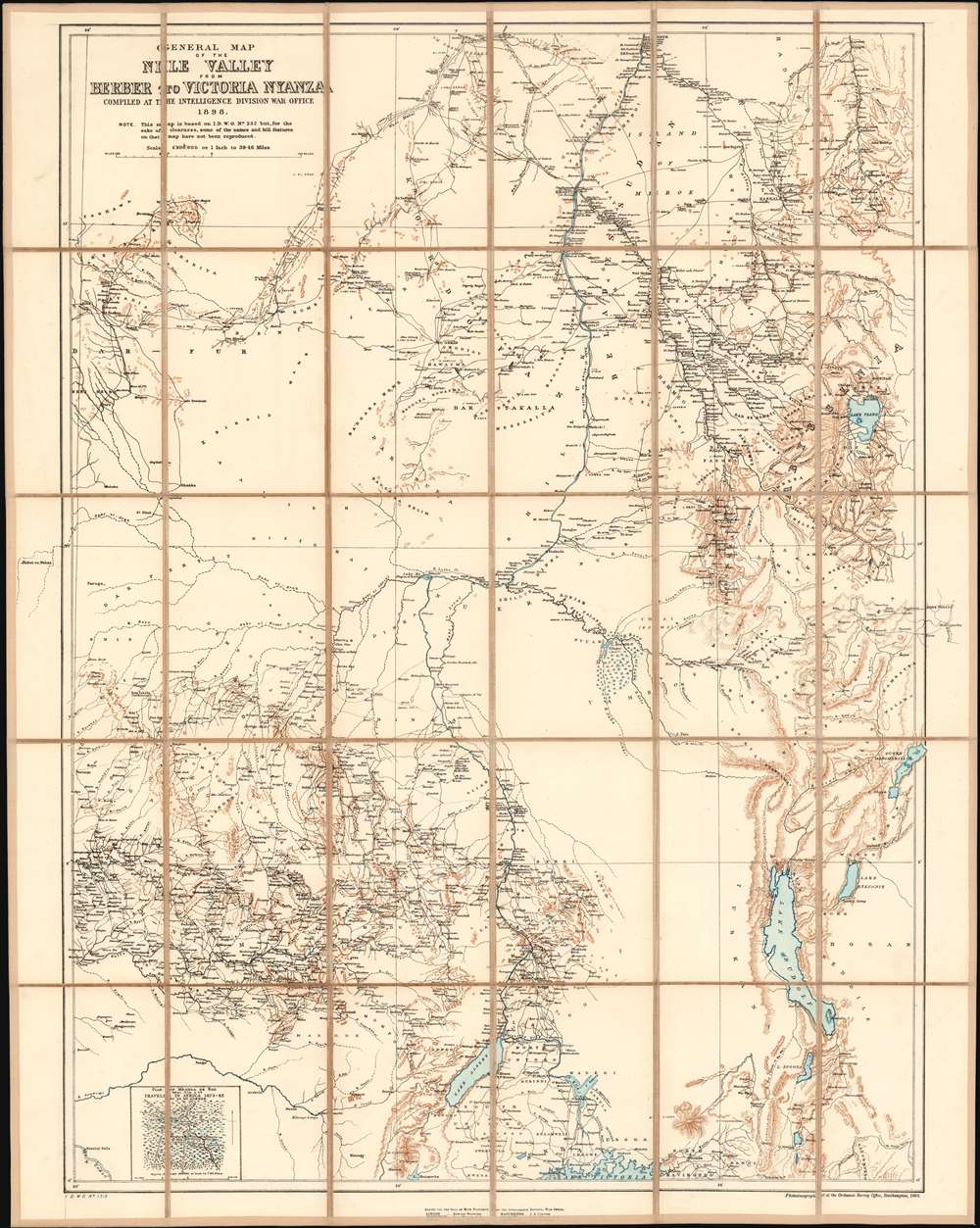 This is an 1898 British War Office, Intelligence Division map of the Upper Nile River Valley published by the Ordnance Survey. The map, printed in black, blue and sepia in the meticulous detail typical of the War Office's maps, encompasses the headwaters of the Blue Nile, the White Nile, and the northeastern Congo watershed: this region embraces Sudan as far north as Berber; Western Sudan, including the Darfur region; most, if not all, of South Sudan; Eritrea and most of inland Ethiopia; the eastern reaches of the Central African Republic; and the northeastern portion of the Democratic Republic of the Congo (Stanley Falls appears in the lower left hand corner of the map.) Most of Uganda is included, as is western Kenya. At the lower left is a detail map of Mashra‘ ar Raqq (Meshra er Rek, on the map.)

The whole of this region had been thoroughly opaque to European explorers prior to the 1880s. Though he is credited only in the detail of Mashra‘ ar Raqq, the Russian/German explorer Wilhelm Junker was certainly the main geographical source for, at a minimum, the lower left quadrant of this map. He explored the region thoroughly in the 1870s and 80s, tracking the upper courses of the Uele and the Ubangi rivers (both shown here.) His last two years in Africa were spent in the short-lived 'Lado Enclave,' a region along the upper White Nile north of Lake Albert within which Mashra‘ ar Raqq is situated. Although he had died prior to the publication of this map, his information for most of this region would have remained authoritative when the British military came in need of good maps of the region.

Junkers' move from to the Lado Enclave from Khartoum in the 1880s was necessitated by the advent of the Sudanese religious leader Muhammad Ahmad bin Abd Allah, who between 1881 and 1899 led a war first against the Ottoman Khedivate of Egypt, and then against the British. Fueled by Sudanese anger at the Turkish Ottoman rulers, lax Ottoman religious standards, and Ottoman willingness to appoint non-Muslims to high positions, Muhammad proclaimed himself Mahdi and led a religious revolt. Despite the utterly destitute and primitive supply and armament of the Mahdists, the Egyptian army's arrogance scored several early humiliating defeats which led to the Mahdist's capture of supplies, modern arms and ammunition. Following the Anglo-Egyptian War, Egyptian government passed largely to the British, who then attempted to contend with the Sudanese. Leading what Churchill would describe as 'perhaps the worst army that has ever marched to war,' retired British officer William Hicks attempted to relieve the Mahdist siege of El Obeid - and was killed along with virtually his entire force at the Battle of Shaykan on November 5, 1883 (the site and date of the battle is marked on the map.) In spite of renewed and more competent British support, Khartoum would fall to the Mahdists in 1885. Throughout the remainder of he 1880s the whole of the Sudan would fall under Mahdist control. Following their stinging defeats, Egyptian and British authorities spent the next decade reforming the Egyptian Army, and it is in the context of their efforts to reassert control over the Sudan in the 1890s that this map was produced. The final, and successful British attempt to do so (led by Kitchener) would be undertaken in 1898, with key battles fought near Ed Damer and Omdurman, (both shown on this map.)

The 'Scramble for Africa' was a series of late 19th century occupations, usurpations, annexations, divisions, and land seizures by European powers in Africa, particularly Britain, France, Belgium, Portugal, and Germany. Beginning around 1881 and continuing until 1914, the Scramble for Africa was part of the era of New Imperialism, marked by heightened occupation and direct ownership of colonial lands rather than the more traditional 'treaty based' colonization. The Scramble led to a number of new African states, many of which remain today, but few of which paid heed to traditional rivalries or cultural distinctions. The scramble culminated in the Berlin Conference of 1884, wherein European colonization of Africa was regulated and made official and the doctrine of Effective Occupation was introduced.

OCLC lists examples of this map at the Spertus Institute of Jewish Studies, Durham University Palace Green Library, the Paris Museum of Natural History, the British Library, and Oxford University. While copies have occasionally appeared in dealers' catalogues, it is scarce on the market.


Wilhelm Junker (Василий Васильевич Юнкер; April 6, 1840 - February 13 1892) was a Russian explorer of Africa. Born in Moscow of German descent, he studied medicine at Dorpat, Göttingen, Berlin and Prague, left medicine for a lifetime of travel, which took him to Iceland, Western Africa, Tunis and Lower Egypt. Between 1875 and 1888 he explored eastern Equatorial Africa from 1875 to 1886, based first in Khartoum and afterwards Wadelai in the Lado Enclave, when the Mahdist revolt made Khartoum unsafe. Junker was known for his painstaking study of the people whose countries he visited, as well as his study of flora and fauna. His travels in the Nile-Congo region results in the correct identification of the Uele and the Ubangi rivers. His African studies earned him the gold medal of the Royal Geographical Society in 1887. Learn More...

Very good condition. Dissected and mounted on linen for folding as issued.