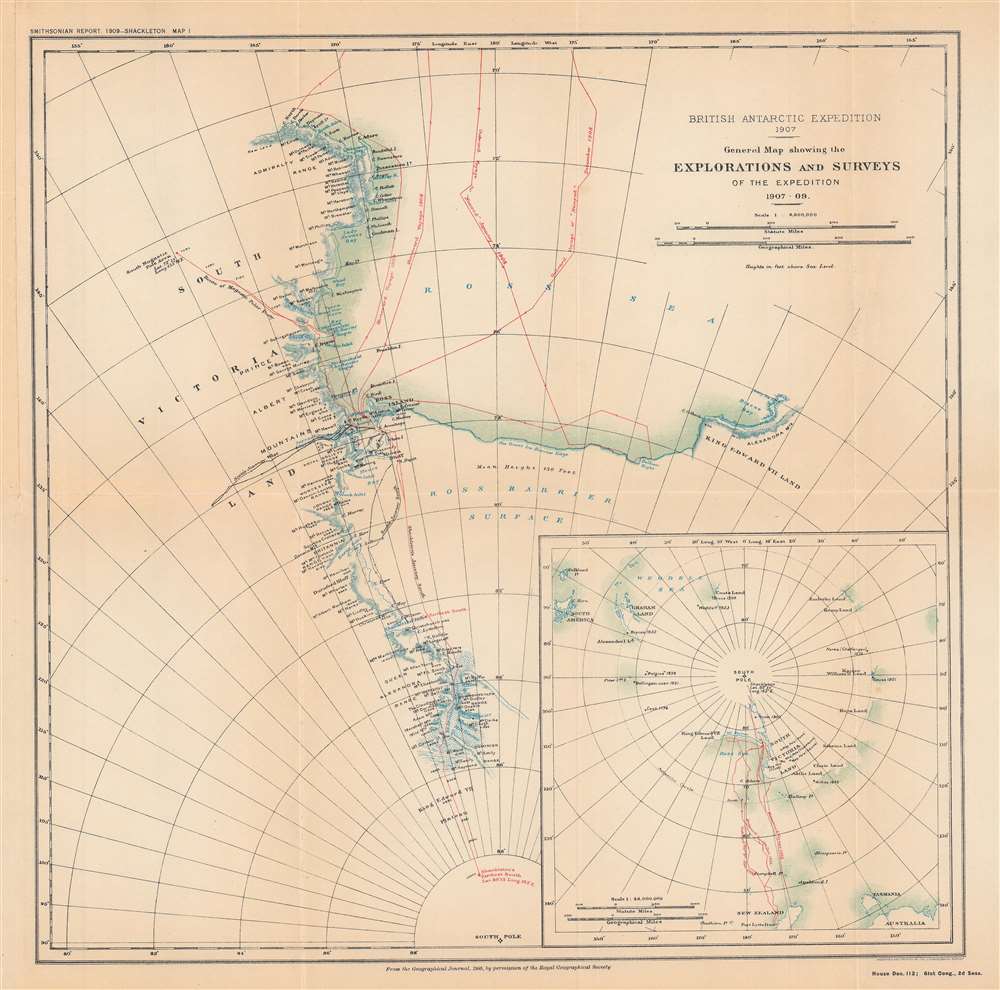 One of the most successful expeditions of Antarctic exploration.

This map shows the evolution and branches of the expedition, beginning with landfall and encampment at McMurdo Sound in January 1908. An inset map at bottom-right shows the journey's progress on a polar projection. Shackleton had initially tried to camp elsewhere out of deference to his former 'commander' Robert Falcon Scott, who had 'claimed' the sound, but alternative locations were not stable enough to set up a camp. After climbing Mt. Erebus and camping for the winter in a makeshift hut, the 'Great Southern Journey' to scout out the South Pole began.

Traveling for months over incredibly harsh terrain, low on rations, often ill, with interpersonal rivalries stewing, the southern party nonetheless succeeded in reaching the furthest south latitude of any expedition to that point and returning safely to camp. Meanwhile, a northern party travelled along the coast before heading inland to the approximate location of the South Magnetic Pole. Despite some close calls and several serious injuries, all members of the expedition were returned home.

Led by Ernest Shackleton, the British Antarctic Expedition of 1907 – 1909 was one of the most successful polar expeditions of its era, despite being a poorly funded and somewhat ad hoc undertaking. Shackleton had been a member of Robert Falcon Scott's Discovery Expedition to the Antarctic in 1901 – 1904 (shown by black lines here) but was forced to return home early due to health issues. Harboring a grudge against Scott for this decision and wanting to prove himself, Shackleton sought private backers for a return to the Antarctic. Despite having a much smaller ship than Scott's expedition and lacking the same level of official and royal support, Shackleton's expedition overcame tremendous difficulties and achieved several important discoveries. The expedition also tested innovative methods for navigating the harsh environment of the Antarctic. Despite its success and plaudits in the press, official and financial support from the government was tepid. Eventually, though, the expedition was lauded as one of the great successes of the 'Heroic Age of Antarctic Exploration.'

This map originally appeared in the The Geographical Journal of the Royal Geographical Society in 1909, and then was reprinted in a Smithsonian report to the U.S. Congress ('Annual report of the Board of Regents of the Smithsonian Institution... 1909'). This printing of the map is quite rare, only known to be held by the Illinois State Library and the Library of Congress, and has no known history the market, while the map as it appeared in The Geographical Journal is more widely dispersed.

Ernest Shackleton (February 15, 1874 - January 5, 1922) was one of the most accomplished Antarctic explorers in history. Born in Ireland to an Anglo-Irish family, Shackleton joined the Discovery Expedition in 1901 - 1904, one of the first British expeditions to the Antarctic in decades, following the initial discoveries of James Clark Ross in the 1830s-1840s. During the Discovery Expedition, Shackleton and Edward Adrian Wilson set a record for furthest latitude south reached. The 1907 - 1909 Nimrod Expedition, which Shackleton led, went further south yet, establishing a new record and reaching within 100 miles of the South Pole. Shackelton was knighted on his return to Britain and became a well-known public speaker, giving lectures about his experiences and polar exploration more generally. He then led another expedition in 1914 – 1917, named for one of its ships, the Endurance, that attempted to cross the land portion of Antarctica. The expedition went horribly wrong when the Endurance was stuck in ice and then crushed, leaving the men stranded. Shackleton led them on a months-long journey over hundreds of miles of ice and open water in a small boat, managing to ultimately return all the men safely. In 1921, Shackleton died from a heart attack on his ship off the coast of South Georgia Island while preparing for another expedition to the Antarctic. He was largely forgotten alongside other polar explorers of the era until the early 21st century, when a documentary and television miniseries starring Kenneth Branagh as Shackleton recounted his exploits during the Endurance expedition. Learn More...