1640 Tavernier Map of North Africa of the Roman Empire 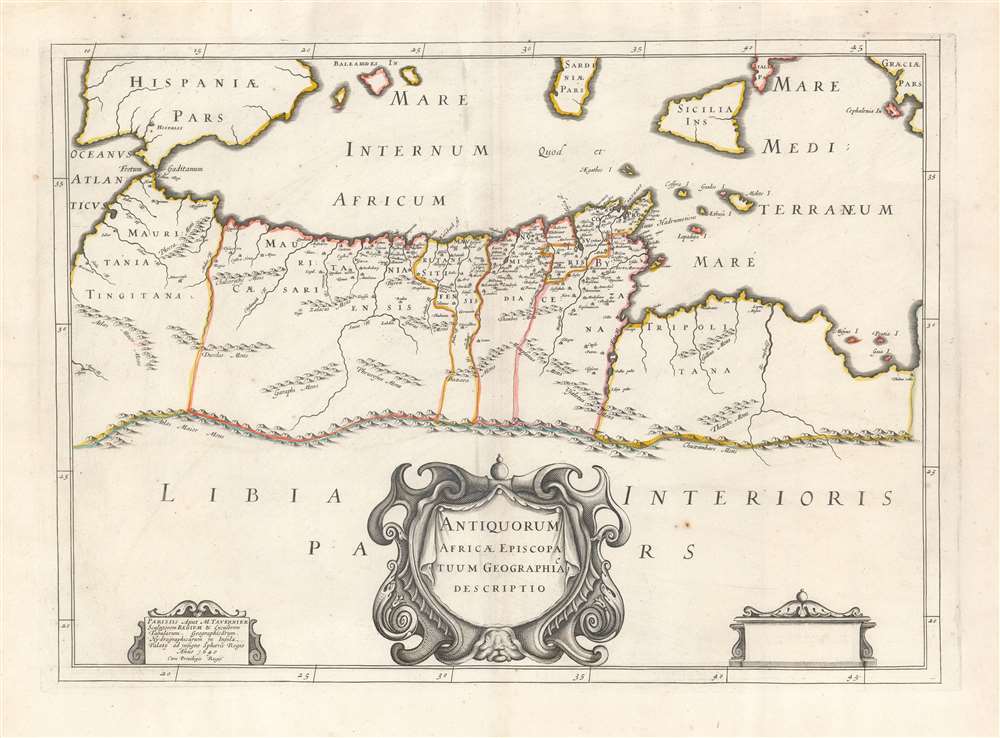 1640 Tavernier Map of North Africa of the Roman Empire

This scarce 1641 Tavernier map of Northern Africa and the Mediterranean Sea was produced for the first edition of Charles Vialart's Geographica Sacra, to illustrate the African bishoprics of the early Christian church.

The Church in Africa

Vialart's work was meant to be a religious and geographical atlas of the Catholic world, both ancient and modern. Its maps focused on the areas that fell under the Catholic aegis going back to the Roman era. This specific map focused on the reach of the Catholic Church in Roman Africa. Consequently, detail of the map extends only as far south as the Atlas Mountains, which were the limit of Roman understanding in the continent. (Control of Rome's Legionaries was more limited: their practical power extended at most to the Sala Colonia (visible on this map on the Sala Fl on the western coast of the province of Mauritania Tingitana)).

The cities noted, primarily in that province and in Mauritania Caesariensis, are well north of the Atlas Mountains. Part of Spain, the Balearic Islands, Sardinia, and Sicily are all visible, along with Malta and the other islands forming the archipelago between Carthage and Sicily.

This map was engraved by Melchior Tavernier in 1640 for inclusion in Charles Vialart's 1641 Geographica Sacra, which was also printed in Tavernier's shop. The map was later copied by Nicolas Sanson, and thereafter saw editions printed in Amsterdam by Pierre Mortier and later still by François Halma. Geographica Sacra appears in about thirty institutional collections. The separate map appears less frequently.