1843 Brue Map of North American and Republic of Texas 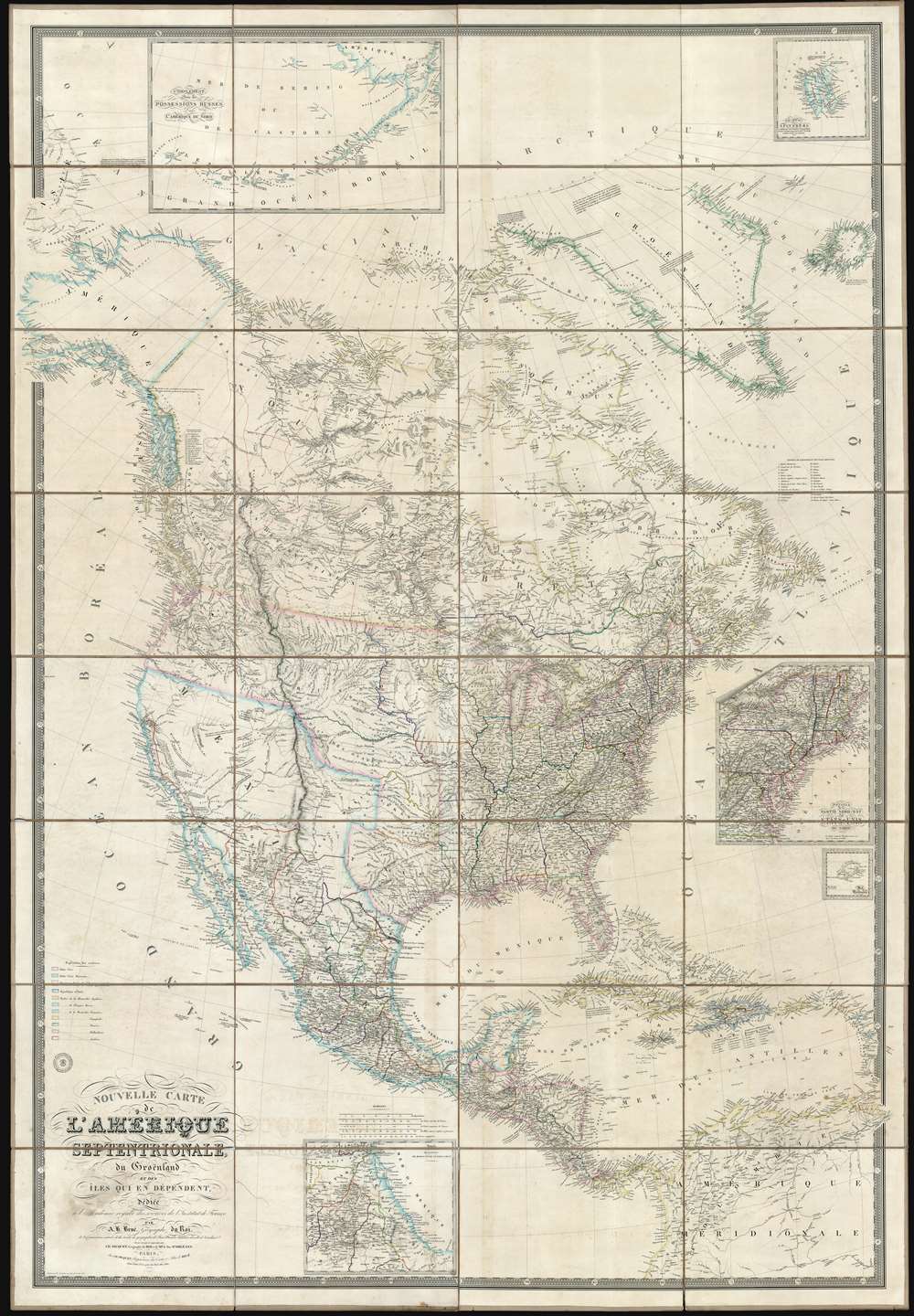 1843 Brue Map of North American and Republic of Texas

Map exhiiting French interest in a California colony and the Republic of Texas.

This is a spectacular and enormous 1843 French wall map of North America, including the Republic of Texas, dissected and on linen, issued by Adrien-Hubert Brué and Charles Picquet. The map represents an ephemeral historical period when France, coming out of the First French Intervention in Mexico, was seriously considering a colonizing play for California. With increased hegemony over Mexico, a mutually beneficial alliance with the Republic of Texas, and a potential colony in California, France was well positioned to push for dominance over all of western North America - inspiring considerable French enthusiasm and great interest in North America among the French populace. This map is perhaps the signal largest and most impressive cartographic statement of King Louis Phliippe ambitions of a new French empire in North America. While it may simply be chance, it is striking the light blue used to represent French properties is also used for Mexico, California, and Russian Alaska.

Historical Context of this Map

The Mexican War of Independence, fought between 1810 and 1821, fully destabilized the Mexican economy. Although Mexico achieved its hard-won independence from Spain, centuries of established trade relationships with Spanish interests were abruptly terminated. At the same time, Mexico had accrued a massive war debt, mostly with British financers. Lacking the ability to repay their debt, the Mexican government instead began granting trade and mining concessions to the British creditors.

They also sought another European trading partner in France. Favorable terms led to considerable French investment despite an increasingly insolvent and destabilized Mexican government. By 1830 the French investors and merchants were Mexico's third largest trading partners, after the United States and England.

Nonetheless, civil disorder throughout Mexico lead to the regular looting and destruction of private property. In 1832 a French pastry chef, Monsieur Remontel, claimed that Mexican soldiers looted his shop causing some 60,000 pesos in damage (apparently his shop was only worth about 1000 pesos). This and another offences, among them the 1837 execution of a French pirate, led the French prime minister Louis-Mathieu Molé to demand Mexico pay restitution of 600,000 pesos. When Mexico ignored the demand, the French ordered a naval blockade of all Mexico ports and sized Veracruz - what is today known as the Pastry War. Mexico ultimately agreed to pay the 600,000 pesos and offered numerous trade concessions to France, further increasing French interest in Mexican trade.

French Interest in a California Colony

By 1839, British financiers continued to press Mexico for war debt payment and the Mexican government seriously considering ceding all of California to Britain in lieu of this debt. France, with an antipathy and sense of superiority after having humiliated Mexico in the Pastry War, was not to be outdone, and took every opportunity to further destabilize Mexico to its own end. First, by recognizing Texas, and second, by laying the groundwork doe its own play for California.

The French diplomat Eugène Duflot de Mofras was dispatched to assess the viability of a French bid for California, as well as perform a reconnaissance on American and British activity in the region. Writing in 1840, shortly before this historic map was issued, Duflot de Mofras said, 'it is evident that California will belong to whatever nation chooses to send there a man-of-war and two hundred men.' In 1841, Mexican General Vallejo wrote to California Governor Juan Bautista Alvarado that '...there is no doubt that France is intriguing to become mistress of California'. At the same time, the German-Swiss francophile settler John Sutter, soon to be of Gold Rush fame, threatened to raise the French flag over California and place himself and his settlement, New Helvetia, under French protection. This map while predating Mofras' own map by one year, represents the extent of French interest in the Americas, including its recognition of Texas, and general interest in California.

This map appeared in several editions beginning in 1833. Revised editions were published in 1836, 1838, 1840, and as here, 1843. The map was the most significant French map of North America published in the early to mid 19th century. It is today quite scarce. We are aware of one other example of this 1843 edition, in the holdings of Texas Tech University's Southwest Collection. The more common 1833 first edition is represented in two European national collections and the Library of Congress.

Adrien-Hubert Brué (1786 – July 16, 1832) was a French cartographer active in the late 18th and early 19th centuries. Brué served on various ships from age 12. At 14 he was commissioned to the crew of the Naturalist, one of the two ships in Baudin Expedition (1800 – 1804) to the South Pacific. Later in life, Brué turned to cartography where his work was known for remarkable clarity and accuracy. Brué eventually acquired the prestigious office of Geographe du Roi and often signed his maps as such. In this position Brue contributed to thousands of maps and numerous atlases. Like most cartographers many of his maps were published posthumously by his partner, Charles Picquet's son and heir, Pierre-Jacques Picquet, and were still being updated and republished decades after his death. Learn More...