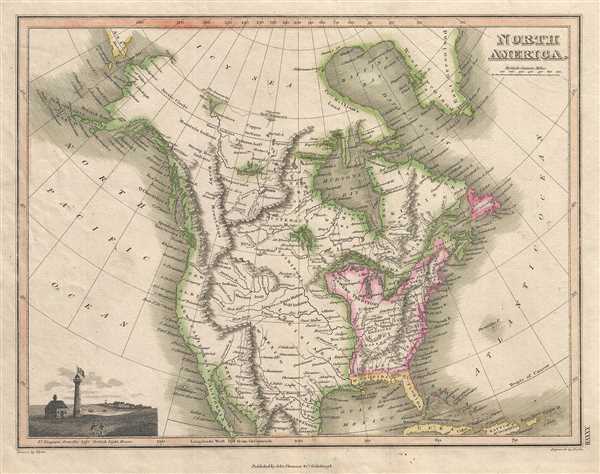 Map of North America that predates the Louisiana Purchase.
$275.00

This 1819 Thomson map of North America depicts the entire continent from north of the Arctic Circle to northern Mexico and Baja California. The United States is labeled in detail, including the Western Territory, New England, and the states of Pennsylvania, New York, Virginia, Tennessee, Kentucky, South Carolina, and Georgia. The border between the United States and Spanish-held Florida is prominent, shaded the same color as Cuba and Haiti/Santo Domingo. Louisiana and New Mexico are labeled, as well as New California, all of which are presumably under the same authority as all of Canada and Alaska. The topography of the mountain ranges is prominent, although the Rocky Mountains make an abrupt left turn and become the Sierra Nevada Mountains. To the north of the continent, the vast Icy Sea is labeled, along with Baffin Bay. There is a vignette illustration at the bottom left corner of Fort Niagara, from the British Light House.

This map was published in the first edition of James Wyld and John Thomson's 1819 General Atlas. It was drawn by Wyld and engraved by Nathaniel Rogers Hewitt.

James Wyld I (1790 - 1836) and his son James Wyld II (November 20, 1812 - 1887) were the principles of English mapmaking dynasty active in London during much of the 19th century. The elder Wyld was a map publisher under William Faden and did considerable work on the Ordinance Survey. On Faden's retirement, Wyld took over Faden's workshop acquiring many of his plates. Wyld's work can often be distinguished from his son's maps through his imprint, which he signed as 'Successor to Faden'. Following in his father's footsteps the younger Wyld joined the Royal Geographical Society in 1830 at the tender age of 18. When his father died in 1836, James Wyld II was prepared to fully take over and expand his father's considerable cartographic enterprise. Like his father and Faden, Wyld II held the title of official Geographer to the Crown, in this case, Queen Victoria. In 1852 he moved operations from William Faden's old office at Charing Cross East (1837 - 1852) to a new larger space at 475 Strand. Wyld II also chose to remove Faden's name from all of his updated map plates. Wyld II continued to update and republish both his father's work and the work of William Faden well into the late 1880s. One of Wyld's most eccentric and notable achievements is his 1851 construction of a globe 19 meters (60 feet) in diameter in the heart of Leicester Square, London. In the 1840s Wyld also embarked upon a political career, being elected to parliament in 1847 and again in 1857. He died in 1887 following a prolific and distinguished career. After Wyld II's death, the family business was briefly taken over by James John Cooper Wyld (1844 - 1907), his son, who ran the firm from 1887 to 1893 before selling the business to Edward Stanford. All three Wylds are notable for producing, in addition to their atlas maps, short run maps expounding upon important historical events - illustrating history as it was happening - among them are maps related to the California Gold Rush, the New South Wales Gold Rush, the Scramble for Africa, the Oregon Question, and more.


John Thomson (1777 - c. 1841) was a Scottish cartographer, publisher, and bookbinder active in Edinburgh during the early part of the 19th century. Thomson apprenticed under Edinburgh bookbinder Robert Alison. After his apprenticeship he briefly went into business with Abraham Thomson. Later the two parted ways, John Thomson segueing into maps and Abraham Thomson taking over the bookbinding portion of the business. Thomson is generally one of the leading publishers in the Edinburgh school of cartography which flourished from roughly 1800 to 1830. Thomson and his contemporaries (Pinkerton and Cary) redefined European cartography by abandoning typical 18th century decorative elements such as elaborate title cartouches and fantastic beasts in favor of detail and accuracy. Thomson's principle works include Thomson's New General Atlas, published from 1814 to 1821, the New Classical and Historical Atlas of 1829, and his 1830 Atlas of Scotland. The Atlas of Scotland, a work of groundbreaking detail and dedication would eventually bankrupt the Thomson firm in 1830, at which time their plates were sequestered by the court. The firm partially recovered in the subsequent year allowing Thomson to reclaim his printing plates in 1831, but filed again for bankruptcy in 1835, at which time most of his printing plates were sold to A. K. Johnston and Company. There is some suggestion that he continued to work as a bookbinder until 1841. Today, Thomson maps are becoming increasingly rare as they are highly admired for their impressive size, vivid hand coloration, and superb detail.


Nathaniel Rogers Hewitt (July 19, 1783 - 1841) was a British engraver active in London during the first half of the 19th century. Hewitt was born in London in 19th of July 1785. His map engraving work appears as early as 1804 although is most commonly associated with the 1812 - 1817 atlas maps of publisher John Thomson. Hewitt also worked with James Wyld, Samuel William Fores, and other map publishes of the period. In 1824 Hewitt announced plans to independently publish a series of Parish maps by subscription and a beautifully engraved map of St. Giles in the Fields followed. The map series must not have been able to attract many followers, as Hewitt declared bankruptcy shortly after in 1826.

Wyld, J., A General Atlas, Containing Maps illustrating some important periods in Ancient History; and distinct Maps of the several Empires, Kingdoms and States In The World, (Edinburgh: John Thomson) 1819.