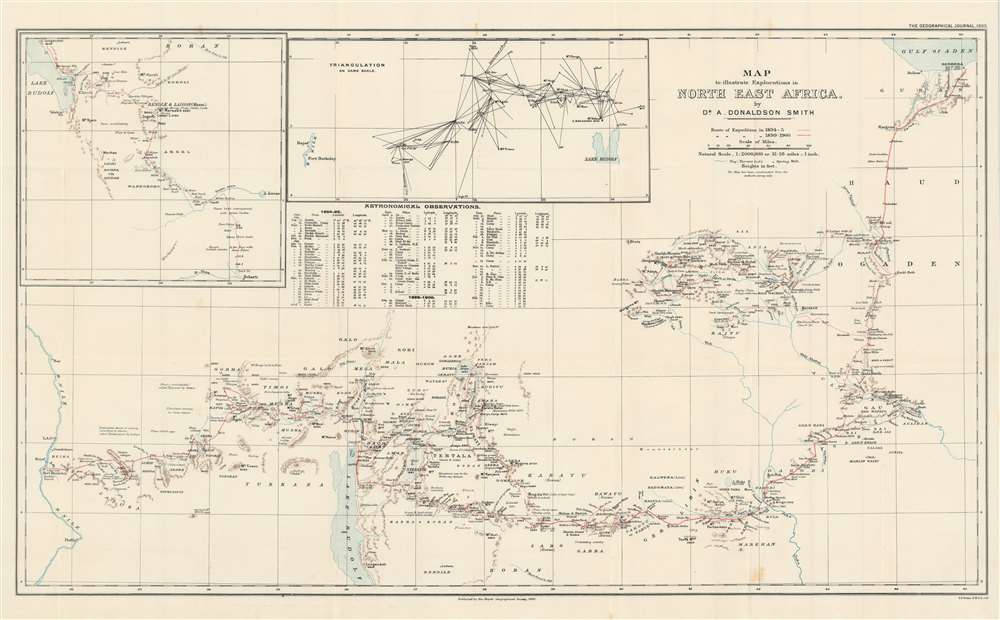 This is a 1900 Arthur Donaldson Smith map of East Africa. The map depicts from the Gulf of Aden south into modern-day Ethiopia and then west across modern-day Kenya and Uganda to the Nile River. Red lines trace Donaldson Smith's two expeditions through the region, with a dotted line following his 1894 - 1895 expedition and a solid line highlighting his route in 1899 - 1900. Locations along both routes are labeled, and Donaldson Smith provides dates when his party arrived at certain places, allowing the viewer to follow both expedition's progress across the continent. An inset map of the 1895 expedition's path south from Lake Rudolf is situated in the upper left corner next to a triangulation survey of most of the territory between Lake Rudolf and the Nile River. A chart of Donaldson Smith's astronomical observations during both expeditions appears below the inset devoted to the triangulation survey.

His first expedition explored an incredible amount of territory not yet explored by Europeans and reached Lake Rudolf (today known as Lake Turkana). He elected to travel down the Mela River to the coast but promised himself that he would return to explore the region between Lake Rudolf and the Nile River. During the 1899 expedition, he achieved his goal of exploring that territory between Lake Rudolf and the Nile, and successfully mapped over 500 miles of territory new to European knowledge. The 1899 expedition reached Fort Berkeley, an English outpost on the Nile, before taking boats to Cairo.

This map was created by Arthur Donaldson Smith, lithographed by Francis Sidney Weller, and published by the Royal Geographical Society in the December 1900 edition of The Geographical Journal. One example is catalogued in OCLC and is part of the institutional collection at The British Library.

Arthur Donaldson Smith (April 27, 1866 - February 19, 1939) was an American physician, explorer, and hunter. Smith was born in Andalusia, Pennsylvania. He attended the University of Pennsylvania and graduated in 1885. After graduating, he immediately entered medical school at the University of Pennsylvania and received his medical degree in 1889. He inherited a fortune in 1892 and immediately gave up practicing medicine and set off on expeditions. Smith led a geological expedition sponsored by the Royal Geographical Society to Lake Rudolph (now Lake Turkana) in 1894 and 1895. Smith then worked as a war correspondent during the Tirah campaign in India in 1897. Then, in 1899, he returned to East Africa and explored from Lake Rudolph to the Nile River, a distance of 500 miles through territory where no white man had ever set foot. After he returned to the U.S., Smith gave several lectures and was given several prestigious awards. He then entered the U.S. consular service and was stationed throughout Central America and the Far East. Smith served in the U.S. Army as a Captain in the Medical Corps from November 16, 1917 until December 4, 1918. After the war, Smith opened a medical practice in Roulette, Potter County, Pennsylvania, and lived in Philadelphia. He retired after several years and moved to St. Petersburg, Florida. He never married. Learn More...

Donaldson Smith, A. 'An Expedition Between Lake Rudolf and the Nile'. The Geographical Journal Vol. 16, No. 6 (London: Royal Geographical Society) 1900.