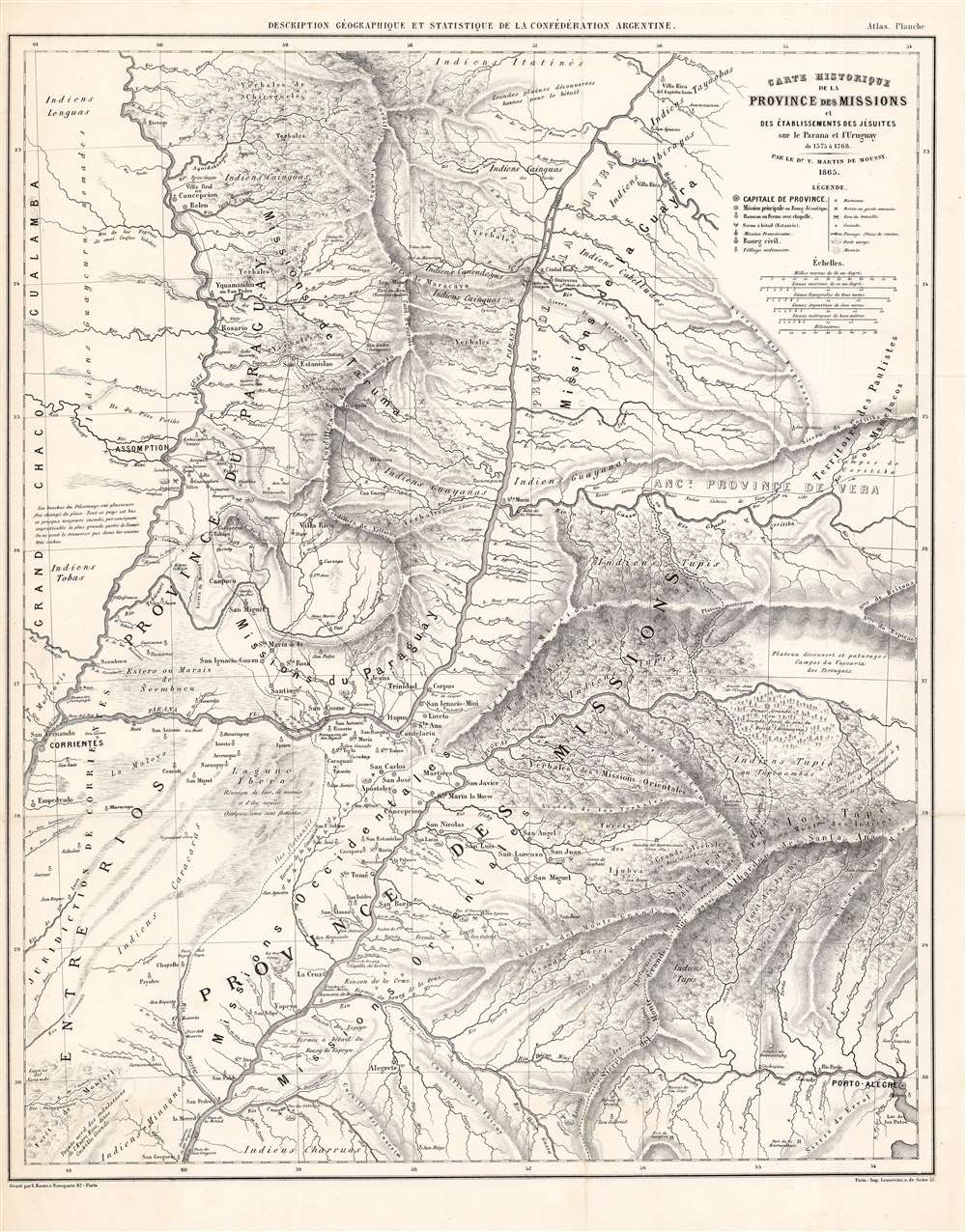 This is an 1865-dated (1873) map of Paraguay and the neighboring Missions Province, an often-contested land between that country, Uruguay, and the Argentine Confederation. It was the work of French émigré physician and surveyor Martin de Moussy (Victor) who explored the region on behalf of the Argentine Confederation. It is a superbly detailed work, marking current settlements and former Jesuit ones, Indigenous regions, and the locations of battles fought in the 1851-52 Platine War, during which Martin had served in the Argentine National Guard.

The July 19, 1852, treaty between the Argentine Confederation and Paraguay (following the 1851-2 Platine War) was written to dispose of two areas: the area west of the Paraguay River, assigned to Paraguay; and the Misiones region (southeast of the Paraná River), assigned to Argentina. Despite belonging to Argentina by the treaty, the region was administered and claimed by Paraguay, Argentina having refused to ratify the treaty. Claims to these lands would remain sticking points in the relations of the nations of the La Plata region, but not so much as did the rights for travel on the rivers - over which Paraguay jealously exercised control. Following the war, Martin was assigned by Argentina to survey the Rio de la Plata as well as the Uruguay and Paraguay rivers. Following his return to France he published accounts of his travels, in particular, his 10-volume Description geographique et statistique de la confederation Argentine,in which this map was included.

This map was printed by Lemercier in 1873 for inclusion in V. Martin de Moussy's 'Description geographique et statistique de la confederation Argentine, 'the first atlas of the Argentine Confederation'. The work is quite rare. There are just two examples cataloged in OCLC which are part of the collections at the Bibliothèque Nationale de France and the Biblioteca Nacional de España. A further example is known in the David Rumsey collection.

Victor Martin de Moussy (June 26, 1810 - March 26, 1869) was a French physician and author. In 1841 he emigrated to Rio de Janeiro, resettling to Montevideo in 1842, where he became successful in his vocation. He became rich enough to quit medicine, and became a patron of the sciences - he founded an astronomical observatory, which he donated to the city. For ten years the observatory operated with good results.

The 1846 siege of Montevideo by Rosas and Oribe led him to encourage the foundation of a foreign national guard: one French and the other Italian (and everyone else.) Martin served as physician of both legions, which mainly provided civil order during the war. The legions were dissolved with the 1852 peace. Following the war, Martin explored the Rio de la Plata on behalf of the Argentine government travelling from 1855 to 1858 surveying that river as well as the Uruguay, and Paraguay rivers. Ill health would send him back to France in 1859, where he would publish accounts of his travels, in particular his ten volume 'Description geographique et statistique de la confederation Argentine.' Learn More...