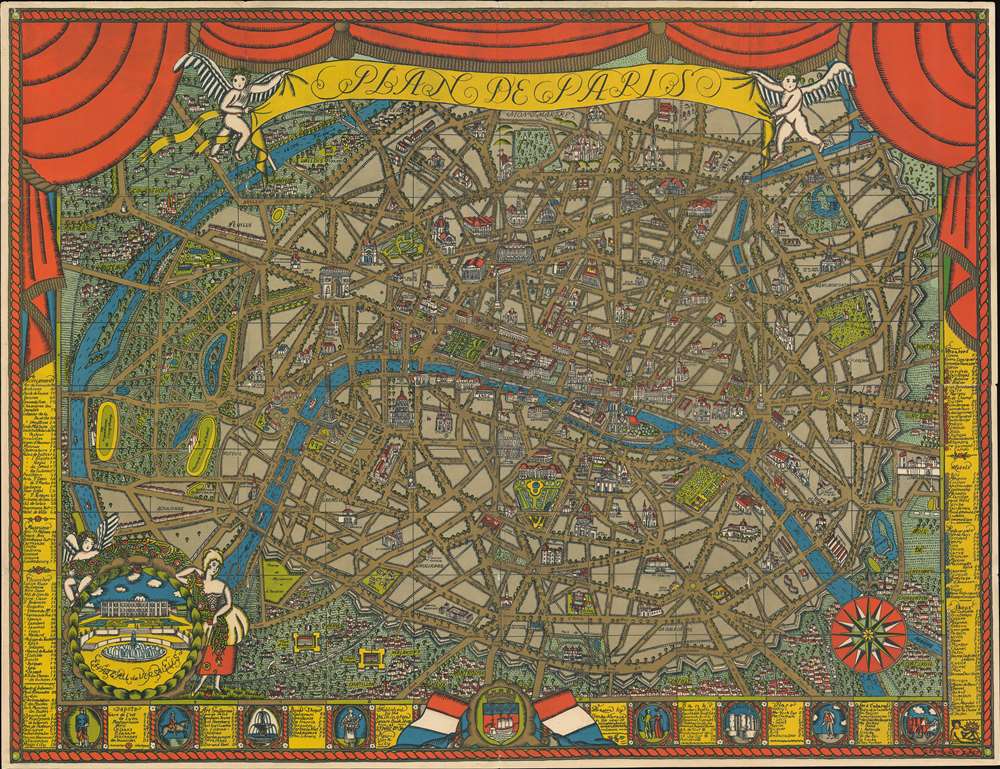 A finely executed large-scale 1927 pictorial map of Paris, France by the avant-garde Greenwich Village illustrator Ilonka Karasz. Paris is presented as if on a stage, with red curtains wide open. Coverage roughly follows the Thiers Wall, which at this time was active being deconstructed. The map is surrounded by decorative imagery and a key naming monuments, museums, churches, points of interest, railroad stations, art galleries, book shops, banks, bars, cabarets, theaters, hotels, restaurants, and shops.

In the Word's of David Rumsey

Karasz's design and the vivid color printing used for this map of Paris are especially unusual and striking. All of the principal avenues of the City are clearly depicted and appear heightened with gold color finish that enhances the sense of decorative 'old style' luxuriance that pervades the whole composition.

Title cartouche includes two winged cherubs holding a banner title top center while a pair of red curtains are drawn back to reveal a detailed plan of the City of Paris.

Map extending from Montmartre in the North to Chatillon, Blvd Jourdan and the vestiges of the southern City walls in the south, to Nanterre and Courbevoie in the West and Vincennes in the East, All of the major parks and gardens of the City and its immediate environs are equally attractively delineated with their trees and principal features. Shows historic sites and buildings in detailed three-dimensional vignettes.

A roundel inset lower left shows Marie Antoinette as a bucolic shepherdess beside a fine view of the gardens and facade of the Chateau of Versailles, and compass rose on the lower right. Index panels to the left and right sides of the map as well as the bottom denote the principal monuments, museums, churches, and sites of historic interest, as well as shops, bookshops, art galleries, banks, bars and restaurants. The lower border of panels showing historical scenes.

We are naturally curious why Karasz chose to make a map of Paris. It may be related to the Armenian born mystic George Ivanovich Gurdjieff (1873 - 1949). Gurdjieff lived in Paris at the time and both Karasz and her husband, William A. Nyland (1890 - 1975), were followers. They met Gurdjieff in 1924, while on a speaking tour in New York, and following him to Paris for several years. This map can only have been inspired by that visit.

This map was designed by Ilonka Karasz and published in New York by the Washington Square Book Shop. The bookshop was a fixture in Greenwich Village life. It was owned and operated by Josephine Bell Horton (1888 - 1967) and Chase Horton (1897 - 1985). Josephine, in particular was fond of pictorial maps through the bookshop, had a hand in producing several important pictorial maps of the period. The OCLC sites 4 examples in institutional collections. We are aware of additional examples in the Rumsey collection at Stanford. This map is scarce on the market.

Ilonka Karasz (July 13, 1896 – May 26, 1981) was a Hungarian-American cartographer, industrial designer, and illustrator active in New York in the early to mid-20th century. Karasz was born in Budapest, Hungary. She was one of the first women admitted to the Royal Academy of Arts and Crafts. She emigrated to the United States in 1913, when she was seventeen, establishing herself as an artist in Greenwich Village. In 1914, Karasz partnered with Winold Reiss (1886 - 1853) to found the European-American artists' collective Society of Modern Art. Shortly after it was founded in 1915, she took a position teaching textile design at the Modern Art School. Karasz was exceptionally versatile, producing textiles, wallpaper, wrapping paper, furniture, nurseries, tea sets, china plates, maps, and book jackets. She is perhaps best known for her cover-art contracts for the New Yorker from 1924 to 1973. Although not known as a cartographer, Karasz incorporated maps into various aspects of her work, from book cover design to wallpaper. Her largest map is a 1927 pictorial map of Paris. Several of her New Yorker covers are also cartographic in nature. Karasz died at her daughter's home in Warwick, New York, seven weeks before her 85th birthday. Her work was subsequently subject to several gallery shows and retrospectives. Learn More...