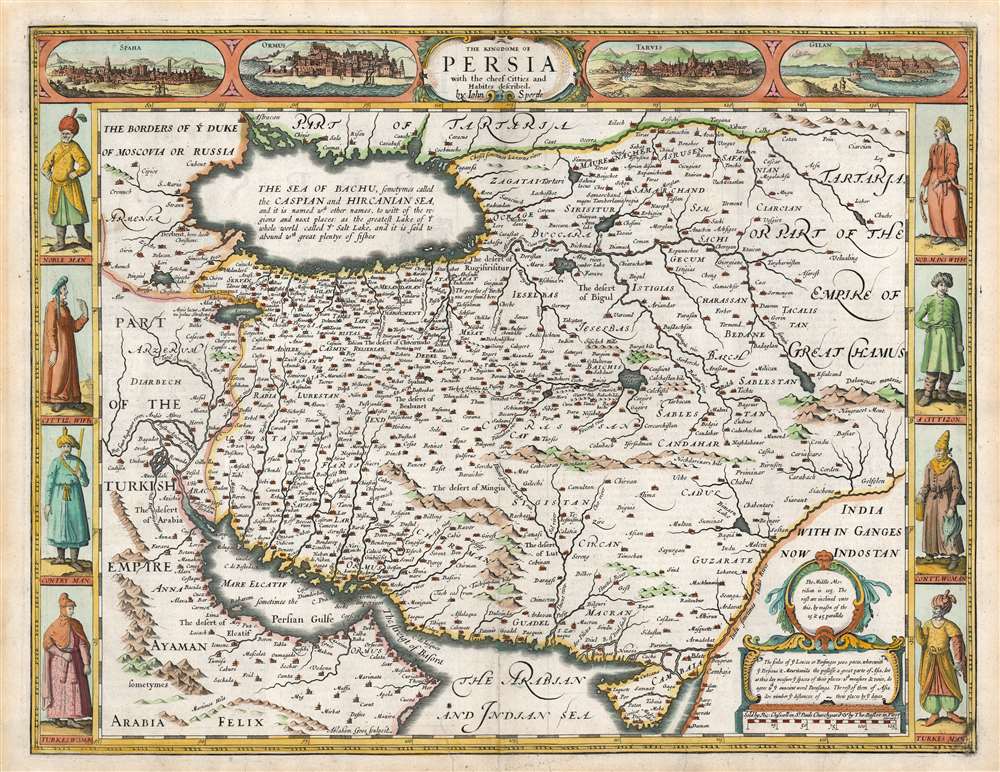 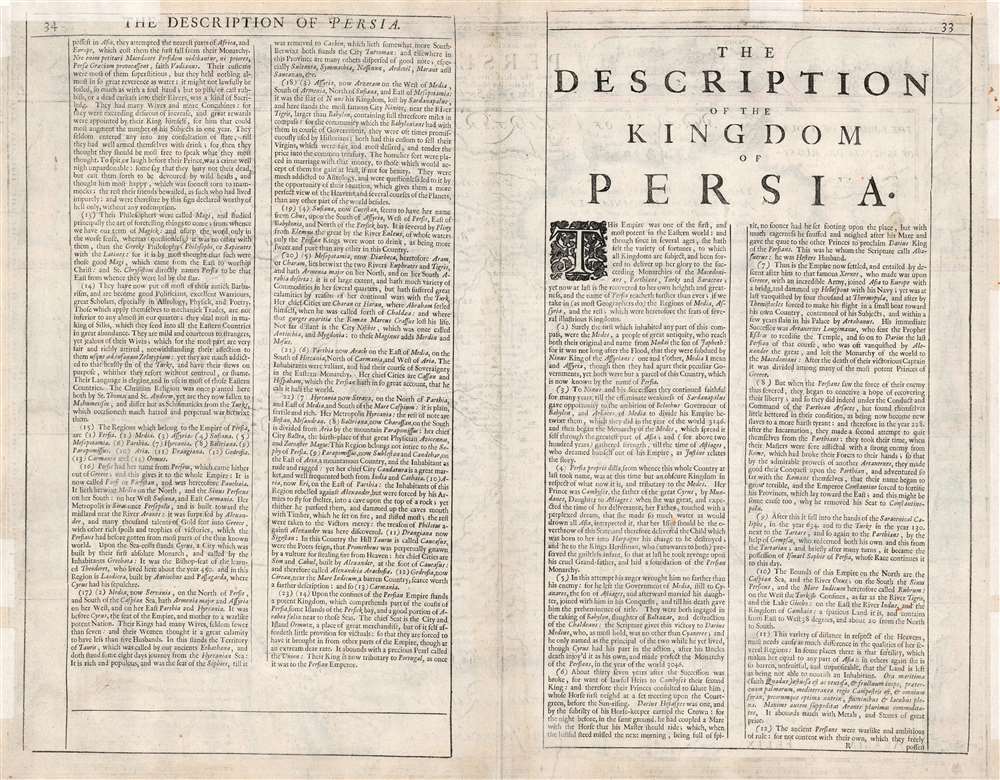 This is John Speed's map of Persia - the 1676 Bassett and Chiswell edition of the first English map of the region. This beautiful map is one of the most desirable early maps of the Near East, combining superb engraving, attractive Dutch styling, and entertaining and abundant English text. While Speed cannot be accused of innovation as a mapmaker, he was an accomplished historian and compiler. His atlases of the British Isles and the World are among the signal cartographic works of the 17th century.

The cartography for this map is drawn from the maps of Jodocus Hondius (whose student Goos actually engraved this map), but is unique among maps of this region for its carte á figures borders depicting Persia's chief cities and the modes of dress of its people.

The map is centered on the Persian Empire under the Safavid Dynasty (1501 - 1736), extending eastwards to the Indus River, beyond which the 'Empire of Great Chamus' held sway. To the west, the Fertile Crescent and Arabia are part of the Ottoman Turkish Empire. The Caspian Sea is shown in the fat, ovoid form first appearing in the geography of Claudius Ptolemy. This model was not replaced until the end of the 17th century, and the Caspian Sea was not correctly depicted on a map until the 1720s. The southernmost extents of the Grand Duchy of Muscovy can be seen in the Caucasus, northwest of the Caspian. The lands west of the Volga are dominated by Tartaria: the empire of the Great Khan.

The map is drawn on a long-lived geographical model, only slightly changed since the mid-sixteenth century. Speed's map was derived from that of Hondius, whose map was based on that of Ortelius - and his found its detail primarily in that of Giacomo Gastaldi's 1559 Il Disegno Della Prima Party Del Asia. Gastaldi's seminal map captured Persia during the first century of the Safavid Dynasty (1501 - 1736). Happily, for the mapmakers that followed, the same dynasty remained in power until 1736 and thus arguably the Flemish and Dutch successors to Gastaldi's map were at the very least no less obsolete. The map's treatment of the coastline is fairly accurate, but its copious interior place names become less precise the further east and north one gets. For example, in Afghanistan, 'Cabul' appears to the south of 'Candahar.' The geography for this region, and that spanning to the east, would remain some of the most poorly understood among inhabited lands well into the 20th century.

Presenting the Idea of Persia

This map displays the classic elements associated with the carte á figures as a form: key city views along the top border, along with figures to the left and right depicting the denizens of the lands. The cities are Isfahan (Spaha), Hormuz (Ormus), Tabriz in Azerbaijan (Tarvis) and what is probably the Caspian port of Bandar Anzali (Gilan, actually the name of the province). All of these were key trade cities in the western part of the Persian Empire. Gilan Province was the principal Asian silk exporter to the west, for example. The left and right borders display Persian and Turkish men in customary garb, paired with their respective wives.

The map's verso includes Speed's historical text on the Kingdom of Persia, written in entertaining and idiosyncratic English.

Speed's adoption of the Dutch carte á figures map style (and indeed, the entirety of the Dutch state-of-the-art for Asian mapping) becomes unsurprising when one considers Speed's dependency on Dutch engravers. Virtually all of the maps produced for Speed during his lifetime were executed by Jodocus Hondius and (as is the case here) his protégé and student Abraham Goos. It would appear that, until well into the 17th century, the art of engraving in the British Isles was unequal to the challenge posed by the production of maps of this quality. Not until this 1676 Bassett and Chiswell edition of Speed's work would maps be included that were actually executed by an Englishman, Francis Lamb.

Although Speed died in 1629, his atlas was kept active long afterwards as its plates passed from George Humble to William Garrett to Roger Rea and ultimately to Basset and Chiswell, whose final edition of 1676 is the most easily found. This 1676 edition of the separate map is only listed twice in OCLC along with a dozen of other editions. Basset and Chiswell's Theatre of the empire of Great-Britain is well represented in institutional collections.

Speed, John, The Theatre of the Empire of Great Britaine, (London: Basset and Chiswell) 1676.