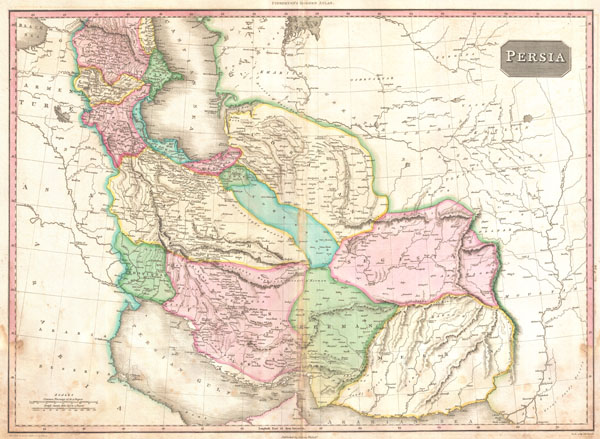 A rare and important 1818 map of Persia by John Pinkerton. Depicts from the Black Sea eastward as far as the Indus Valley, extends north to the Aral Sea and South to the Persian Gulf and the Arabian Sea. Includes the modern day countries of Iran and Afghanistan, as well as parts of adjacent Pakistan, Kuwait, Iraq, Turkey and Arabia. Notes both political and physical geographic elements, including rivers, mountains, under sea dangers, various tribal regions, cities, ruins, and canals. In particular, notes the ruins of both Babylon and Persepolis. Drawn by L. Herbert and engraved by Samuel Neele under the direction of John Pinkerton. The map comes from the scarce American edition of Pinkerton's Modern Atlas, published by Thomas Dobson & Co. of Philadelphia in 1818.