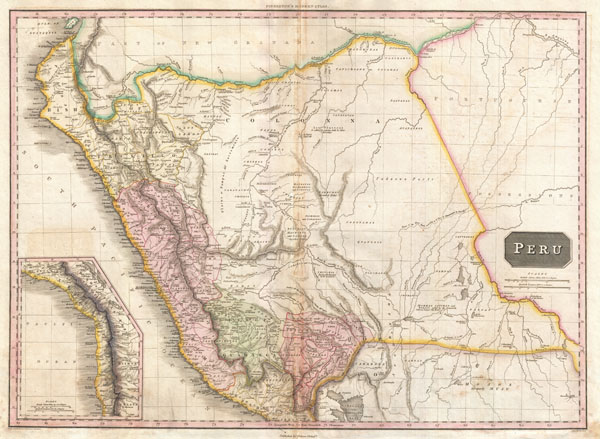 This is John Pinkerton's stunning 1818 map of Peru. Covers the western parts of South America from the Gulf of Guayaquil, in modern Ecuador to Lake Titicaca, modern Peru-Bolivia, and inland well into the Amazon and what is today Brazil. This beautifully rendered map is truly a masterpiece of engraving, with mountain ranges, lakes, deserts, and rivers excited with such precision that the result appears almost three dimensional. Pinkerton injects astounding detail throughout with countless towns, cities, geographical features, rivers, islands and bodies of water noted. This map offers a smorgasbord of speculative cartography - especially in the largely unexplored eastern regions and the Amazon basin. Pinkerton names countless indigenous groups, numerous speculative river systems, questionable mountains and mountain ranges, and a number of notes relating to the supposed discoveries of this or that explorer. The lowlands to the west of the Andes are mapped with considerable precision, contrasting sharply with the less known regions to the east and reflecting some of the challenges in administering Peru's easternmost provinces. One of the finest British atlas maps of Peru to appear in the 19th century.