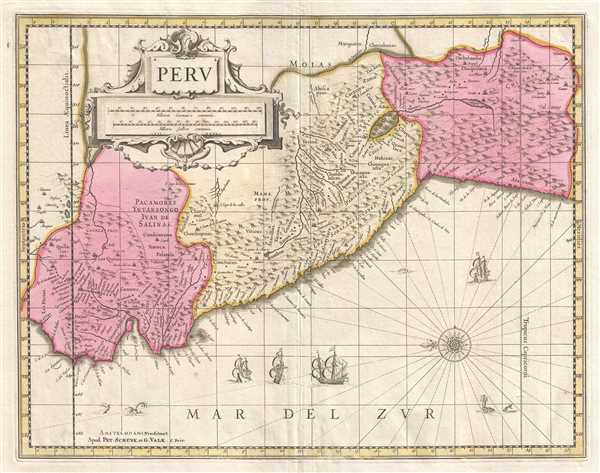 An incredible map of Peru clearly showing the unknown of the Amazon region.
$400.00

This is a c. 1700 Pieter Schenk and Gerard Valk map of Peru. The map, oriented towards the east, depicts the region from Los Pastos to Val Xuxuy and from an area east of Peru along the Omapalchas River and home to the Marquires and Cheriabonas Indians to the Pacific Ocean. Highly detailed, myriad cities, towns, and villages are labeled, along with the names of numerous Indian tribes native to the region. Lake Titicaca is prominently illustrated, as are the Andes, which extend along the length of Peru. Intriguingly, as the map progresses further and further to the east, into the Amazon, the map become blank, indicating the complete lack of knowledge about the region. Beautiful sailing ships are included in the Pacific, close to a ghastly sea monster. A decorative cartouche bearing the map's title and scale is situated in the upper left corner.

Petrus Schenk (Pieter Schenck) the Elder (December 26 1660 - 1711) was a Dutch engraver, globe maker, and map publisher active in Amsterdam and Leipzig in the latter half of the 17th century. Schenk, was born in Elberfield, Germany. He moved in Amsterdam in 1675, becoming the apprentice to Gerard Valk (Valck). In 1687, Schenk married Agatha Valk, Gerard Valk's sister and went into partnership with his brother-in-law under the imprint of 'Valk and Schenk'. Initially they focused on maps and atlases, acquiring the map plates of Jan Jansson and Jodocus Hondius in 1694. Later, in 1701 they moved into the former Hondius offices where they began producing globes. Valk and Schenk quickly became known for producing the best globes in the Netherlands, a business on which they held a near monopoly for nearly 50 years. Schenk's three sons, Pieter Schenk the Younger, Jan Schenk, and Leonard Schenk, all became engravers in their own right. Pieter Schenk the Younger inherited the business and ran his father's shop in Leipzig. His daughter, Maria Schenk, married Leonard Valk, the son of Gerard Valk, and continued to run the Valk and Schenk map engraving workshop in Amsterdam.


Gerard Valk (September 30, 1652 - October 21, 1726) was a Dutch engraver, globe maker, and map publisher active in Amsterdam in the latter half of the 17th century. He studied mathematics, navigation, and cartographer under Pieter Maasz Smit. He later worked in London for the map sellers Christopher Browne and David Loggan. In 1687 he established his own firm in Amsterdam in partnership with Petrus (Pieter) Schenk, who married his sister in the same year. They published under the imprint of Valk and Schenk. Initially they published maps and atlas, acquiring the map plates of Jodocus Hondius in 1694. Later, in 1701 they moved into the from Hondius offices where they began producing globes. Valk and Schenk quickly became known for producing the best globes in the Netherlands, a business on which they held a near monopoly for nearly 50 years. He joined the bookseller's guide in 1711. Around the same time Gerard introduced his son, Leonard, to the business. Leonard was nowhere near as sophisticated a cartographer as his father and ultimately, through neglect, lost much the firm's prestige. After his death the firm was taken over by his widow Maria.