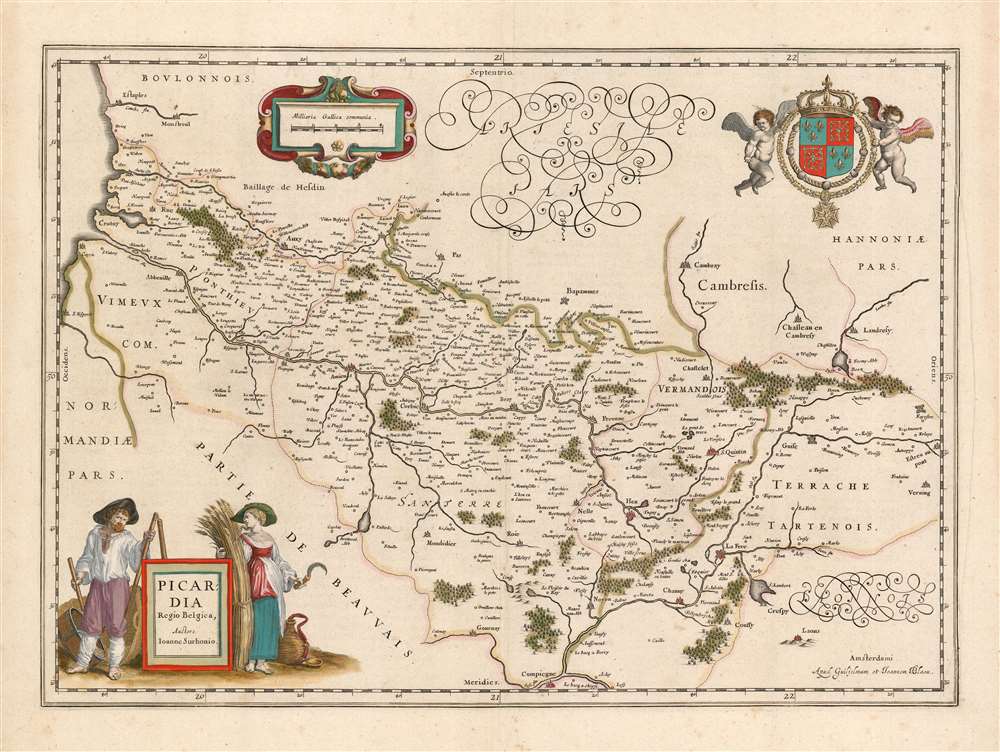 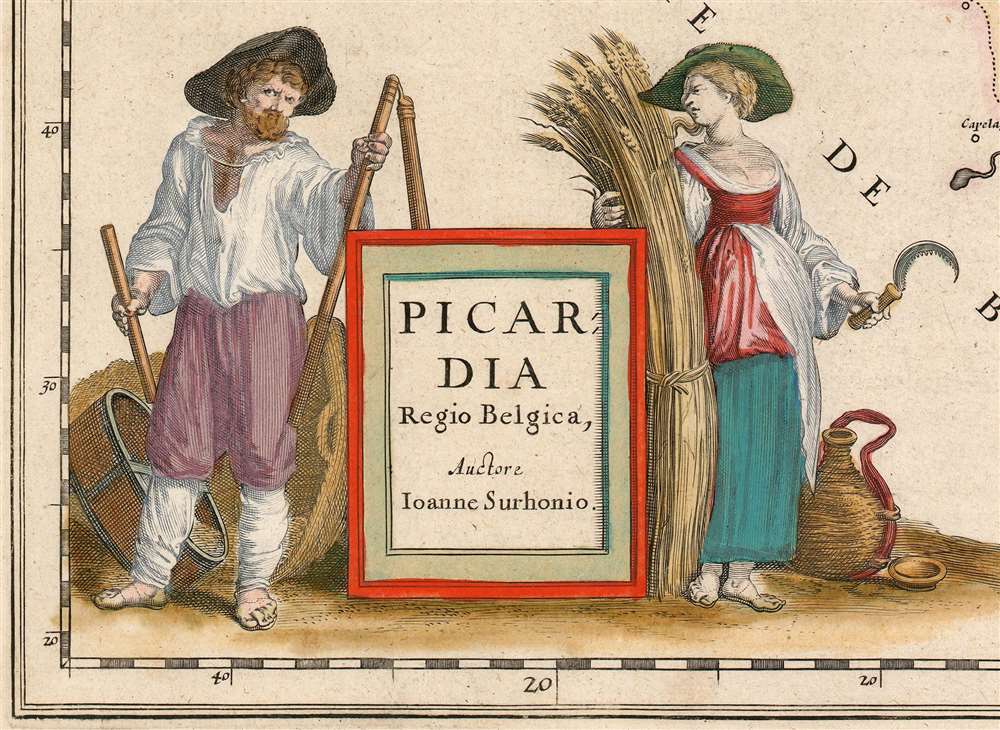 With a beautifully engraved, humorous yet puzzling cartouche.
$350.00

This is Willem Blaeu's map of Picardy, easily the most entertaining map ever produced of this region of northern France. The map focuses on the Somme River valley. Amiens, chief city of the region, St. Quentin and La Fere are given particular emphasis. Putti bear a superb coat of arms with Fleurs-de-lis aloft in the upper right, and the scales are presented in a strapwork frame. The beautifully engraved title cartouche deserves a description unto itself.

The Farmer and His Wife

The map's title cartouche is graced with an astonishingly homely and evocative scene. It is flanked by a farmer and a woman who, by her expression of pointed anger, can only be his wife. Sickle in hand, she glares at him while he peers at the reader under furrowed brows. This writer's spouse was alarmingly quick to assess the scene: 'He didn't do what he was supposed to do with the wheat, and she's annoyed because now she has to do it.'

While the story told in this vignette appears to be plain enough, its context here is obscure. Why are this woebegone husband and his infuriated wife being associated with Picardy? There are many folk tales playing variations on the theme of The Farmer and His Wife - is there a specific one being alluded to? It would not be the only time a sly allusion to the politics of a region would be slipped into the decorations of a map. It may be a simple jibe by sophisticated Amsterdammers at the expense of the rustic denizens of a contested borderland.

The cartography itself is not innovative: Blaeu's map is a faithful reproduction of Jean de Surhon's 1557 map, as presented in Abraham Ortelius' 1579 Theatrum Orbis Terrarum. Both great atlas makers were keener surveyors of cartographic sources, than of the lands themselves.

Jean de Surhon produced his map in 1557, the year in which Picardy was invaded by Habsburg forces under the command of Emmanuel Philibert, Duke of Savoy during the so-called Italian War between France and the Holy Roman Empire. The campaigns in Picardy would be marked by pronounced Habsburg victories, in particular that of the The Battle of Saint-Quentin of 1557. Therefore at the time Surhon's map was produced, Picardy was not so much part of France (Gallia) as it was part of The Habsburg Netherlands (Belgica.) The 1559 Treaty of Cateau-Cambrésis, however, would return St. Quentin and the lands of the Somme to the French - hence the French coat of arms decorating the map.

This map first appeared in Blaeu’s Atlas Novusin 1635, continuing to appear in that work until it was replaced by Joan Blaeu's updated - yet relatively charmless - map for his Atlas Maior. This example appeared in one of the Latin editions of Atlas Novus, between 1644 and 1655. There are about fifteen examples of the separate map cataloged in institutional collections.


Jean de Surhon (fl. 1550-1600) was a Franco-Flemish engraver and cartographer. His father and brother, both named Jacques, were engravers and cartographers as well: his father was also a silversmith. He is remembered for those of his maps which were incorporated in Ortelius' Theatrum Orbis Terrarum: those of Namur (1553), Vermandois (1557) and Picardy (1557). The original maps do not appear to have survived, and thus Ortelius' versions are the earliest acquirable to the collector. The first, 1570 edition of the Theatrum contained the map of Vermandois: Namur and Picardy first appeared in the 1579 edition. It is a testament to Surhon's maps that no improvement was made to them until the second half of the seventeenth century: Willem Blaeu's atlas would reprise Surhon's work in a faithful, though more beautiful copy of the Ortelius. Learn More...

Blaeu, W., Atlas Novus, (Amsterdam, 1644-55).     The classic Dutch atlas, whose publication ushered in the Dutch golden age of cartography. Willem Jansz Blaeu had been, since 1604, producing engraved maps for sale; these were separate issues (and all consequently extremely rare) until the publishing of Blaeu's Appendix in 1630 and 1631, which also included a number of maps purchased from the widow of Jodocus Hondius, (for example his famous iteration of John Smith's map of Virginia.) In 1634, he announced his intention to produce a new world atlas in two volumes, entitled Theatrum Orbis Terrarum, sive Atlas Novus (in an effort to invoke the successful work of the same title produced by Ortelius the previous century, while reinforcing the notion of it being a new work.) This work was published first in German in 1634, followed by Latin, Dutch and French editions in 1635. Blaeu's maps have always been noted for the quality of their paper, engraving and fine coloring, and this was the intent from the very start. The 1634 announcement of the upcoming work described it: 'All editions on very fine paper, completely renewed with newly engraved copperplates and new, comprehensive descriptions.' (van der Krogt, p,43) Many of the most beautiful and desirable maps available to the modern collector were printed and bound in Blaeu's atlases. Willem's son, Joan, would go on to add further volumes to the Atlas Novus, concurrently printing new editions of the first two volumes with additional maps, in effect making these new editions an entirely new book. Under Joan there would be nine Latin editions, twelve French, at least seven Dutch, and two German. This exceedingly successful work would be the mainstay of the Blaeu firm until 1661, at which point the work was supplanted by Joan Blaeu's masterwork Atlas Maior in 1662.