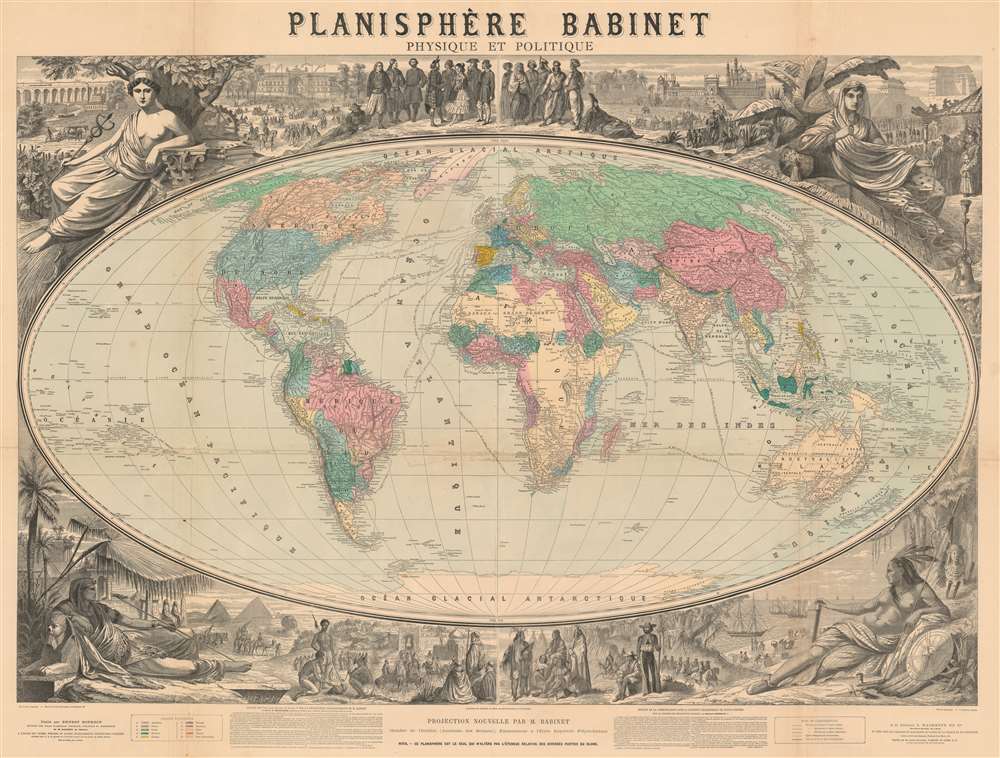 The first printed example of a Babinet / Mollweide Projection?

A stunning c. 1860 wall-sized map of the world on a Mollweide or Babinet Projection surrounded by elaborate allegorical imagery. Our research suggests this is one of the earliest, if not the earliest, published example of a Mollweide Projection. The map is centered on Europe and is, indeed, Eurocentric, with color coding intended to represent colonial claims around the world. Tracks at sea illustrate popular maritime routes across the Atlantic and to various points, around Africa, and to Australia, China, and the East Indies. Text at bottom center by Victor Adolphe Malte-Brun (1816 - 1889) and Hermann Berghaus (1828 - 1890), the preeminent geographers of the day, praise the usefulness and practicality of the Mollweide / Babinet projection.

This map is on a projection model originally devised in 1805 Karl (or Carl) Brandan Mollweide (1774–1825) of Leipzig. At its core, the Mollweide is an equal-area pseudocylindrical projection that takes an elliptical form at a 2:1 ratio. It was intended to supplement the Mercator Projection, which, while excellent for navigation, was impractical for other uses due to its exaggeration of land areas at high altitudes. Although the mathematics of the projection can be traced to Mollweide's 1805 paper, it is unclear if it was published as a map before Babinet's work in the 1860s.

Although the essential mathematics behind the projection date to Mollweide's work in 1805, it was Jacques Babinet who reinvented and popularized it in France starting around 1857. It is unclear to what extent Babinet was aware of Mollweide's work, but he presented the projection to the Paris Académie des Sciences in an 1857 paper, and his work was subsequently described as an 'independent derivation of Mollweide Projection.' Babinet, who called it a Homalographic Projection, revised and championed the Mollweide Projection in a number of practical applications - thus attaching his name to it.

The present map is the earliest example that we have identified of the Mollweide/Babinet Projection, published c. 1860. In 1861, a reduced version was published in the Atlas Universel de Geographie of E. Bourdin.

The map's most striking visual feature is the allegorical imagery filling the borders. In each corner, there is a female figure representing a continent: Europa (Greek) appears in the upper left, Asia (Persian) in the upper right, Africa (Egyptian) in the lower left, and America (Native American) in the lower right. At top center there appears an assortment of figures in traditional costumes. At bottom center left Persians or Arabians enter a desert city. At bottom center right Native Americans engage in trade with Europeans.

This map is undated, but we believe it to have been produced around 1860 and to be among the earliest printed examples of the Mollweide Projection. This is no simple work and many important French mapmakers and engravers took part in its production. The map was drafted by Georges Erhard Schièble on a projection designed and promoted by Jacques Babinet. The surround is the work of Firmin Gillot and Matin (unknown), and the lithographer Lèon Painlevé. Its publication is attributed to Ernest Bourdin and printing to Librairie L. Hachette.

The only other example we have seen was a mounted and varnished wall map format in exceedingly poor condition. The OCLC identifies two examples in instructional collections at the University of Chicago and at the State Library of New South Wales. The last example on the market sold at Sotheby's in 1999.

Ernest Bourdin (18?? - 18??) was a French publisher and printer active in the middle to late 19th century. His offices were located at 51 Rue e la Seine, Paris. Bourdin was a great supporter of the Mollweide / Babinet Projection and published an atlas using the system. His earliest publications date to the 1830s, with his latest work being in the late 1860s. Learn More...


Léon Louis Painlevé (May 22, 1832 - March 8, 1906) was a French engraver and architect active in Paris in the second half of the 19th century. He was born and died in Paris and is described as a lithographer of limited means. He is the father of Paul Prudent Painlevé (1863 - 1933), a noted scientist who became Prime Minister of France. Learn More...


Hachette and Company (fl. 1826 – present) was founded by Louis Hachette (1801 - 1864) in 1826 with the purchase of the Paris Bookshop Brédif. Shortly after acquiring the bookshop Louis Hachette began publishing Le Journal pour Tous, a successful general interest magazine. He also published a series of useful reference works which were sold through Paris in bookshops, train stations, and public offices. These included multiple maps and atlases geared toward the tourist visiting Paris for the first time. Louis Hachette himself died in 1864, but his empire continued to grow under the governance of his sons. Eventually the Hachette publishing firm came to dominate French publishing and attracted international interest. Via a series of mergers and acquisitions the firm eventually came under the control of Filipacchi Media and was rename Hachette-Filipacchi. Today the firm publishes books and magazines internationally. Learn More...