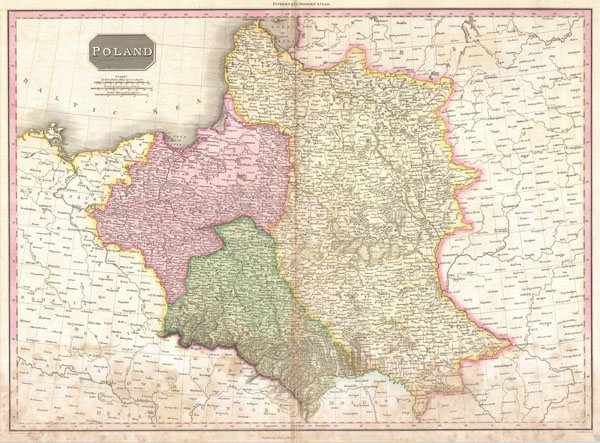 Pinkerton's extraordinary 1818 map of Poland. Depicts the Polish state following the Third Partition of 1795 and before it was reconstituted by Napoleon as the Duchy of Warsaw. Shows the state divided into three zones, East Prussia, Galicia, and Russian Poland or the region that once constituted the core of the Grand Duchy of Lithuania. Identifies cities, towns, castles, important battle sites, castles, swamps, mountains and river ways. Upper left hand quadrant features three scales, British Miles, French Leagues, and Polish Miles. Drawn by L. Herbert and engraved by Samuel Neele under the direction of John Pinkerton. This map comes from the scarce American edition of Pinkerton's Modern Atlas, published by Thomas Dobson & Co. of Philadelphia in 1818.