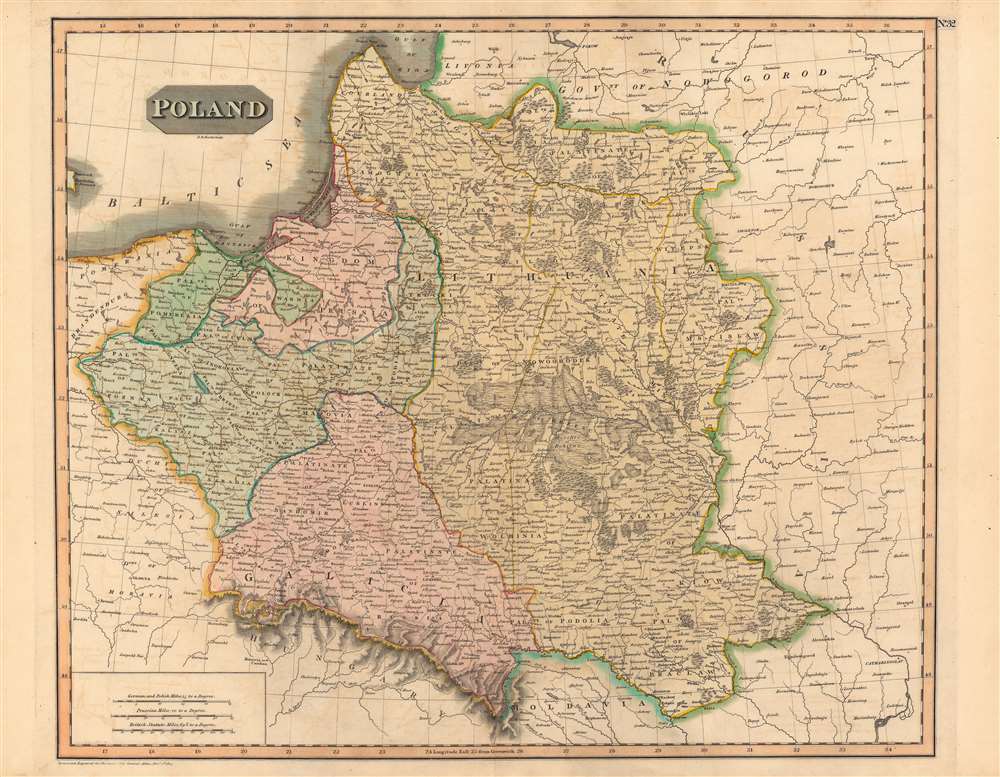 This is a fine example of John Thomson's 1814 map of Poland. It illustrates the lands of the former Polish-Lithuanian Commonwealth at the end of the Napoleonic Wars and on the cust of its partition betweem Russia, Prussia, and Austria.

The Polish-Lithuanian Commonwealth suffered at the hands of Russia, Prussia, and Austria in the 18th century when the three states conspired to reduce and then eliminate the commonwealth, a feat accomplished in 1795. But Polish nationalism had been enflamed by the American and French Revolutions, and the Napoleonic Wars offered an opportunity to recreate a Polish state. Following a popular uprising in 1806, Napoleon carved off a portion of Prussia to create the Duchy of Warsaw, which was established as a constitutional monarchy. However, the duchy was a French client state with limited autonomy, and was short lived in any case, having been occupied by Russia in 1813 following Napoleon's disastrous invasion of Russia the previous year.

After Napoleon's retreat, the Duchy of Warsaw effectively ceased to exist as the Russians fought against holdout forces and established a temporary military government. Soon after this map's publication, the 1815 Congress of Vienna determined the political fate of Poland. Russia demanded the whole lot given its outsize contribution to Napoleon's defeat, but the other European powers were aligned in opposition, with the issue becoming the most contentious of the entire congress.

In the end, a complicated arrangement effectively cut the Duchy of Warsaw in half between Russia and Prussia, which appears to have been anticipated by the color coding here (Galicia and surrounding areas shaded in pink had been annexed by Austria in 1772). Nominally, the new Prussian Duchy of Posen and Russian-ruled Kingdom of Poland maintained some autonomy and Kraków held 'free city' status, but in effect Poland ceased to exist, yet again, until 1918. With additional border changes in the 20th century, Poland 'shifted' considerably to the west; Warsaw, near left-center here is now in the eastern part of the country, while Brest, at center here, is no longer part of Poland at all but was at the western edge of the Soviet Union and now Belarus.

This map is a steel plate engraving prepared by John Thomson and engraved by Nathaniel Rogers Hewitt for inclusion in the November 1814 edition ofThomson's New General Atlas. It is very similar but not identical to a map in the David Rumsey Map Collection (List No. 0732.021) dated to July 1814, showing that Thomson published two editions of the map in a single year to keep up with the rapidly changing situation. This edition of the map is held by a handful of libraries in North America and Europe and is scarce to the market.