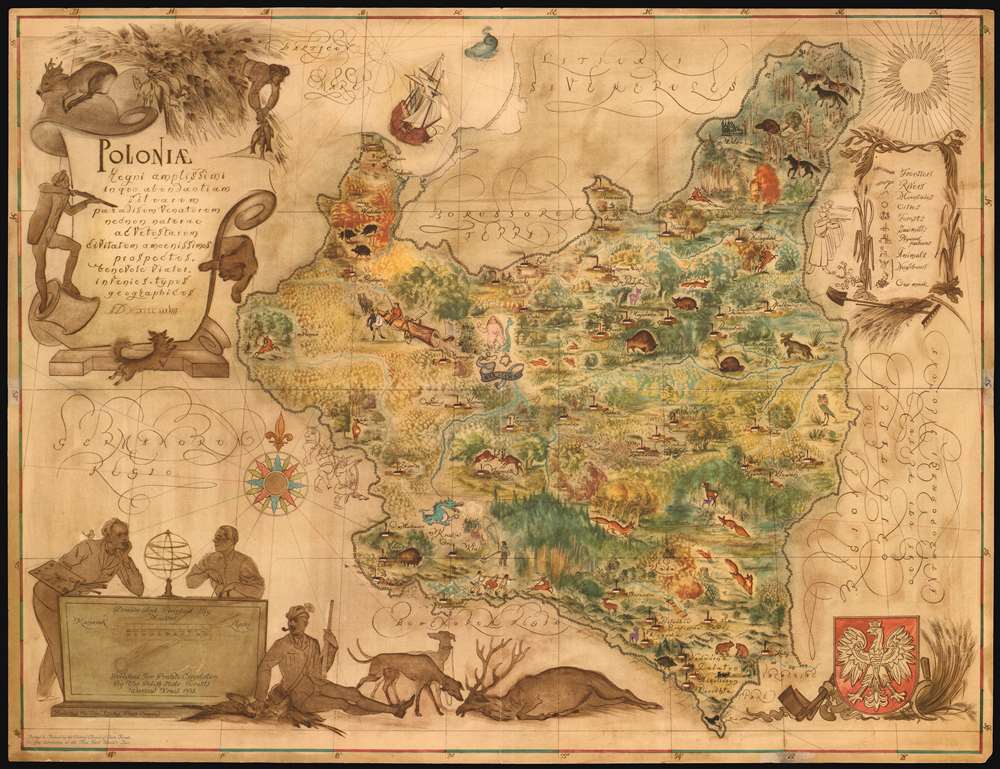 Published by the Polish government for distribution at the 1939 New York World's Fair.

An extremely rare find, this 1938 Eliasz Kanarek and Tadeusz Lipski pictorial nature map of Poland was created for the 1939 New York World Fair. Meant to be a handout for attendees, Kanarek and Lipski composed this beautiful work to celebrate Poland State Forests, and their flora and fauna. The not-so-kind illustrations of Germans and Soviets along the national borders, underscore Poland's precarious situation between aggressive powers.   German and Soviet delegations who felt they were insultingly depicted, complained and the map was censured.  Nonetheless, within four months of the World Fair's launch, the mapmaker's fears proved valid and Nazi Germany invaded Poland launching World War II.   Not all is serious, however. Some fantastical elements are included, among them a pink deer near Bialystok, a mermaid near Warsaw, and Krakow's fierce blue dragon. Both Kanarek and Lipski appear as well, discussing their work by a cartouche situated in the lower left corner.

At the World's Fair, most examples of this map were collected and put under censure following complaints by the German and Soviet delegations, who claimed they were unfairly represented. E.g. 'Huns' goose step along Poland's western border and raise their arms in a Nazi salute. Likewise, armed soldiers appear along the eastern border, referencing the threat of Soviet Russia.

The current state of affairs in Eastern Europe, while not blatantly referenced, was clearly on the cartographers' minds. Despite with volatile global diplomatic tensions, the New York World's Fair opened on schedule in 1939. On a stormy May 2, the Polish pavilion was dedicated and opened to the public the following day. Less than four months later, on September 1, 1939, Nazi Germany invaded Poland and effectively stranded all Polish workers and the fair exhibits in New York. A booklet distributed by the pavilion on September 1 read,

A brighter, more beautiful world is indicated than the one it is our destiny to inhabit today, where violence and force overrule right, where hatred has replaced love in mutual relations, where life becomes more difficult from day to day.

The fair closed for the season on October 31, and when it reopened in 1940, the Polish pavilion was left closed. Nearly all the artifacts presented at the fair were eventually sold to the Polish Museum of America in Chicago, with the exception of the murals, which are hanging at Le Moyne College in Syracuse, and the statue of King Jagiello, which stood in front of the pavilion. Today, the statue stands near 5th Avenue and 79th Street on the edge of Central Park's Great Lawn as a gift of the Polish government in exile. It is the only foreign monument from the World's Fair that remains in the city.

This map was drawn and painted by Eliasz Kanarek and Tadeusz Lipski, published by Polish Department of State Forests, and 'printed in Poland by the Central Board of State Forests for free distribution at the New York World's Fair. Known examples are part of the collections at the Library of the Forest Research Institute in Sekocin, the Polish army Museum in Warsaw, the City Museum in Zabrze, and in at least one private collection.

Eliasz Kanarek (June 21, 1902 - May 1969) was a Polish painter and noted portrait artist. Kanarek served in the Polish army from 1919 - 1920 and in 1923 began attending the Warsaw School of Fine Arts. Kanarak was a member of the Brotherhood of St. Łukasz and exhibited his work with this group. He worked as a cartoonist for the weekly 'Szpilki' from 1935 - 1938. He also participated in the Venetian Biennale in 1934 and exhibited his work at the Carnegie Institute in Pittsburgh in 1937. In 1938, he and six other members of the Brotherhood of St. Łukasz were commissioned to paint seven historical paintings to be displayed in the Polish pavilion at the New York World's Fair in 1939. In March 1939, Kanarak and another artist, Bolesław Cybis, sailed for New York with the paintings for the World's Fair. After the outbreak of World War II later that year, Kanarek remained in the United States in exile. Kanarek moved to Washington, D.C. and took up portrait painting, and among his subjects was General Marshall. The paintings also stayed in the United States and eventually went to Le Moyne College in Syracuse, New York. Kanarek became a naturalized American citizen on May 14, 1948 in Los Angeles, California, where he established a studio. Learn More...


Tadeusz Lipski (June 30, 1905 - April 7, 1987) was a Polish illustrator, painter, and graphic artist. He studied at the Graphic Arts Department of the Academy of Fine Arts in Warsaw. He found himself in France at the outbreak of World War II, and eventually made his way to England. After the war was over, he emigrated to the United States, and gained American citizenship on December 10, 1956. He lived in New York for years, where he exhibited his work in galleries. At some point he moved to Passaic, New Jersey, where he spent the rest of his life. Learn More...

Very good. Even overall toning. Text and illustrations on verso.
Looking for a high-resolution scan of this?