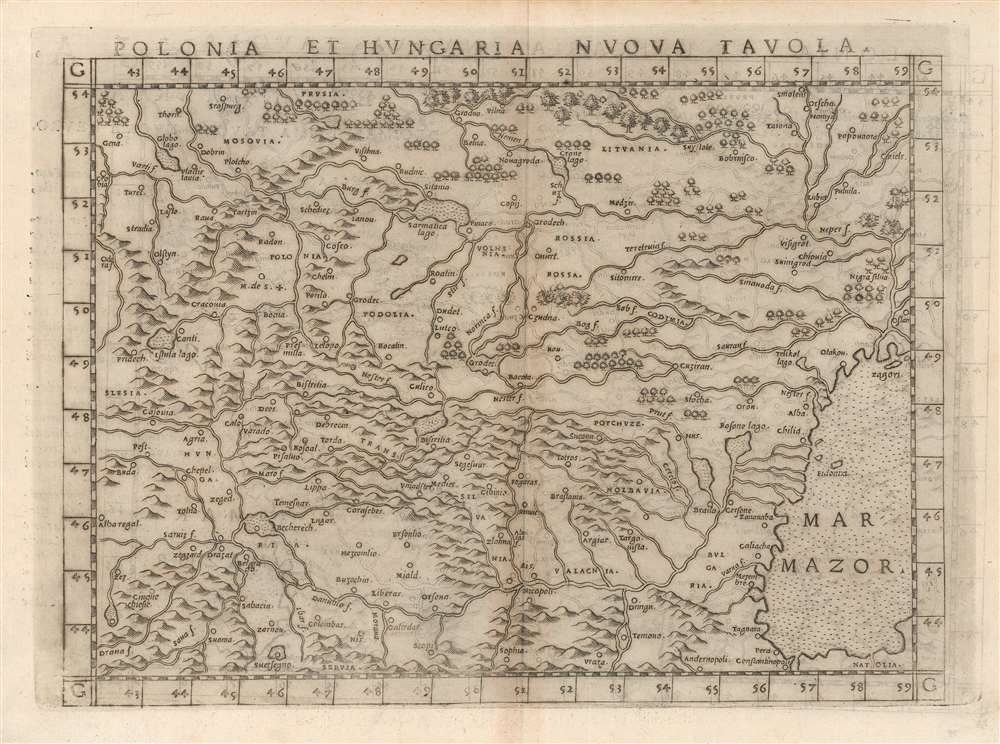 This is an attractive example of Girolamo Ruscelli's 1574 modern map of Poland and Hungary. An enlarged version of Giacomo Gastaldi's 1548 map representing what was the state-of-the-art of the mapping of Europe from the Danube to Lithuania, the map depicts as far east as the Black Sea (here named Mar Mazor. Gastaldi's map was a detailed copperplate improvement on Münster's 1540 woodcut map, and would not be improved upon significantly until Ortelius.

This map was engraved for the 1561 first Ruscelli edition of Claudius Ptolemy'sLa Geografia di Claudio Tolomeo. The maps of this edition were engraved two-to-a-plate, and consequently the platemark ran off the edge of the sheet at top. Later editions saw the plates having been cut, exhibiting a platemark all the way around, as is the case here. The typesetting of the Italian verso text of this example corresponds with that of the 1574 edition of La Geografia. Ruscelli's Ptolemy is well represented in institutional collections. This separate map is cataloged only twice, by the National Library of Poland and the British Library. It does appear on the market.


Sebastian Münster (January 20, 1488 - May 26, 1552), was a German cartographer, cosmographer, Hebrew scholar and humanist. He was born at Ingelheim near Mainz, the son of Andreas Munster. He completed his studies at the Eberhard-Karls-Universität Tübingen in 1518, after which he was appointed to the University of Basel in 1527. As Professor of Hebrew, he edited the Hebrew Bible, accompanied by a Latin translation. In 1540 he published a Latin edition of Ptolemy's Geographia, which presented the ancient cartographer's 2nd century geographical data supplemented systematically with maps of the modern world. This was followed by what can be considered his principal work, the Cosmographia. First issued in 1544, this was the earliest German description of the modern world. It would become the go-to book for any literate layperson who wished to know about anywhere that was further than a day's journey from home. In preparation for his work on Cosmographia, Münster reached out to humanists around Europe and especially within the Holy Roman Empire, enlisting colleagues to provide him with up-to-date maps and views of their countries and cities, with the result that the book contains a disproportionate number of maps providing the first modern depictions of the areas they depict. Münster, as a religious man, was not producing a travel guide. Just as his work in ancient languages was intended to provide his students with as direct a connection as possible to scriptural revelation, his object in producing Cosmographia was to provide the reader with a description of all of creation: a further means of gaining revelation. The book, unsurprisingly, proved popular and was reissued in numerous editions and languages including Latin, French, Italian, and Czech. The last German edition was published in 1628, long after Münster's death of the plague in 1552. Cosmographia was one of the most successful and popular books of the 16th century, passing through 24 editions between 1544 and 1628. This success was due in part to its fascinating woodcuts (some by Hans Holbein the Younger, Urs Graf, Hans Rudolph Manuel Deutsch, and David Kandel). Münster's work was highly influential in reviving classical geography in 16th century Europe, and providing the intellectual foundations for the production of later compilations of cartographic work, such as Ortelius' Theatrum Orbis Terrarum Münster's output includes a small format 1536 map of Europe; the 1532 Grynaeus map of the world is also attributed to him. His non-geographical output includes Dictionarium trilingue in Latin, Greek, and Hebrew, and his 1537 Hebrew Gospel of Matthew. Most of Munster's work was published by his stepson, Heinrich Petri (Henricus Petrus), and his son Sebastian Henric Petri. Learn More...