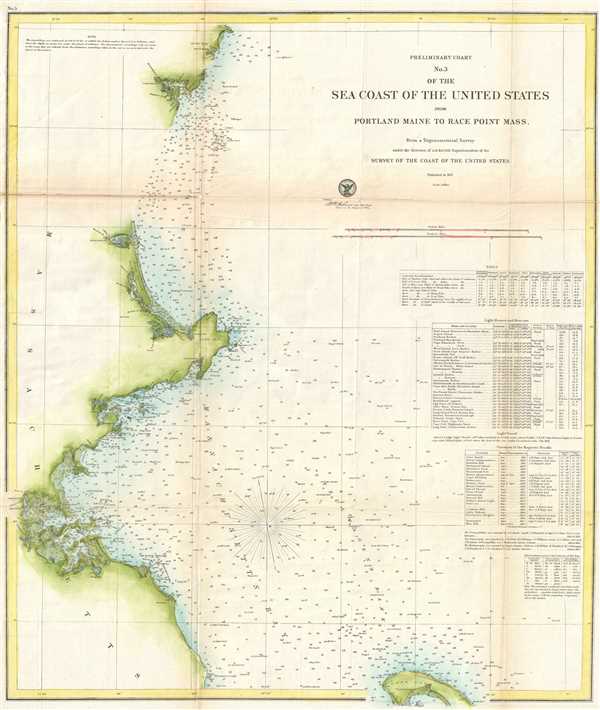 This is an 1857 U.S. Coast Survey map or nautical chart of a northern section of the east coast of the United States. The map depicts from just north of Portsmouth, Maine to Dorchester, Massachusetts and from the coast out into Massachusetts Bay and the Atlantic Ocean. The Boon Island Lighthouse is depicted off the coast of Maine. Several other coastal cities and landmarks are illustrated, including Newburyport, Cape Ann, Gloucester, Salem, and Boston. The northernmost reaches of Cape Cod are included along the bottom border and Provincetown and the Race Point Lighthouse are labeled. Depth soundings are recorded all along the coast, with the occasional island noted as well. Plum Sound and the Piscataqua, Merrimac, and Charles rivers are all depicted. Tables with information concerning tides, lighthouses and beacons, magnetic needle variations, and abbreviations used on the map are included along the left side.

This map was prepared for inclusion in the Report of the Superintendant of the U.S. Coast Survey, in 1857.

Very good. Wear along original fold lines. Backed on archival tissue for stability. Blank on verso. A pea sized spot to the cartouche with other related spots.
Looking for a high-resolution scan of this?