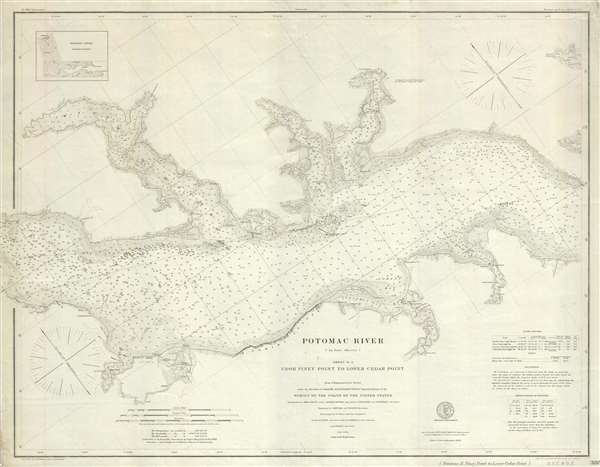 A highly detailed chart of part of the Potomac River.
$375.00

This is an 1877 U.S. Coast Survey nautical chart or maritime map of a section of the Potomac River. The map depicts the region from Lower Cedar Point to Piney Point and from Leonardtown, Maryland to Wakefield, Virginia. Highly detailed, myriad depth soundings, measured in feet, are present throughout. The Wicomico River, St. Clement Bay, and Breton's Bay in Maryland and Nomini Bay, Currioman Bay, and Mattox Creek in Virginia are all illustrated and labeled. Numerous points, beaches, creeks, and individual homesteads are also illustrated. Information concerning lighthouses, tides, depth soundings, and certain notations used on the map are situated in the lower right corner.