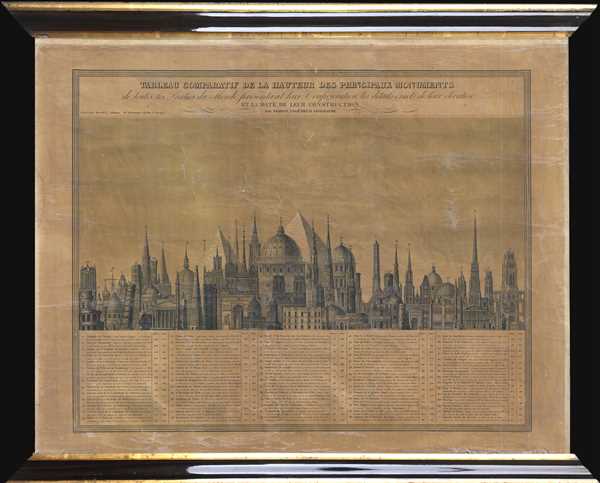 This is a separate issue c.1840 Aristide Michel Perrot comparative chart of the heights of the monuments of the world. The chart depicts 71 different numerically identified monuments located throughout the world, although the majority are in Europe, and the majority of those are located in France. A table, situated in the bottom quarter of the chart, bears the name, location, height (in both meters and feet), and a small note about each of the 71 monuments. The monuments represented include the Pyramids at Giza (numbers 1 and 4), numerous bell towers of churches and cathedrals throughout Europe, such as those at Vienna (3), Rouen (9), Chartres (10 and 13), Hamburg (12), and Reims (23), Westminster in London (28), Notre-Dame de Paris (33), and the Arc de Triomphe (49) to name only a few. Each of the monuments is depicted in profile, allowing for easy recognition of each of them.

Good. Mounted as a wall map. Varnished over. Varnish exhibits moderate degradation. Some whitening. Slightly shinier than map appears in image. Could be removed by professional restorer. Closed tear professionally repaired on verso. Blank on verso.