1818 Pinkerton Map of Prussia and its Dominions 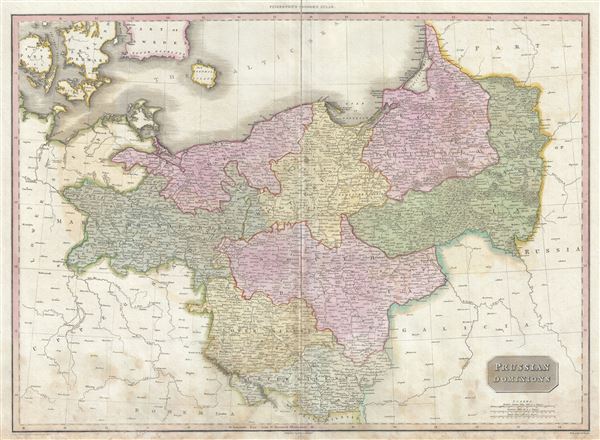 1818 Pinkerton Map of Prussia and its Dominions

A scarce, beautiful, and exceptionally interesting example of John Pinkerton's stunning 1810 map of Prussia. The Map covers from the Baltic Sea to Upper Silesia and from Lower Saxony to Russia, including parts of modern day Poland.

In 1815 Prussia emerged from the Napoleonic Wars and the Congress of Vienna as the dominant Germanic power. Its new borders included much of the Kingdom of Saxony, Rhineland, and Poland. In subsequent years Prussia would take a leading role in governing the German Confederation. The German Confederation, created in 1814, acted as a buffer zone between Austria and Prussia, its two largest and most powerful member states. Nonetheless the rivalry between the two powerful states would increase until the break out of the Austro-Prussian War in 1866. Prussia would win the Austro-Prussian War, which would ultimately lead to the collapse of the German Confederation. A few years later, in 1871, most of the former Confederation states were folded into the newly proclaimed German Empire.

Pinkerton, J., A Modern Atlas, from the Lates and Best Authorities, Exhibiting the Various Divisions of the World with its chief Empires, Kingdoms, and States; in Sixty Maps, carefully reduced from the Larges and Most Authentic Sources, (Philadelphia) 1818, Thomas Dobson Edition.