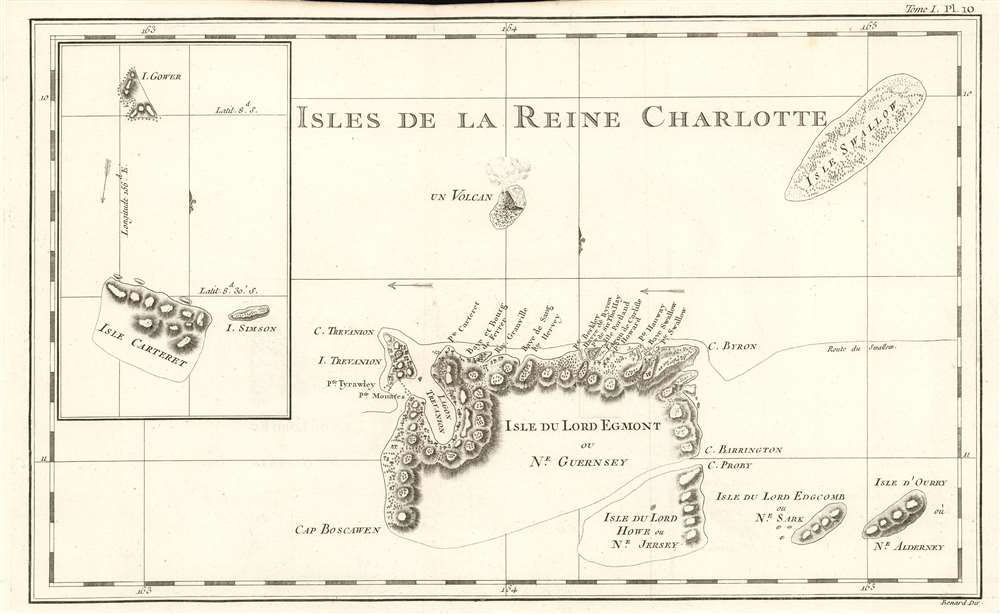 The Solomon Islands, Rediscovered and Renamed by Carteret
$200.00

This is a 1774 map of the Solomon Islands, renamed by Carteret after his 'rediscovery' of the islands during his calamitous 1767 journey around the world. The map is beautifully engraved, with topography shown pictorially, and showning predominant winds. The map shows the track of HMS Swallow through the islands; there is a volcanic island shown centrally - this is Tinakula island, an island stratovolcano which last erupted in 2012 and whose earliest recorded eruption dates to the Álvaro de Mendaña expediion of 1595 .

Commanding the less-than-stellar HMS Swallow during what appears to have been a miserable circumnavigation, Carteret had left Pitcairn Island and was sailing northwest across the Pacific. No doubt he wished he had not left Britain:

The scurvy still continued to make great progress among us, and those hands that were not rendered useless by disease, were worn down by excessive labour; our vessel, which at best was a dull sailer, had been long in so bad a condition that she would not work; and on the 10th [August 1767], to render our condition still more distressful and alarming, she sprung a leak in the bows, which being under water it was impossible to get at while we were at sea. Such was our situation, when on the 12th, at break of day, we discovered land: the sudden transport of hope and joy which this inspired can perhaps be equalled only by that which a criminal feels who hears the cry of a reprieve at the place of execution. The land proved to be a cluster of islands, of which I counted seven, and believe there were many more. [Hawkesworth, vol. 1, p. 568]

Carteret named this cluster of islands 'Queen Charlotte's Islands', and thus they are named on the present map: these would prove to be the same islands encountered in 1568 by Alvaro de Mendaña de Neira. As with de Neira, Carteret's crew were not received happily by the Solomon Islanders and they were unable to stay. Carteret, who was confined to his cabin by illness for this whole stretch of the voyage, was not even able to set foot ashore. Carteret's afflictions included a long-standing dearth of patronage, so it is not surprising to see his efforts to flatter Lords Egmont, Edgcomb and so forth by naming islands after them. That said, he appears to have named many island features after current and former crew members, and even the 'dull sailing' Swallow was counted worthy of naming one of the archipelago's islands.

Following Swallow's abortive visit to the Solomons, she sailed west-north-west to reach a further archipelago, the Carteret islands. Carteret and his crew were the first Europeans to visit these islands, which Carteret duly named. These include Gower and Simson Islands - named after Swallow's Ship's Master, Simpson, and Lieutenant Erasmus Gower (the only officer healthy enough to actually navigate during most of the Pacific voyage.)

This map was engraved by Robert Bénard for the 1774 French edition of James Hawkesworth's Relation des voyages entrepris par ordre de Sa Majeste britannique actuellement regnante, an account of Cook's voyages. The separate engraving appears to be neglected by institutional collections, appearing only in the National Library of Australia. The full text is well represented in institutional collections.