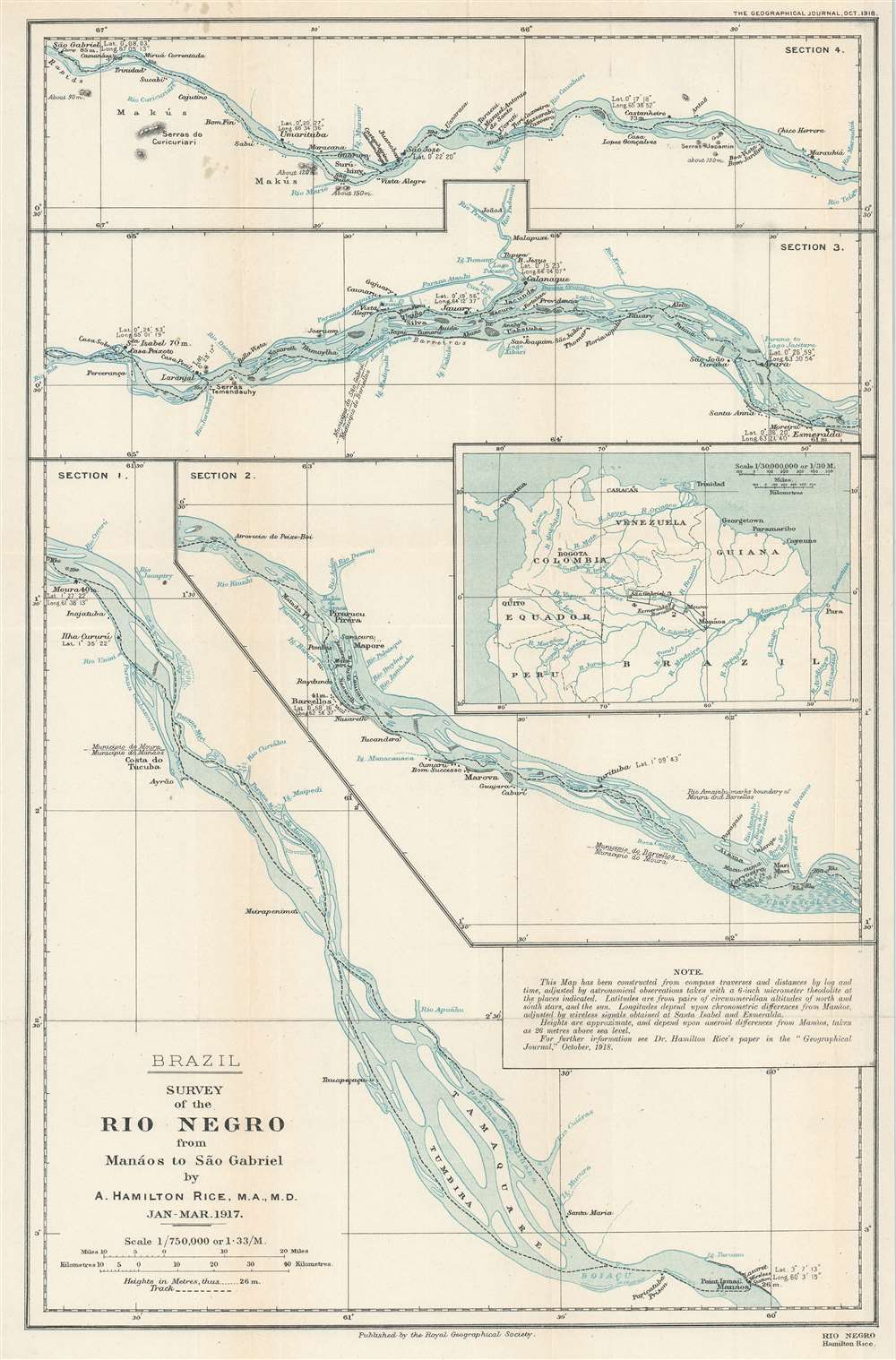 The first scientific mapping of the Rio Negro in Brazil!
$300.00

This is a 1918 Alexander Hamilton Rice Jr. map of the Rio Negro in Brazil and is the first scientific map of the Rio Negro - the largest blackwater river in the world. Rice's map divides the river into four sections and depicts from Manaos (Manaus) to Sao Gabriel. A stated goal of Rice's 1917 expedition to the region was to map the river, which despite its immensity and significants, was at the time, almost unknown. Sao Gabriel and Manaos are both labeled, as are numerous villages and other settlements along the river's banks. Numerous islands within the river are illustrated, as are tributaries (all of which are labeled). Latitude and longitude references are provided in many locations, and a short paragraph to the right of center states that the map was 'constructed from compass traverses and distances by log and time, adjusted by astronomical observations taken with a 6-inch micrometer theodolite at the places indicated'. An inset detailing northern South America and situating the four sections of the Rio Negro presented here is situated along the right border.

This map was created by Alexander Hamilton Rice and published in the October 1918 edition of The Geographical Journal by the Royal Geographical Society. Three examples are cataloged in OCLC and are part of the institutional collections at the University of Cambridge, The British Library, and the Bibliothèque nationale de France.

Alexander Hamilton Rice Jr. (August 29, 1875 - July 21, 1956) was an American explorer, geographer, geologist, and physician remembered for his Amazon Basin expeditions. Rice earned an A.B. from Harvard in 1898 and an M.D. from Harvard Medical School in 1904. He volunteered for the Ambulance Américain, a group of American civilian doctors serving in Europe before the United States entered World War 1, on its Paris surgical staff in 1914 - 1915. He then became director of Hôpital 72, Société de Secours aux Blessés Militaires, a French charity hospital in Paris, from 1915 - 1917. In 1917, after the U.S. entered the war, Rice was commissioned as a lieutenant in the U.S. Naval Reserve and directed the 2nd Naval District Training School for Reserve Officers in Newport, Rhode Island, until 1919. As an explorer and geographer, Rice specialized in rivers. Beginning in 1907, Rice set out on seven expedition and explored 500,000 square miles of the Amazon Basin and mapped many previously unmapped rivers in the northwestern portion of the Basin. On his 1924 - 1925 expedition, Rice became the first to use aerial photography and shortwave radio in mapping. Over the course of his career, Rice published four articles in The Geographical Journal and was closely associated with the Royal Geographical Society. Rice founded Harvard's Institute of Geographical Exploration in 1929, which he directed until it closed in 1952. He also held positions as a Lecturer in Diseases of Tropical South America at the Harvard Medical School, was the Curator of the South American Section of the Peabody Museum of Archaeology and Ethnology, and served as a Trustee of the American Museum of Natural History. Rice married Eleanor Elkins Widener, a widowed RMS Titanic survivor, in 1915, and she accompanied him on several of his expeditions. Learn More...