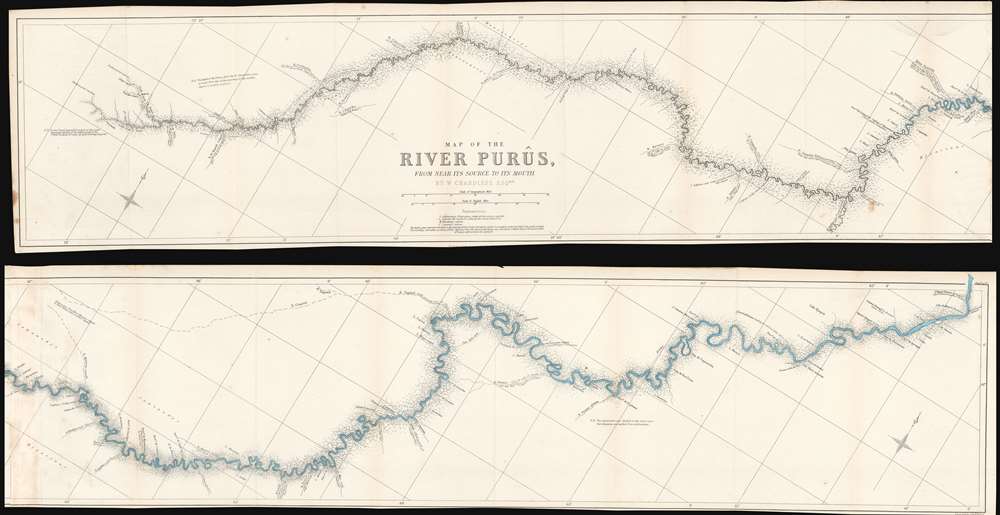 This is landmark 1866 William Chandless map of the Purûs River in Brazil and Peri is he first accurate map of the river's 1,866-mile course. Chandless took measurements throughout his expedition, covering both the ascent and the descent of the river. He identifies tributaries, islands, and Indian villages, and includes a handful of comments concerning the river's depth and width. In the appendix to his article on the expedition, Chandless addresses the creation of the map:

This has been made from bearings and distances taken throughout the whole river, and from observations with sextant and artificial horizon (mercurial). Observations of latitude were taken at 79 points, and time observations for longitude by chronometer at about three-fourths of them. So far as was possible, time observations were repeated at the principal points on the down voyage, so as to be dependent on chronometer for a few days only.

Even today the Purûs River basis is considered on of the most remote, biodiverse, and inaccessible parts of the Amazon Rainforest. In 2008, a previously unknown pre-Columbian civilization was discovered in the upper region of the river close to the Bolivian border. After much of the forest in the region was cleared for agricultural use, satellite pictures revealed the remains of large geometric earthworks.

This map was created by William Chandless, engraved by Edward Weller, and published by John Murray in the 1866 edition of The Journal of the Royal Geographical Society. We note a single example cataloged in OCLC and as part of the collections at the Bibliothèque nationale de France.

William Chandless (November 7, 1829 - May 5, 1896) was an English explorer. Chandless graduated from Trinity College, Cambridge, with high honors, and then studied law for two years before realizing that the law wasn't for him. In 1854, Chandless was in the United States along the Missouri River watching Mormons travel west to Utah by covered wagon. Since he was barred from joining them, Chandless hired a 'teamster' at $25 a month. He chronicled this journey in a landmark travel narrative A visit to Salt Lake, and a Residence in the Mormon Settlements of Utah. After leaving Salt Lake, he continued west to Los Angeles and San Francisco. From San Francisco he traveled to Acapulco. He then crossed Mexico and returned to England. Chandless first left for Brazil in 1858, but did not stay long as he was in Argentina the following year during the great earthquakes in Mendoza. From there he crossed the Andes to Chile, and from Valparaiso he continued on to Peru and Ecuador. He traveled from Ecuador to Colombia in 1861, and was detained several times by different factions vying for control of Colombia. Chandless took up residence in Manaus, Brazil, soon afterward, and lived there for years. He based numerous explorations of the southern tributaries of the Amazon River from Manaus, including an ascension of the 1,866-mile course of the Purus River, for which the Royal Geographical Society awarded him its Patron's Medal. Chandless contacted a number of indigenous tribes and explored several of the Amazon River's southern tributaries. In 1867, Chandless recorded a few words of Arawá, an extinct language for which the Arauan language group is named. Without this list compiled by Chandless, all record of this language would have been lost. In 1868, Chandless accomplished a thorough survey of the Juruá River, ascending its 1,133-mile course. Over the course of his years in the Amazon, Chandless surveyed over 5,000 miles of main streams and branches of the Amazon River. Learn More...