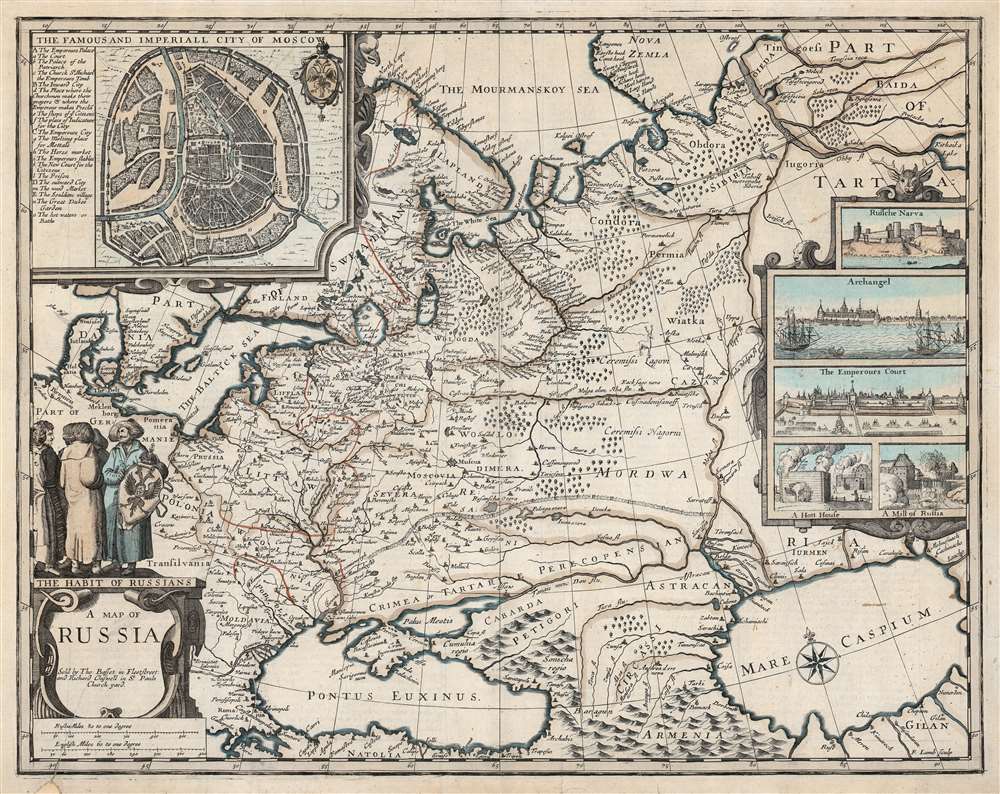 This is John Speed's scarce 1676 map of Russia, one of the first English maps of Russia and certainly the most decorative. The map is scarce, having appeared only in the latter, Basset and Chiswell edition of the Speed atlas. Centered on Moscow, the map covers from the North Sea to the Caspian Sea and from Nova Zembla to Trabzon (Black Sea south coast). There is a large and impressive inset map of Moscow: this is centered on the Kremlin, Belygorod, and the Kityagorod. Five inset views depict the Emperor's Court in the Kremlin, the vital port of Archangel, the Russian fort at Narva (in modern Estonia and a crucial stronghold on Russia’s western border), bathhouses and a mill. Above the cartouche are figures dressed in 'The Habit of Russians,' one of whom carries the Russian coat of arms.

This is one of a handful of maps engraved by Francis Lamb, and added to the atlas to make it more up to date and competitive with the Dutch atlases. Lamb assiduously copied Hessel Gerritsz's Tabula Russiae, which itself was attributed to Fyodor II Borisovich Godunov (1589 - 1605), a precocious young Tzar who ruled Russia from 1598 - 1605, when he was murdered by agents of False Dimitriy I. The well-educated young monarch produced manuscript maps of Russia and Moscow which survive in the Russian national archives. Godunov’s manuscript maps were brought to Amsterdam by Isaac Abrahamszoon Massa (1586 - 1643), a Dutch merchant and diplomat considered to have been the first western 'Kremlinologist.' Gerritsz obtained the Godunov maps from Massa, and compiled them into the original plates for his own map in 1613. After Gerritsz's death that plate came into the hands of Willem Janzoon Blaeu, whose family included it in Neuer Atlas. It is probably the Blaeu version which provided Lamb's model. The only earlier English map of Russia, printed by Richard Blome in 1669 and also engraved by Lamb, is a smaller and exceedingly Spartan copy of a map by Nicolas Sanson.

The map illustrates Russia as it appeared during the Time of Troubles (1598 - 1613), a period of political and social upheaval during the interregnum between the Czars of the Rurik Dynasty and the ascendency of the Romanovs. The period included the rise and fall of the 'False Dmitriys', pretenders claiming to be the heirs of the Rurik Dynasty. During this period Russia suffered from infighting, foreign invasion, and famine. It is estimated that nearly 1/3 of the population died.

Despite having ended in the early seventeenth century, the Time of Troubles has long been held as justification for Russia's support of strong, autocratic leadership. In 1613, Tsar Mikhail Romanov instituted a holiday named Day of Moscow’s Liberation from Polish Invaders - that is, Unity Day. This was celebrated throughout the Czarist era until 1917, when it was replaced with a commemoration of the Russian Revolution. Tellingly, Unity Day was reinstated in 2005 by president Vladimir Putin in 2005.

This map was engraved by Francis Lamb for inclusion in the 1676 Basset and Chiswell The Theatre of the Empire of Great-Britain, which combined both of John Speed's atlases in a single volume. As a separate map, this is scarce in institutional collections with only four listings in OCLC. A dozen examples of the Theatre are listed.


Francis Lamb (fl. 1667 - 1701) was an English engraver and mapmaker active in London during the second half of the 17th century. Working as an engraver Lamb produced a number of highly influential maps including four plates of the New World for inclusion in the 1676 Basset and Chiswell edition of Speed's "Prospect of the most famous parts of the world". He worked in conjunction many of the most prominent English map publishers of the 17th century including Richard Blome, John Seller, John Ogilby, Robert Morden, William Berry, Moses Pitt, Philip Lea, among others. Little is known of Lamb's personal life however he seems to have been a pupil of the British polymath Robert Hooke, who mentions him regularly in his journals. The dates of Lamb's birth and death are unknown, there is some speculation that he may have died around 1717. Baynton-Williams quotes abundantly with respect to Lamb from Hooke's diary, and the picture is of an exceedingly busy man with connections to many of the best geographical minds of his day. The novel maps he supplied for the 1676 edition of the Speed atlas may well have benefited even more from these connections than from his skill as an engraver. Learn More...

Very good. One surface mend to lower left, visible in scales and cartouche. Else near excellent, with attractive old color.