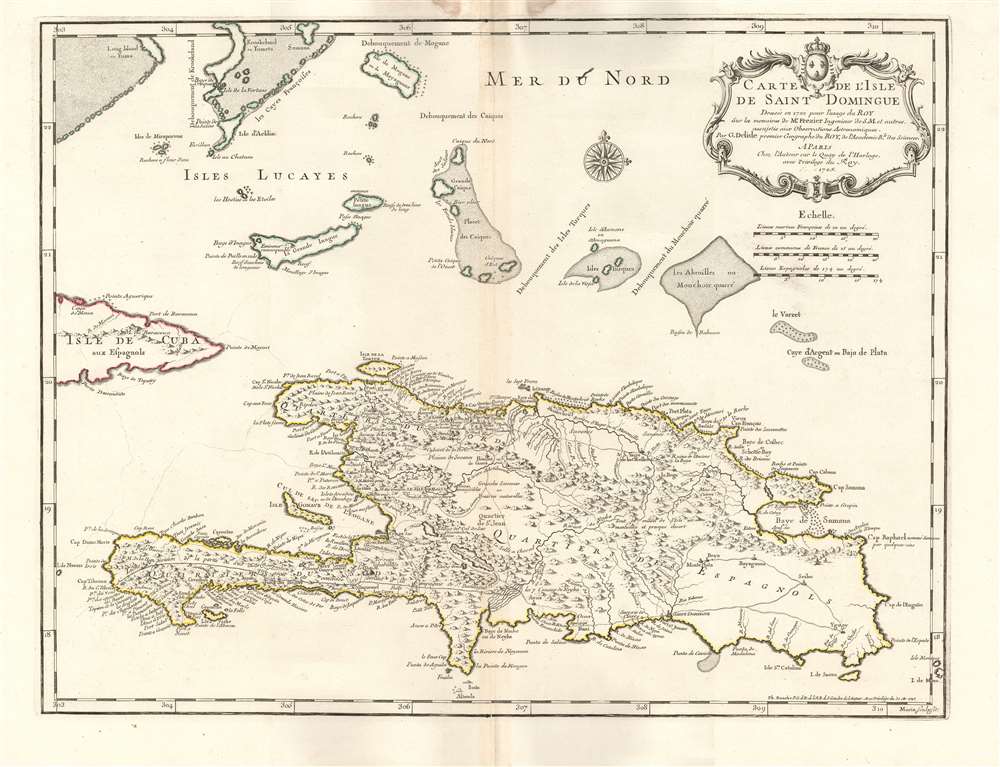 This is a 1745 Phillipe Buache edition of Guillaume De l'Isle's beautifully engraved 1725 map of the island of Hispaniola or Saint Domingue, modern-day Haiti and the Dominican Republic. It is considered one of the best and most detailed maps of the island if its generation.

It is based on, but not a rote copy of, Amédée-Françis Frézier's 1722 Isle de S. Domingue et débouquemens circonvoisins. As such, it is one of the best-informed maps of the island available. Frézier was sent to Saint Domingue in 1719 to oversee the fortification of the French Colony, and during the course of these labors he also produced his 1722 map. Even so, the map's topographical features are largely rendered pictorially. Lakes, rivers, and towns are marked and named, including Santo Domingo and Port-au-Prince. The map includes descriptive notations to flesh out these details: 'toute ce milieu de l'isle est montueux et presque desert,' for example. (All this central part of the island is mountainous and nearly deserted.)

In the central part of the island is the town of Hincha. This village, founded by Spanish settlers in 1704, was economically significant beyond its small size: it was a cattle town able to capitalize on selling beef to the neighboring French colony where it was more than seven times as expensive than in the Spanish quarters of the island.

The map illustrates the Baye de Samana, now known as a winter mating ground for humpback whales. Partially enclosing the bay, to the north, is the Cap de Samaná: an important instance of this peninsula being correctly depicted as an island (albeit with a lake and two streams making this depiction ambiguous.) It is odd that the erroneous insular Samana would appear almost entirely in French cartography subsequent to the De l'Isle: D'Anville, Bellin and Vaugondy all perpetuate the canard.

De l'Isle's map diverges sharply from Frézier's in its depiction of the Bahamas. Placenames, topology, and the shallows differ sharply. The version of these islands that appeared on Frézier's 1722 map would be closely copied by D'Anville and Vaugondy, among others. De l'Isle appears to be relying on a different model - his depiction of the Turcs, Caicos, and Bahamas do not resemble even De l'Isle's own earlier printed maps. Between Acklins Island and Samana Cay is a string of islands named 'Les Cayes Françoises' which make no such appearance on the Frézier.

This map was engraved for inclusion with De l'Isle's atlases in 1725. This does not aid us in the census, as his atlases were made-to-order with varying content, and did not include printed title pages. His student, Philippe Buache, took over the firm in partnership with De l'Isle's widow, and it is his imprint (with the date of 1745) that appears here. There are four versions of this map that appear in Tooley: the 1725 first state, Buache's second state of 1745, and the 1780 Dezauche third state. The 1730 Covens and Mortier edition is a different engraving. These are well represented in institutional collections.


Amédée-François Frézier (1682 - October 26, 1773) was a French military engineer, mathematician, spy, and explorer. He was born in Savoy to a professor and lawyer. He was sent to be educated in Paris, where he studied science and theology, and wrote his thesis on Astronomy and Navigation. He went on to study art and architecture in Italy with particular attention to fortifications. On his return to France in 1700 he was commissioned to the military: by 1712 he had risen to a lieutenant-colonelcy of Army Intelligence, and was sent to South America - in the guise of a merchant captain - to study defense fortifications, ports, and the coastal charts of Spanish Colonial Chile and Peru. The journey would result in the production of more than a dozen maps. In addition to his espionage work, he reported on the flora and fauna and produce of the regions he visited - bringing back to Europe specimens of native American strawberry, his namesake fruit. He would travel again in 1719, assigned as Engineer-in-Chief to Santo Domingo and tasked with the fortification of the colony; to this end he produced a map of the island and a plan of Santo Domingo. He returned to Europe, was rewarded for his labors, and went on to design fortifications in Philippsburg and Landau. In 1739, he was made Director of Fortifications for Brittany. Learn More...

Very good. Some reinstatement of margin at top, not affecting printed image. Else excellent condition with original outline color.