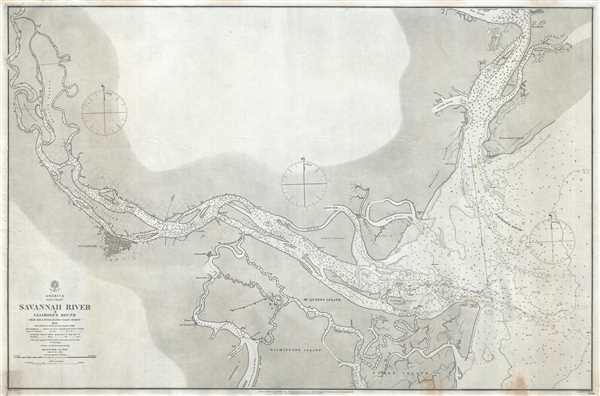 A beautiful and extremely scarce 1861 British Admiralty Hydrographic Office maritime map or nautical chart detailing the Savannah River and Calibogue Sound, Georgia. Centered , the Savannah River, this map covers the Calibogue Sound coast from Hilton Head Island to Tybee Island with extensive detail along the inland course of the Savannah River as far as Argyle Island. They city of Savannah is featured prominently on the Savanah River just west of center. The city itself is rendered in considerable detail with individual streets identifiable.

This chart hails from an era when the British Admiralty produced the finest nautical charts in the world. The present is derived from U.S. Coast Survey work in the Savannah River region dating to 1855 with updates form the 1861 survey. Captain Washington, of the British Admiralty, further updated the chart to 1866, with minor revisions to 1873. This chart is very rare, with no other examples identifiable.