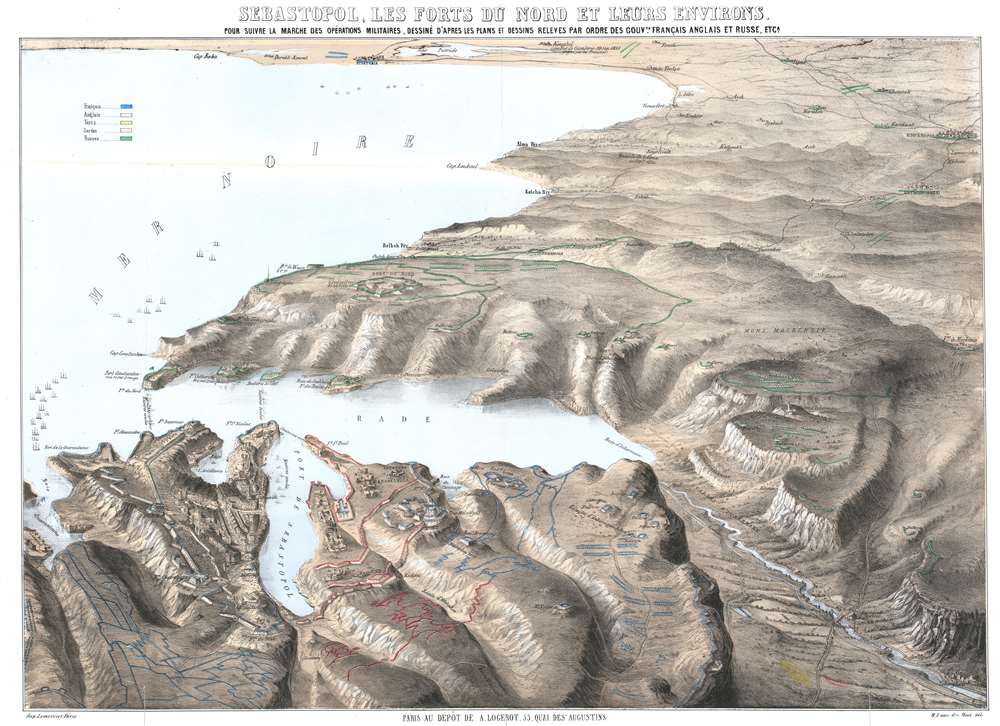 One of the classic sieges in all of history and survived by Leo Tolstoy.
$1,200.00

This is a c. 1855 Auguste Logerot bird's-eye view map of the siege of Sevastopol (Sebastopol) during the Crimean War. Sevastopol, the largest city on the Crimean Peninsula, occupies the foreground and is illustrated in detail. Numerous forts, redoubts, and other fortifications are identified, along with artillery batteries and even a few lighthouses. Russian, British, French, and Ottoman troop positions are colored. The Battle of Inkermann and the fighting at Koughil are directly referenced on the view.

The Siege of Sevastopol

The siege of Sebastopol, the final battle of the Crimean War, took place from October 1854 until September 1855. Sevastopol is remembered as one of the classic sieges of all time. The city housed Russia's Black Sea Fleet, which posed a threat to the entire Mediterranean Sea. The siege was immortalized in Leo Tolstoy's Sebastopol Sketches. Tolstoy, the now world-famous author of works including War and Peace and Anna Karenina, was a 26-year-old artillery officer in the Russian army and survived the 11-month siege.

Hostilities erupted in July 1853 when Russia invaded two Ottoman suzerainties known collectively as the Danubian Principalities. The Ottomans immediately responded and fought a defensive campaign that eventually halted the Russian advance at Silistra, which the Russians besieged. Alarmed by the possibility of an Ottoman collapse, the British and French jumped to their aid, sending troops and supplies to Gallipoli. These reinforcements did not arrive at Silistra until after the Russians had withdrawn.

Now, public opinion at home, where discontent at the seemingly wasted effort and expense of sending armies to the Balkans, exerted an influence on the alliance. This outcry led to the planning and execution of an invasion of the Crimean Peninsula in September and a siege of the Russian naval port of Sevastopol, their primary naval base in the Black Sea, which lasted for eleven months. Russia finally sued for peace in March 1856. In the Treaty of Paris that ended the war, Russia lost its Black Sea ports. Wallachia and Moldavia gained a modicum of independence, and Christians in the Holy Land were given a degree of equality.

This view was published c. 1855 by Auguste Logerot. It was drawn by H.J. van den Hout and engraved and printed by Rose Joseph Lemercier. An empty OCLC reference appears for this work, suggesting that an institution that was once part of OCLC cataloged it at one point.