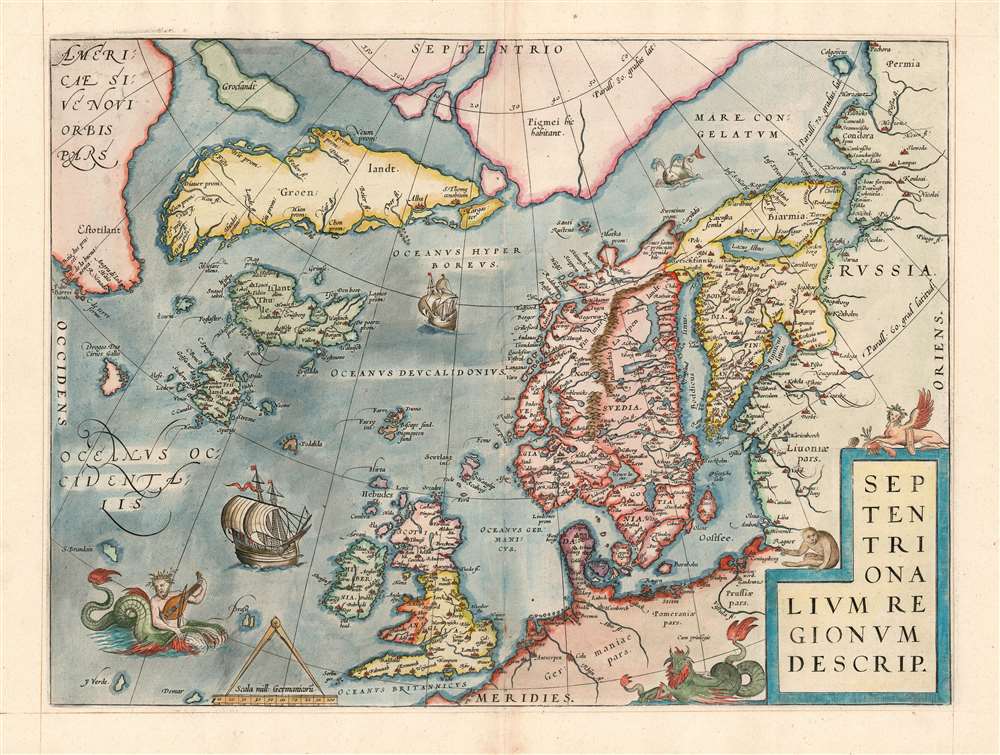 North Part of the World Known to Europe in the Age of Discovery.

One of Abraham Ortelius' most interesting maps, this is his 1570 map of the Arctic, here in a transitional example between the first and second states as recorded in van den Broecke. The map covers the northern regions from the English Channel to the just south of the North Pole and from America to Russia, including England, Scandinavia, Finland, Denmark, Iceland, and Greenland, as well as parts of America (Estotiland), the apocryphal island of Friesland, and Mercator's speculative Arctic islands.

Part of Ortelius' genius was his aptitude as a compiler and editor, synthesizing the best sources that he could locate. For this map, these included the 1539 Olaus Magnus Carta marina et Descriptio Septentrionalium Terrarium for Scandinavia and Iceland; Nicolo Zeno's 1561 Septentrionalium Partium Nova Tabula for Estotiland, Iceland, Greenland, Icaria, and Frisland; Anthony Jenkinson's 1562 map of Russia, and Gerard Mercator's world maps of 1564 and 1569 for the high Arctic.

This is one of the few maps to depict Estotiland and Droegeo, both drawn from the narrative of the Zeno brothers, supposedly written in the 14th century, before Columbus, but actually published in 1561 as a deliberate fraud by the Venetian merchant and statesman Nicolo Zeno. Most subsequent cartographers associated Estotiland with Labrador based upon Zeno's description,

Also prominent on this map are Zeno's imaginary islands of Icaria and Frisland. Like Estotiland, Zeno credited his 14th century predecessors with the discovery of these mysterious islands which appeared first on his own 1561 map, and which were eagerly copied by later mapmakers thirsty for geographical data of this remote part of the world. Despite Zeno's work being a fraudulent Venetian attempt to co-opt the achievements of the Genoese Christopher Columbus, it remained influential in the 16th and 17th centuries absent better cartographic reconnaissance of the North Atlantic. Not only Ortelius, but his competitor De Jode, and the Dutch mapmakers of the early 17th century all swallowed the Zeno geography whole.

This is one of the earliest maps to illustrate Gerard Mercator's speculative Arctic Islands. When Mercator published his great wall map introducing the famous Mercator Projection in 1659, he recognized the essential problem with his map was that it massively distorted the polar regions. To rectify this, he included a polar projection as in inset on the map. It was this small projection, later refined in his 1595 Arctic map, that introduced Mercator's idea of four arctic islands surrounding an open Arctic sea, at the center of which was a great whirlpool. Two of those islands are visible here, one unnamed, and the other just north of Norway, labeled Pigmei hic habitant, for Mercator's assertion that it was the home of a race of female pygmies. The channel between the islands, possibly Mercator's interpretation of Davis Strait, was described as having violent currents. Variants on Mercator's arctic islands continued to appear in various forms well into the 17th century, until the discoveries of Spitzbergen and other Arctic islands began to disprove the speculation. The islands disappeared entirely in Hondius's 1636 Arctic map Poli Arctici et Circumiacentium Terrarum Descriptio Novissima.

This map was drawn by Abraham Ortelius and engraved by Franz Hogenberg for inclusion in the first modern atlas, Ortelius' Theatrum Orbis Terrarum. It appeared in all editions of that work, beginning in 1570. Based on the typography of the verso text, this example corresponds to the map appearing in the 1574 Latin edition of the Theatrum. The state of the recto appears to fall after van den Broecke's 160.1 (for example, the triangular full stop at the end of the title is present) but does not include all the changes he records for 160.2 (the instances of the place name 'Narna' have not been corrected to 'Narva') The map in its many editions is well represented in institutional collections, though only four of these correspond to this edition. These are catalogued at the University of Chicago, the Massachusetts State Archive, The Biblioteca Nacional de Espana, and the Queens University Library.

Ortelius, A., Theatrum Orbis Terrarum, (Amsterdam: Ortelius), French Edition, 1572.     Abraham Ortelius' magnum opus, Theatrum Orbis Terrarum, was the world's first regularly produced atlas, which 'set the standards for later atlases . . . It was the first undertaking of its kind to reduce the best available maps to an uniform format.' (Koeman) A modestly-sized work of fifty-three maps in its first edition of May 1570, it was an immediate success: there were three further editions that year, and the work remained in print for a total of 32 editions, the last of which was 1641, well after its author's 1598 death. Ortelius added to his atlas constantly, and by 1595 the Theatrum contained 147 maps. Ortelius is renowned generally as an editor, and indeed much of the Theatrum is compiled from a variety of sources: in such cases, Ortelius was scrupulous in naming his sources. But Ortelius was also a mapmaker in his own right: many of his maps are a distillation of various sources into his own work, and there were many maps - particularly in his atlas of Biblical and ancient history Parergon - which were entirely Ortelius' work. In his role as an editor, Ortelius followed in the footsteps of Munster, whose Cosmographia was, until Ortelius, the best window on the world for the curious European reader. In terms of the artistry of his maps, Ortelius oversaw the first great flourishing of copperplate engraving in the service of cartography to occur in Northern Europe. Ortelius' work provided the model for the atlases of Mercator, Hondius, Blaeu and all their progeny in the 17th century - many of whom were to produce faithful editions of Ortelius' maps in their own productions.