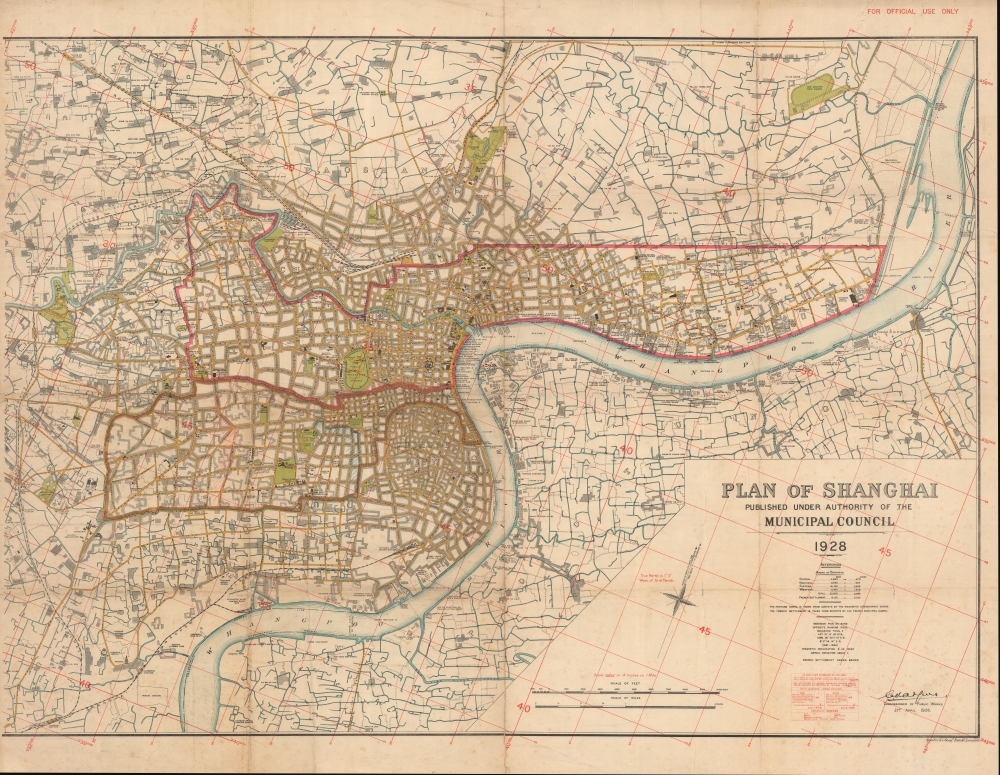 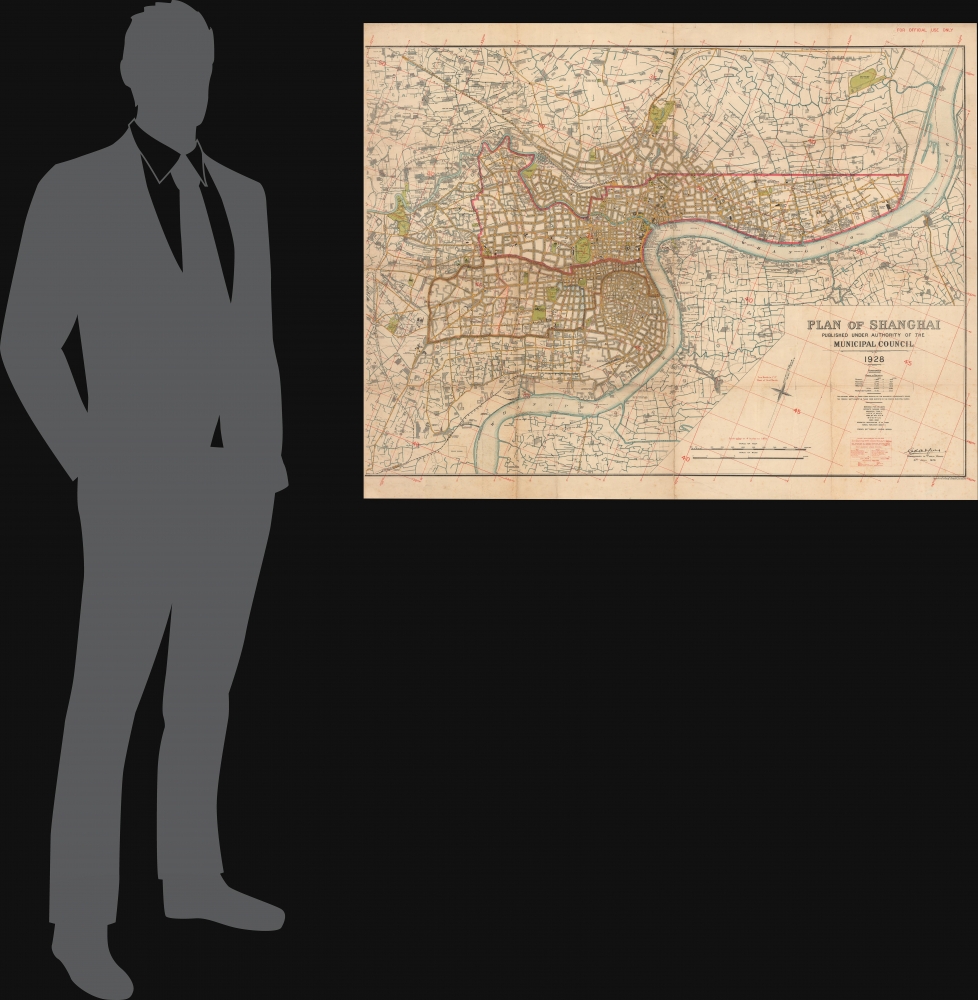 A rare 1928 large-format map of Shanghai produced by Stanford's Geographical Establishment for the Shanghai Municipal Council. It provides an excellent overview of the city, including its Chinese-administered areas, at the height of the treaty port era, when Shanghai emerged as one of the main commercial and financial centers in Asia.

This map covers the extent of the built-up areas of Shanghai, clearly demarcating the city's three administrations: the International Settlement (governed by the Shanghai Municipal Council), the French Concession, and the Chinese administered portions of the city, which surrounded the foreign concessions. The cosmopolitan character of the city is immediately apparent, with social clubs, religious institutions, schools, cemeteries, and businesses operated by the range of Chinese and foreign groups who comprised Shanghai's population.

An intricate grid system overlays the map, explained by a box at the bottom-right, suggesting it was used for urban planning purposes. A series of dashed lines runs along the Rue Amiral Courbet and the Route Raymond Tenant de la Tour, while blue dashed lines run along several streets further into the French Concession, towards the Huangpu River. These likely indicate earlier boundaries of the French Concession, which expanded several times, most recently in 1914, up to the edge of Xujiahui (Siccawei), a missionary complex run by French Jesuits. The area of the foreign concessions, including districts of the International Settlement, are given in acres and 'mow' (mu 亩), a Chinese unit of measurement equal to about 666.7 square meters.

Shanghai in the Treaty Port Era

Although it was already a sizable port by 1842, Shanghai expanded at a tremendous pace when it was designated a treaty port after the First Opium War (1839 - 1842). British and French traders and missionaries were leased land outside of the walled 'Chinese City' (center towards bottom), particularly along the waterfront that came to be known as the Bund.

Due to the extraterritoriality clauses of the Treaty of Nanjing and subsequent 'unequal treaties,' over time the areas where Westerners resided effectively became exempt from Chinese jurisdiction. In 1862, the French split with the Americans and British, creating a distinct French Concession, causing the 'Anglos' to form the International Settlement (divided at Avenue Edward VII and Avenue Foch, today's Yan'an Road). As a strategically located entrepot near the mouth of the Yangzi River, Shanghai quickly became a gateway to the entire Yangzi Delta. The light administration of the foreign concessions led to the city's reputation for economic dynamism, multiculturalism, crime, drugs, prostitution, and urban poverty.

The British influence was particularly strong in the International Settlement, but the city's elite was a cosmopolitan mix of Europeans, Americans, Japanese, Chinese, and others. Trading diasporas from across China and the globe set up shop there, including Baghdadi Jews, whose names (Kadoorie, Sassoon) were synonymous with Shanghai's high society. Since the exact sovereign status of the treaty ports was unclear, Shanghai became a refuge for Chinese fleeing the law or political repression, as well as stateless individuals and refugees, including White Russians and Viennese Jews fleeing the Nazis. Multiple nationalities also formed a subaltern stratum of police officers, servants, small business owners, and entertainers, including Parsis and Sikhs, Annamese, Koreans, Russians, Portuguese (Macanese), and Filipinos. However, the largest component of the city's population by far, including in the foreign concessions, were Chinese from near and far. Traders, absentee landowners, intellectuals, and professionals composed the Chinese elite and middle classes, while the city's working class tended to be migrants from the nearby countryside or further north in Jiangsu Province.

At the time this map was made, the laissez-faire, cosmopolitan treaty port system was at its peak. However, recent events hinted at the ultimate collapse of this system. One set of events related to the rise of Chinese nationalism, driven by a desire to reunify the country and undo the 'humiliations' of the past century, including the treaty ports. In 1928, a project of national unification was being finalized, with nearby Nanjing designated the capital of a government led by the Nationalists (Guomindang). One of the Nationalists' first major projects was reorganizing the administration of Shanghai into the 'Greater Shanghai' Municipality, designed in large part to put pressure on the foreign concessions and the jurisdictional carve out they created. Although the Nanjing government could not administer the foreign concessions or tax their wealth directly, it used myriad methods, including violence and intimidation, to project its influence there.

China's national reunification was the result of the Northern Expedition, when the Guomindang and its military wing led by Chiang Kai-Shek moved up through eastern China from Guangzhou (Canton), battling disparate forces of rival warlords. In doing so, they were in an alliance with the Chinese Communist Party, which would launch general strikes in cities as Chiang's armies approached, making them easier to conquer. However, tensions between the Nationalists and Communists increased as the campaign progressed, and when a general strike was called in Shanghai in late March 1927, Chiang organized a purge, enlisting the powerful criminal Green Gang (which effectively ran the French Concession) to murder Communist agents and activists throughout the city.

Foreign elites in Shanghai were, like Chiang, alarmed by the growing influence of Communism among the city's large laboring classes. Periodic unrest and strikes had gained momentum in recent years, most notably in the May Thirtieth Incident in 1925, when the Shanghai Municipal Police opened fire on demonstrating workers, killing dozens of them. Thus, although foreign elites remained leery of Chiang, who was a nationalist to his core, they much preferred him to the potential alternative of a left-wing Chinese government.

The final notable development in the mid-late 1920s was the clear and increasing influence of Japan. Japanese business in Shanghai had expanded considerably in the early 20th century, and with it the number of Japanese residents (including Koreans and Okinawans) in Shanghai increased, reaching to over 100,000 during World War II. This posed a dilemma for the structures which had governed the city since the mid-19th century. Due to both racism and concern over Japan's increasingly strident militarism during these years, elements of the white Anglo-American elite of the International Settlement were hesitant to make space for Japanese representation on the Municipal Council, the Chamber of Commerce, and other key institutions. Still, shared interests and common fears (Communism, Chinese nationalism) bound the city's foreign elite together, at least until 1937, when Japan and China began a full-scale war, with Shanghai serving as the site of the first major battle.

This map was issued by (Edward) Stanford's Geographical Establishment in London for the Shanghai Municipal Council in 1928. It bears similarity with earlier maps of the same title (such as our '1918 North-China Daily News / Municipal Council Map of Shanghai ' and '1923 Municipal Council Map of Shanghai'), as well as a 1928 map by the local publishing house Kelly and Walsh (on sale by us as '1928 Kelly and Walsh Map of Shanghai'). The Library of Congress and Stanford University hold a 1928 map issued by Stanford's Geographical Establishment for the North China Daily News and Herald, Ltd., a local newspaper publisher, though it is smaller than the present map and some minor details differ.

Though the OCLC lists several 1928 maps titled 'Plan of Shanghai,' the dimensions of them do not align with the present map, and they appear to be either the Kelly and Walsh edition or the North China Daily News reprint. Additonally, there was likely a western sheet as well, not present here. Instead, this appears to be a very rare if not unique edition of the map, perhaps a 'master copy' produced for the Shanghai Municipal Council that was later published and distributed publicly. This interpretation is supported by the red 'For official use only' stamp at top-right as well as the complex grid system, which does not appear in the other two editions just mentioned.

Good. Wear along fold lines and at intersections. Light foxing, especially at bottom-left and bottom-right.
Looking for a high-resolution scan of this?