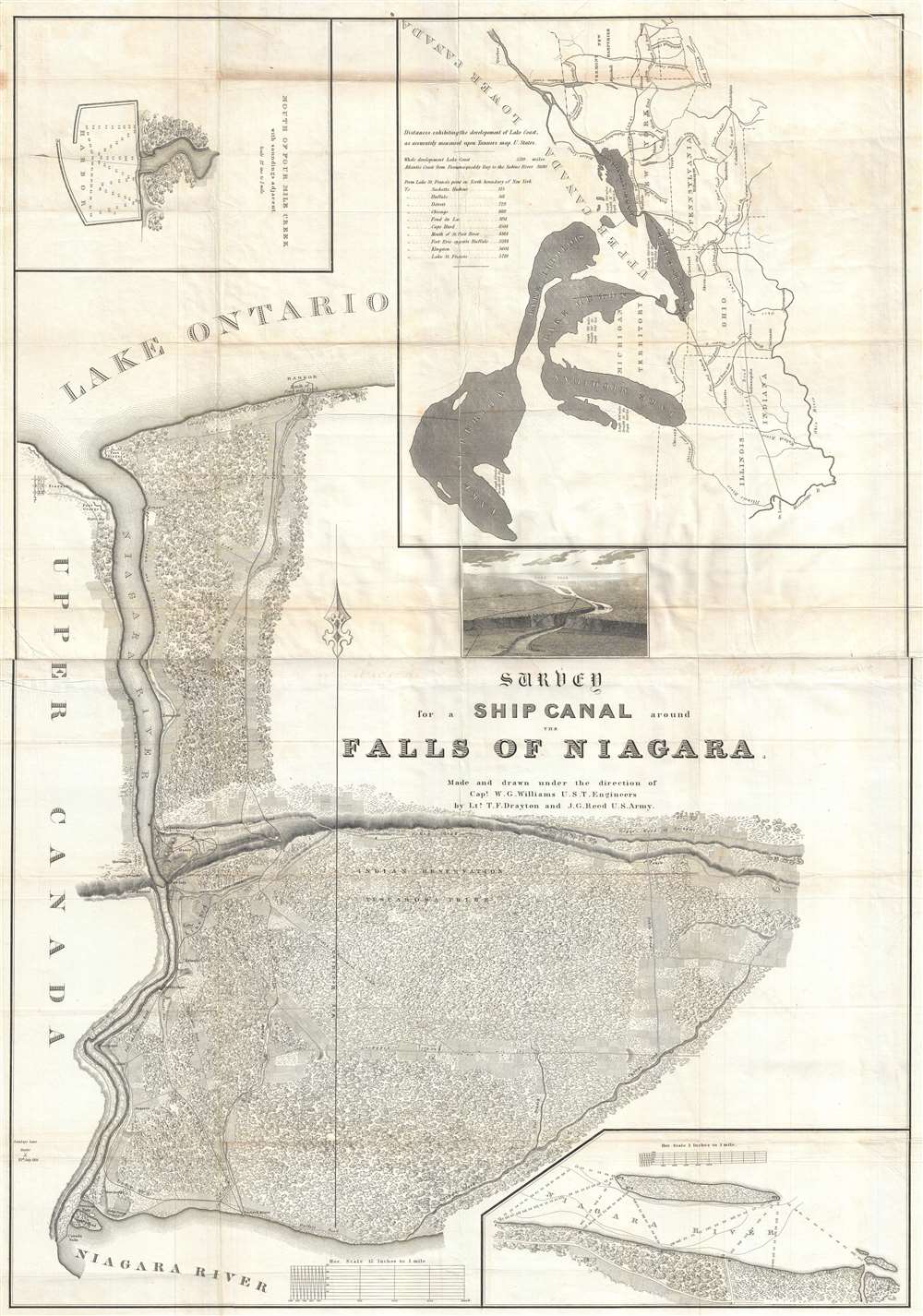 This is a stunning and important 1835 William G. Williams map of the proposed routes of a canal linking Lake Erie and Lake Ontario around Niagara Falls. The map depicts the region from the Niagara River just above Niagara Falls to Lake Ontario. Four different routes, or lines, for the proposed canal are depicted on the map. Captain Williams conducted a survey of the region to propose these four lines and included this map in his report to Congress.

Each line exhibits its own positive features, such as shortest total distance covered (Line No. 1) or shortest amount of excavation needed. All the lines shared the same starting point, Porter's storehouse on the banks of the Niagara River above the Falls. The descent of Lewiston Ridge (depicted on the map) could not be avoided, but the option of whether to use a single or double lock system was one of the many questions addressed in Captain Williams' report. Captain Williams also proposed the creation of an artificial harbor, labeled 'Basin' on this map, for Lines 1 and 3. These two lines would then 'debouche' into the Niagara River at Lewiston and continue to Lake Ontario by way of the river. Line No. 2, however, would cut across the plateau and descend the ridge at a different point. Line No. 2 would then follow 'Four Mile Creek' and 'debouche' directly into Lake Ontario. This plan would require the creation of a harbor in Lake Ontario. Line No. 4 was a hybrid, incorporating most of Line No. 3, before cutting cross-country along Fish Creek to join the proposed route of Line No. 2.

A highly detailed depiction of the region is provided, with forests and farmland illustrated. Towns and roads are labeled, along with waypoints on the different lines proposed by Captain Williams and the Army Corps of Topographical Engineers. Both the American Falls and the Canada Falls are labeled, in the lower left corner, as well as Goat Island, which separates the two.

Three inset maps are placed along the borders. One depicts the proposed harbor at the mouth of Four Mile Creek and includes depth soundings. The second is a map of the entire canal system in the United States from the East Coast to the Mississippi River, which labels the canals, the states they traverse (including the Michigan Territory), and the Great Lakes. The last is a magnified view of a section of the Niagara River. A view is also included, below the inset map depicting the canal network. The view presents the region from Lake Ontario looking toward Lake Erie. All the lines for the proposed canal are depicted, along with Niagara Falls. This view allows for a better understanding of the challenge presented by the descent of the ridge near Lewiston and for better spatial understanding of how the proposed lines fall with respect to one another.