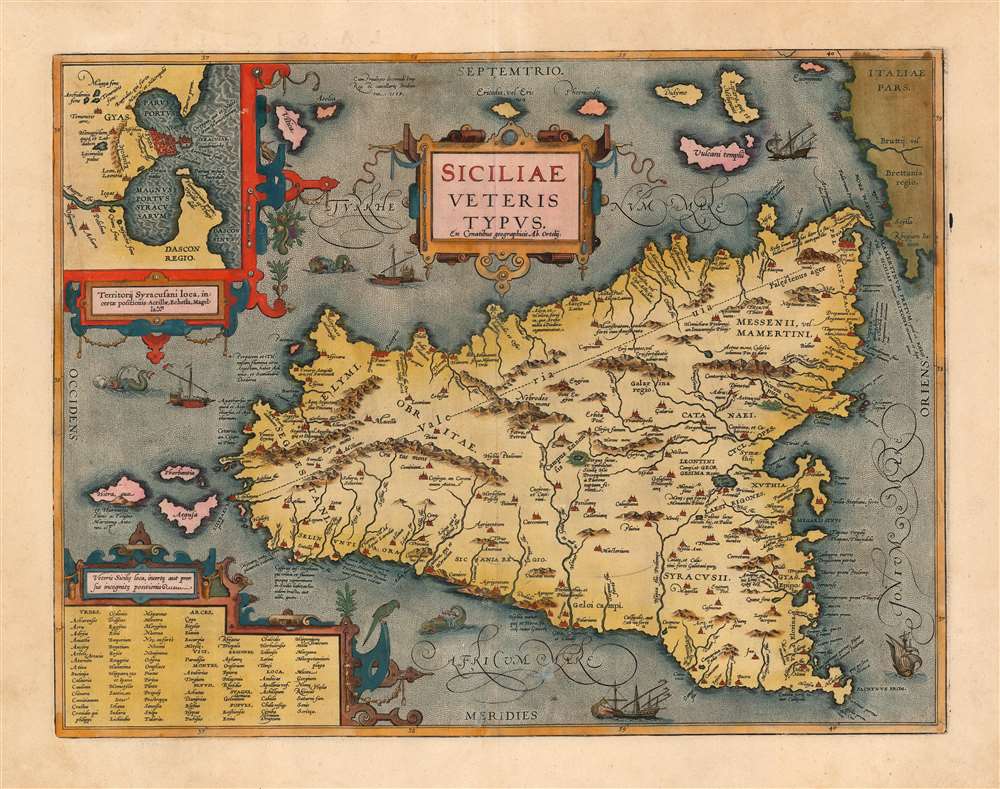 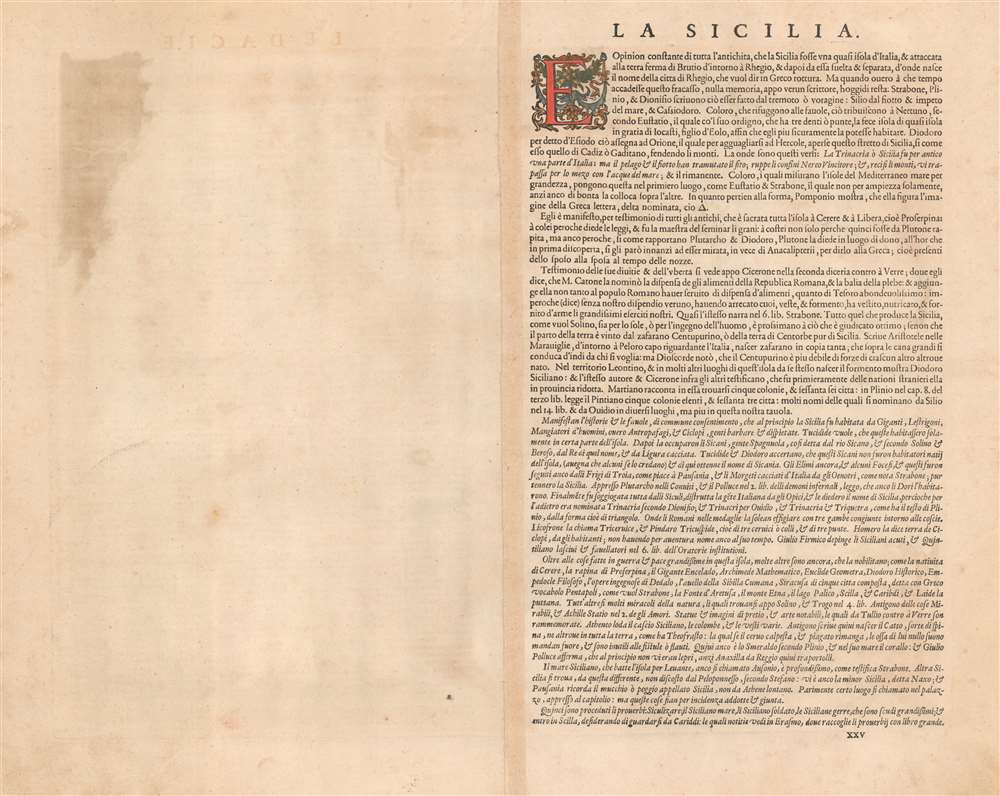 This is a superb example of Ortelius' map of Sicily as it was known in antiquity. The map is noteworthy for highlighting Ortelius' scholarship as a historian, as well as for denoting the locations of many sites from classical antiquity and mythology. This example is noteworthy as being from the Jan Bapatista Vrients (1552 - 1612) edition, which are known for exceptionally rich original colorwork.

Ortelius is well known as a compiler of maps - most of the maps in his Theatrum were carefully sourced from the best sources available to him and cited. He was himself an eager historian, and his maps in his classical and Biblical atlas Parergon tended to be the product of his own research distilling classical sources such as Strabo and Ptolemy. Koeman's gloss on the work explains:

'This atlas of ancient geography must be regarded as a personal work of Ortelius. For this work he did not, as in the Theatrum, copy other people's maps but drew the originals himself... He took many places and regions from the lands of classical civilization to illustrate and clarify their history, a subject very close to his heart... The maps and plates of the Parergon have to be evaluated as the most outstanding engravings depicting the wide-spread interest in classical geography in the 16th century.

The present map is a superb example of Ortelius' historical geography. The basic geographical model for the map of the island is drawn from Giacomo Gastaldi's 1545 map of Sicily, but the place names and much of the topography are drawn from Ortelius' own interpretations of classical sources.

A View of Classical Syracuse

The upper left of the engraving contains a strapwork-framed inset map of the city of Syracuse and its immediate vicinity, derived largely from the reports of Virgil and Thucydides. The details include the Fountain of Arethusa, the fountain on the island of Ortygia in the historical center of the city. This fresh water fountain was reputed to be the place where Syracuse's patroness, the nymph Arethusa, returned to earth's surface after escaping from her undersea home in Arcadia.

Many of the features included here are of concrete historical nature, although some of are placed with more confidence than was deserved. For example, Ortelius places Sicily's Via Valeria running straight from Lilybaeum (modern Marsala) to Messina (The Via Valeria actually hewed to the coastline.) Much of the detail comes from the pages of Greek mythology. The volcano Aetna is here noted as the 'Pillar of Heaven.' At the center of the island appears 'Lake Pergus, also the navel of Sicily. Here Prosperina was captured by Pluto.'The lake does indeed exist. It is the site of the famous racetrack Autodromo di Pergusa the ruins of an old fortified village, with walls constructed around the 9th millennium BC, and an ancient temple most appropriately dedicated to Demeter. (Demeter being the mother of Persephone, the Greek analog for Prosperina.) Of the coastline northwest of Messina, it is noted that in antiquity it was believed the cattle of the sun god were stabled there (the same cattle of Helios molested by Odysseus' crew, incurring their divine punishment and Odysseus' unendurable servitude to the nymph Calypso.) The passage between Sicily and the tip of the Italian boot features the sites of the Homeric Scylla and Charybdis, the twin perils that menaced Odysseus back when he still had a ship and a crew.

Ortelius' map was engraved in 1584 and appeared in all subsequent editions of Ortelius' Biblical and historical atlas, Parergon, which was itself generally bound into Ortelius' Theatrum. This specific example matches van den Broecke state 5, and typographically corresponds to the map appearing in the 1608 Italian edition of Theatrum / Parergon. This edition was published by Ortelius executor, Vrients, whose editions of the atlas are prized for their unusually rich and beautiful hand coloring (evident in the present example).